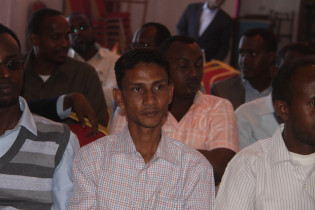 By Abdurrahman Warsameh
Somalia’s journalists say that the government is not serious about reviewing the country’s new, controversial media bill that requires them to reveal their sources, despite a series of recent consultations.

By Abdurrahman Warsameh
When journalist Mohamed Ibrahim Rageh was shot by unknown assailants outside his home in the Somali capital Mogadishu on Apr. 22, his name was added to a list of four journalists who have been killed in this Horn of Africa nation since January.

By Abdurrahman Warsameh
Media advocates in Somalia worry that a recent case against a journalists who exposed the story of a gang rape involving members of the national security forces will serve as a deterrent to journalists countrywide.

By Abdurrahman Warsameh
With vehicles and donkey carts packed with their belongings, Somalis are returning, four years after they fled, to their partially standing, bullet-scarred and mortar-shelled neighbourhoods in former Al-Shabaab controlled areas of Mogadishu.

By Abdurrahman Warsameh
Armed groups are withholding aid and preventing Somali famine refugees from leaving camps to ensure the continued supply of food by aid agencies that they are presently selling on the open market.

By Abdurrahman Warsameh
The shelling and gunshots, once a common sound in Mogadishu, no longer ring out in the city's streets. The surprise withdrawal on Aug. 6 of the Islamist extremist group Al Shabaab from their stronghold in Mogadishu has meant that people now move about the city, for the first time in two years, without fear of constant attack.

By Abdurrahman Warsameh
Tens of thousands of starving Somalis have made their way to the government- held part of Mogadishu in search of food, but many parents have made the anguished decision to leave a child too weak to make the journey behind in hope of saving the others.

By Abdurrahman Warsameh
The suicide car bomb that struck Mogadishu Jan. 24, killing at least twenty people and injuring nearly fifty others is an explosive comment on the failure of the Ethiopian military deployment to Somalia two years ago to oust Islamist forces it believed represented "a clear and present danger" to Ethiopia.
ADVERTISEMENT ADVERTISEMENT