MOGADISHU, Jul 28 2011 (IPS) - As the first of food aid from the United Nations World Food Programme was airlifted into Mogadishu on Wednesday, it came too late for Qadija Ali’s two- year-old son Farah. 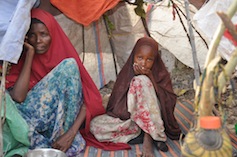 A mother and daughter who survived the dangerous journey from south Somalia to an aid camp in Mogadishu. Credit: Abdurrahman Warsameh/IPS

He died in his mother’s arms as Ali and her eight other children made the 16-day epic journey from their drought-stricken village in Wanlaweyn district, Lower Shabelle, in southern Somalia to Mogadishu.

“I carried him a whole day while he was dead thinking he was alive and just asleep. We did not have anything to give him. No water or food for three days,” an emotional Ali tells IPS at Badbado Camp on the outskirts of the Somali capital.

Ali’s family had 50 head of cattle, 20 goats and five camels before the onset of the current drought in southern Somalia that has raged for two years. Her family was one of the well-off ones in the region, where ownership of numerous livestock, the mainstay of a rural economy, is a sign of wealth.

“It started with (a) shortage of rains for the first three seasons and then no rains followed. Grass dried up, wells and rivers dried up. Our animals began dying one after another as there was no pasture or water for them,” Ali recalls as she carries one of her remaining three young sons who is weak and malnourished.

Camp Badbado, which in Somali means ‘rescue’, is the city’s largest settlement for the drought displaced people from southern Somalia. The U.N. Refugee Agency (UNHCR) says that it is currently home to an estimated 28,000 people, approximately 5,000 families.

Ali’s entire family is not with her, however. Her husband remained behind in their village to look after the family’s remaining belongings. Ali is not aware of her husband’s fate. But she made the arduous journey along with hundreds of other families to escape the severe drought and famine in search of aid.

But aid has come too late for some.

Many children arrive at the camp too weak and malnourished to be saved by doctors. Some children have gone for days without food and water.

Most of the children are too small for their age with a three-year-old having the frame and stature of a one-year-old.

“They come here very weak from hunger and exhaustion. Two or three children and adults die every week in Mogadishu, but we have no exact statistics as camps are located in diverse places in the town,” Muna Igeh, a nurse at Badbado, tells IPS as she weighs one of the dozens of malnourished children at the camp.

Daahir Gabow, a father of seven, had to watch as two of his children succumbed to severe malnourishment just after they arrived in Mogadishu.

He says doctors and nurses at Banadir Hospital, one of Mogadishu’s main health centres, did everything they could to save the life of his second child, a girl, but “fate had its way”.

He says his family had tried to “weather” the drought but could not this time and had to leave their home in search of aid.

“We tried to weather the drought as we did many other times but our livestock could not survive until the rains arrived. Many of our neighbours began leaving after losing all their livestock, so we decided it was time to go,” says Gabow as he prepared for the burial of his daughter who died of malnutrition complications.

“We walked for 21 days. (We) ate (and) drank what we could find and slept where the sun set on us. This is not what I have seen or (what) my father told me happened in his lifetime. (These are) testing times so we have to be patient and strong,” Gabow says.

Elhadji As Sy, the regional director of UNICEF (the U.N. children’s fund) for eastern and southern Africa, called the famine “a child survival crisis”.

Somalia is the country worst affected by a severe drought that has ravaged the Horn of Africa, leaving an estimated 11 million people in dire need of humanitarian assistance. Kenya, Ethiopia and Djibouti are all also facing a crisis that is being called the worst in 60 years. Last week the U.N. declared a famine in parts of southern Somalia.

The agency estimates that in total 2.23 million children in Somalia, Kenya and Ethiopia are acutely malnourished. The U.N. says it has delivered 1,300 metric tonnes of supplies to southern Somalia, including therapeutic supplies to treat over 66,000 malnourished children.

Meanwhile, people are still fleeing their homes in southern Somalia. The U.N. says almost 100,000 displaced people have arrived in Mogadishu, with nearly 40,000 of those in the past month.

“Over the past month, UNHCR figures show that nearly 40,000 Somalis displaced by drought and famine have converged on Mogadishu in search of food, water, shelter and other assistance,” says Vivian Tan, UNHCR spokesperson in a statement on Tuesday.

The U.N. estimates that the number is growing by the day, with daily arrivals averaging 1,000 in July.

The U.N. World Food Programme (WFP) on 27 Jul. began its first airlift of food aid to Mogadishu, the first such shipment since the Islamist extremist group, Al Shabaab, banned international aid agencies from operating in regions it controls.

The WFP flew in 14 tonnes of ready-to-use food supplements for malnourished children at the camps in Mogadishu.

Spokesman for the agency, David Orr, told reporters at Mogadishu airport that more aid will be flown in over the coming days.