MOGADISHU, Aug 16 2011 (IPS) - The shelling and gunshots, once a common sound in Mogadishu, no longer ring out in the city’s streets. The surprise withdrawal on Aug. 6 of the Islamist extremist group Al Shabaab from their stronghold in Mogadishu has meant that people now move about the city, for the first time in two years, without fear of constant attack. 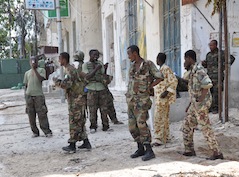 Though many are weary that the peace that prevails loosely over the city may not last for much longer as the group has vowed to return.

The end of fighting in the capital city, half of which was controlled by the Somali government with the aid of African Union peacekeepers, has yet to make a difference to famine relief efforts in the city. The withdrawal came as thousands, driven by drought and famine in southern Somalia, flock to the city in search of food, water, medicines and shelter.

The East African country is in the midst of a drought, which affects almost 11 million people in the Horn of Africa. Somalia is the hardest hit with the United Nations (U.N.) declaring famine in parts of southern Somlia.

However, aid agencies are yet to venture into areas previously under control of the Al-Qaeda linked militant group, and continue to work in the parts of Mogadishu controlled by the Somali government.

Also, government has warned residents to stay away from places that the Islamists fighters vacated as the radical group could have planted bombs there.

But doubts remain if the retreat by the extremist group, which until recently banned international aid agencies from working in areas under its control in south Somalia, will make aid delivery to the needy any easier in the long haul.

“Only time will tell if the group is finished or just badly bruised. But their disappearance could at least help the humanitarian effort to aid the drought and famine victims in the short term,” Mohyadeen Abdi, a political commentator in Mogadishu, told IPS.

“The withdrawal, if genuine, is a welcome move for the efforts to reach the thousands of hungry people who (fled) to Mogadishu. But if fighting and violence continue in another form, that is not going to help the situation,” Ibrahim Yahya, a humanitarian adviser for local non-governmental organisations in Mogadishu, told IPS.

The U.N. estimates that almost 100,000 people who fled the drought and famine in southern Somalia have arrived in Mogadishu over the past two months, with almost 1,000 people arriving daily.

Aid efforts have now picked up in Mogadishu as international humanitarian agencies, and some donors from the Arabian Gulf and Turkey, began airlifting aid into the city. But local aid workers say the supplies are not enough to meet the huge demand in Mogadishu.

“Now that the Islamists are at least out of sight and out of the way, for the most part, why are aid agencies spending a fortune just to bring in a few tonnes of aid by planes when they can (ship in aid)? Only shiploads of aid will meet the huge and ever-growing demand for assistance,” a local aid worker who sought anonymity told IPS.

“Here people are dying and agencies are just trickling aid in by planes when what we need is hundreds of thousands of tonnes to feed the hungry and treat the dying. Believe me, people are still dying in the camps when the aid agencies are just talking and talking,” the local aid worker added. The Islamist group is reportedly preventing people from leaving drought-stricken areas under their control to search for aid in camps in neighbouring Kenya and Ethiopia and even in Mogadishu.

“I don’t have the exact figures but I am aware that the flow of refugees into camps outside Al Shabaab’s territory has now been falling. We know the group has always been opposed to people leaving to seek help from what they see as the ‘enemy’ (western aid agencies),” Yahya said.

Meanwhile, residents in Mogadishu have largely welcomed the departure of the feared radical group. A number of families who fled the city two years ago when the insurgency began went back to visit their former homes.

“The place was very different. Grass and bushes grew all around homes, including ours. Some are now partly or completely destroyed, explosives are everywhere and that poses a danger to our children if we have to return here. I don’t think I will bring my family back here soon,” Jama Hassan, a father of five, told IPS.

His family now lives on the outskirts of Mogadishu along with 1.5 million of the city’s residents who sought refuge from the violence in the capital.

Experts here agree that in the coming weeks Al Shabaab will launch terrorist attacks on the city.

“I think Al Shabaab … will continue carrying out attacks. I am not sure how strong or how deadly they will be, but the group has hard core fighters who may be willing to make the ultimate sacrifice for their wicked cause,” Mohamed Awal, a political analyst in Mogadishu told IPS.

Spokesman for Al Shabaab, Ali Mohamoud Rageh, said in the early hours of Aug. 7 after the group retreated, that the withdrawal was a tactical move and they would return.

“We have not gone. We will be back,” Raageh, told a pro-Islamist radio station.

Somali President Sheikh Sharif Sheikh Ahmed, however, was quick to claim that his forces and AU peacekeepers defeated the group in Mogadishu and said they would pursue them in their own territory.

The U.N. envoy to Somalia, Augustine Mahiga, in a statement on Aug. 6 said the group should not be underestimated.

“It is important that we acknowledge that real security risks, including from terrorist attacks, remain and must not be underestimated,” Mahiga said in the statement.