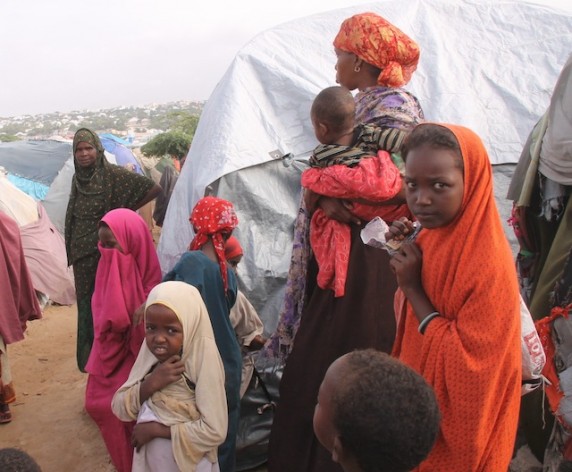 Almost 400,000 famine victims who fled to the Mogadishu for aid at the height of famine, are still living in one of the many refugee camps outside Mogadishu. Credit: Abdurrahman Warsameh/IPS

MOGADISHU, Jul 20 2012 (IPS) - One-year-old Miriam Jama is a symbol of life in Somalia after the famine. Born just as the United Nations World Food Programme declared famine in this Horn of Africa nation a year ago on Jul. 20, Miriam has known no other life than the one in the Badbaado refugee camp, situated 10 kilometres outside the country’s capital, Mogadishu.

Weak and visibly malnourished, Miriam, like the rest of her family, hardly have enough food to eat.

And like the almost 400,000 famine victims who fled to the city for aid at the height of the crisis, Miriam, her parents and four siblings are still living in one of the many refugee camps outside Mogadishu.

Here they live in squalor in a tiny shelter of only two square metres, in a camp that is run by self-appointed administrators who are often accused by the community of stealing aid.

“We get barely enough to keep alive. Famine may have ended, but for us hunger has not,” Hawa Jama, Miriam’s mother, tells IPS.

Jama says that her family receives only 25 kilogrammes of grain, 25 kgs of flour, and 10 litres of cooking oil for a month. It is hardly sufficient to feed this family of seven. But they are not the only ones hungry here.

As the WFP marks one year after famine was declared in Somalia on Friday, Jul. 20, hundreds of thousands of famine refugees living in camps outside of the capital say they still face hunger and desperation. The famine has claimed tens of thousands of Somalis, was declared in the war-torn nation as a result of a severe drought. The drought had been prevalent in entire Horn of Africa and was described as the worst in 60 years. It was compounded by high food prices and instability in the region.

The WFP said on Jul. 18 that although there is currently no famine in Somalia and malnutrition rates have improved considerably over the last year, the situation remains fragile and progress could be reversed if aid is not sustained.

The U.N. Refugee Agency reported on Jul. 18 that the Somali refugee population has exceeded one million. Kenya’s Dadaab refugee complex alone houses 570,000 people. And 3.8 million people in Somalia remain in crises and are in urgent need of assistance, while an estimated 325,000 children are acutely malnourished.

Dense shelters spanning as far as the eye can see have remained on the outskirts of Mogadishu a year after the crisis began.

But life in the camps is a difficult existence as refugees complain that camp administrators and local officials steal food aid and practice nepotism and favoritism in aid distribution.

“I don’t like to complain, but this is a matter of life and death for us. Those responsible for running our camp are not giving us all the aid and favour others. We tell every foreign official who comes to visit, but nothing is done about our predicament,” Mumino Ali, a mother of seven, tells IPS at Sayidka camp in Mogadishu.

Water and sanitation are also poor at the camps as the number of toilets remains inadequate, and the water trucked in does not meet the international requirement both in quality and quantity, says Mohamed Ali, a local human rights activist.

“I think what we have achieved since the famine was declared back in July last year is that people are not now dying because of hunger. But hunger is still there and there are no systematic programmes to help refugees stand on their feet by creating income schemes and repatriating them back to their communities,” Ali says.

The food situation has worsened as international aid agencies scaled down their humanitarian operations after the U.N. declared the end of the famine in February. In addition, the Somali government’s national Disaster Management Agency, which was formed to deal with the famine, has been called ineffective and corrupt.

“The agency has not been effective in its work and is one of the agencies that failed the people in need. Corruption is widespread among the organs of government and this agency has its share,” a local aid worker, who asked for anonymity, tells IPS.

The official says “layers of corruption” from international agencies, their local partners, government officials, as well as those running the camps continues the cycle of hunger for the displaced refugees.

In order to survive, many of the famine refugees seek out odd jobs. But unemployment is already rife among the general population of Mogadishu where 20 years of war has left the economic infrastructure in tatters. Even children can be seen at the city’s local markets offering their services as shoe shiners, housemaids and even car washers, as they attempt to earn a living to support their families.

Jama’s husband is one of the many who spend their days trying to find odd jobs in the capital city where he knows no-one and where work is hard to come by.

She says that she and her husband, former subsistence farmers from Somalia’s Middle Shabelle region, just north of Mogadishu, would rather that aid agencies helped them find a sustainable way of earning an income than merely giving them aid.

“I don’t want to be dependent on handouts from aid agencies, which are never enough here. But I would be happy if I got help in working to support my family and go back to my village,” Jama says as she carries Miriam on her hip.

The little girl was born a month before her family fled their hometown in August 2011, and Jama is anxious for her to know another, less-harsh way of life.