MOGADISHU, Sep 5 2011 (IPS) - Masses of food meant for famine victims in Somalia are being stolen, an investigation has revealed. 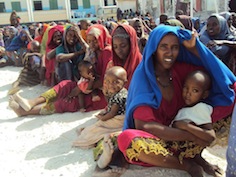 Mothers and their babies queue for food aid at the Raghe Ugas School in Waberi, Mogadishu. Credit: Shafi'i Mohyaddin Abokar

“There is widespread food aid corruption, that is why I am calling for the establishment of a special food aid monitoring group — this must include Somalis and the foreigners themselves,” Somali member of parliament Prof. Ali Mahmoud Nur told IPS.

The Somali government intends to fire all of Mogadishu’s 16 district commissioners amidst reports of food aid theft and insecurity. The government is planning to set up a special police force tasked with providing security during food aid distribution.

These measures were revealed as there have been recent reports of rioting and killings during food distribution at camps for famine victims. But it may not be enough to prevent the theft of food aid and there have been calls for government to set up a food aid corruption prevention unit.

Each day tonnes of food aid arrives in Mogadishu from across the world for the famine victims.

At least five cargo flights from Turkey and Kuwait arrive daily and other countries like Djibouti, Sudan, and Iran have also sent aid. Mercy USA, Diakonie Emergency Aid Bread for the World – Germany and the United Nations Refugee Agency are among the agencies distributing aid in the capital.

But Nur says the theft of food aid is so widespread that a special food aid monitoring group needs to be formed. Nur, a Somali-born U.S. citizen, has close ties with both the country’s Speaker of Parliament Sharif Hassan Sheik Aden and President Sheik Sharif Sheik Ahmed. He told IPS that he has personally investigated reports of aid corruption.

Over 100,000 people have fled the drought and famine in southern Somalia to the country’s capital in search of food and aid in the last few months. Many walked for weeks on foot, without food or even water, losing loved ones and children too weak or malnourished to survive the arduous journey. And those who survived arrived at the capital weak and malnourished. The U.N. estimates that the total number of internally displaced persons (IDPs) in Mogadishu is currently around 470,000.

But their hope of finding aid in Mogadishu has diminished as officials are now involved in the theft of food aid. “It is very clear that some officials are involved in food aid corruption here — I am calling on them to stop such bad behaviour or otherwise they will damage their dignity,” Nur said.

Addressing a peaceful demonstration in Mogadishu on Aug. 23, Somali Prime Minister Abdi Weli Mohamed Ali and the region’s governor, Mahmoud Ahmed Nur, admitted that food aid was being stolen in some areas in the capital and promised to address this.

One government official, who demanded anonymity, told IPS that the government intends to fire all Mogadishu’s 16 district commissioners.

The district commissioners have been accused of numerous crimes including colluding with the foremen of the refugee camps to steal aid. However, no one has been officially charged yet.

In Mogadishu the district commissioners are powerful former clan militiamen appointed by the government for their standing among the local clans.

They are a law unto themselves. On Sep. 3 in the district of Bulohubey, in Mogadishu, the local district commissioner Ahmed Adow Anshur’s (better known as Ahmed Daai) militia clashed with the Transitional Federal Government soldiers. Three government soldiers were killed. Sources say that it seems highly unlikely that the country’s transitional government will be able to fire the district commissioners as some are ‘powerful warlords’.

But Abdullahi Mohamed Shirwa, who heads the Somali government’s Disaster Management Agency (DMA), which is tasked to coordinate aid efforts in Mogadishu, believes that the food aid is properly managed.

Most international aid agencies distribute the aid themselves while the DMA manages the food donated by various international governments.

“There were a few tonnes of food assistance from Kuwait which was delivered to the IDPs through my agency — I can confirm to you that we have managed it well and made sure that it got into the hands of the really needy people,” he said, adding that the food aid coming to Somalia can only meet about 10 percent of the country’s needs.

But he acknowledged that mistakes were made at some IDP camps in Mogadishu.

On Aug. 22 three famine victims were killed at an IDP camp in Waberi district in Mogadishu, while four others were wounded as government forces fired on them during food aid distribution. Waberi is the first port of call in Mogadishu for refugees fleeing their homes in the drought-stricken south. But it is not the first incidence where people were killed during a food riot. Ten people were killed on Aug. 5 during a riot at Badbaado camp – the city’s largest camp for refugees.

Shirwa admitted that there were reports of looting and theft of food aid at some camps in Mogadishu, but he believes that about 95 percent of the food aid has been properly managed.

And he said those issues will be resolved soon as the Somali government has established a special security police force whose responsibility will be to tighten the security of food aid at the camps.

Soldiers are currently stationed around the aid distribution centres, but gangs, and even some government forces, have been accused of stealing food aid from famine refugees despite this security.

Amina Yusuf, a mother of four who lives at the Waberi district IDP camp, told IPS that armed men always rob them of their food.

“Robbing of food aid occurs here at least two times a week — we don’t know what to do,” Amina said.

But it is not just in Mogadishu that food is not reaching people in need. The Somali government’s relief inspector for Mogadishu and two of the worst drought-hit southern regions, Lower Shabelle and Middle Shabelle, Mahmoud Dahir Farah, said that his office had gathered evidence that food aid is not being properly managed.

Farah, who is appointed by the Somali government to coordinate the relief operations in these regions, said unfortunately people in need were not receiving food aid as intended.

“I am calling on the top Somali leaders to tackle this problem, because the food aid distribution is corrupted by the administrators in Mogadishu districts – this is a great problem, which has to be solved as soon as possible,” he said.

He also demanded that the government soldiers who killed IDPs at the Badbaado camp early this month and in Waberi district on Aug. 22 be brought before a court.

The U.N. has estimated that more than 3.6 million people in Somalia are currently in need of emergency humanitarian assistance as the region is in the midst of the worst drought in 60 years.