NAIROBI, Aug 18 2011 (IPS) - Jamaal Abdi, an eight-year-old boy at the Badbaado camp on the outskirts of Mogadishu, would like to have an education. He has his own dreams for the future. 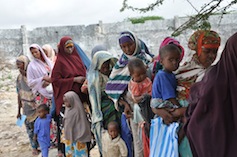 Mothers queue with their children at the Badbaado camp clinic. Except for a few Islamic schools, education at the camp is almost non-existent. Credit: Abdurrahman Warsameh/IPS

But since Abdi and his family arrived at Badbaado camp – the biggest camp for people displaced by the drought and famine in southern Somalia and home to nearly 30,000 people, mostly women and children – he has done nothing but sit around all day. But for Abdi, it’s nothing new. He’s never been to school.

“I learned from my friends how to write my name only. Now I just stay at the shelter and do nothing. I want to study because when I grow up I want to be a doctor and be a good man who helps people, sick people,” Abdi told IPS, as he played with his friends outside his family’s makeshift shelter at Badbaado.

Apart from a few informal Islamic schools where children are taught to memorise the Quran, education at the camp is almost non-existent as aid agencies prioritise feeding and treating those affected by the famine and drought.

And across the country the situation is no better. A rapid assessment conducted by the Education Cluster, which is co-led by the United Nations Children’s Fund (UNICEF) and Save the Children, warned that the number of children out of school, especially in southern and central Somalia, could double. The report noted that with an estimated 200,000 school-going Somali children have moved from their homes to other places in search for food.

But for more than 20 years, only 30 percent of Somali children have been able to go to primary school. It is the lowest enrolment in the world. This compares very poorly with its neighbour, Kenya, which has an enrolment rate of 92 percent in primary schools. However, primary education in Kenya is free while in Somalia it is not and many children have to get financial support from their communities to attend school.

But in September when schools reopen the number of children expected to attend will be lower than the already low 30 percent. In order to prevent this, the report estimated that over 20 million dollars would be needed in the next month for emergency intervention.

“Funding received to date is inadequate – while funding gaps in the education sector have reached their highest levels in the last four years,” UNICEF said.

Despite the tough climatic conditions and conflict in the country, Somalis have demonstrated that they know the value of education. Before the famine they ran schools by themselves in a war-ravaged country where the government has a tentative hold of power.

“Schools in Somalia are run by communities since there is no ministry of education. With support from humanitarian organisations, they give incentives to the teachers and donate funds for running school programmes,” said Lisa Doherty, UNICEF’s education specialist and programme manager at the Integrated Capacity Development for Southern Somali Education Administrations. Following the famine in parts of the country, most of the support from the international community has been to supply food and medical assistance.

But according to Doherty, there is a need to attend to all the needs of a child, and education is an important need. Rozanne Chorlton, UNICEF’s Somalia representative, echoed her sentiments and said that education is a critical component of any emergency response.

“Schools can provide a place for children to come to learn, as well as access health care and other vital services. Providing learning opportunities in safe environments is critical to a child’s survival and development and for the longer term stability and growth of the country,” said Chorlton in a statement.

Humanitarian organisations are setting up schools in some camps.

“At UNICEF alone, we are supporting 155 schools in camps of internally displaced persons, which at the moment benefits 37,000 students – 40 percent of them girls,” said Doherty.

However, there are plans to expand the number of classes subject to the availability of funds. But until schools reopen, the available classes are being used to provide psychotherapy for children and their parents who have been through traumatic times.

“(These children) will grow to nothing and will be a further burden to society if education is never made part of the humanitarian effort,” Burhan told IPS.

Burhan, a father of four, was a teacher in a private school in Lower Shabelle Province, one of the five areas where the United Nations declared a famine.

He and his family have been at the camp for two months. Burhan said he tried to find work as a teacher at the camp but could not find any schools. So he teaches his children himself, but believes other children should also have the benefit of an education.

“Saving lives should always be a priority but educating the children and even the adults will go a long way in preventing a similar crisis in the future,” he said.

Most of the healthy children wonder around Badbaado camp with nothing to do. They told IPS they would attend school if they had the opportunity.

Many parents at the camp say that educating their children is as much a priority as feeding them is.

Muna Ali, a mother of eight, says none of her children go to school but would like them to be educated as well as fed at the camp.

“I really want to educate my children once they are well fed and I believe that is the only way we can win over poverty in our communities. I will be the first to send my children to school if they can also be fed at the school … our children are hungry for food and for education,” said Ali as she stood in a queue waiting for her youngest child to be seen for a medical checkup at the camp clinic.

Latest reports indicate that people from central and southern Somalia are still fleeing to Mogadishu for aid. Meanwhile, arrivals to Kenya’s Dadaab refugee camp continue to average 1,300 daily. But arrivals at Ethiopia’s Dollo Ado camps have slowed to 270 daily, according to the latest report by the office of the United Nations High Commissioner for Refugees.

However, on Aug. 3, the Food and Agriculture Organization’s (FAO) Food Security and Nutrition Analysis unit declared that the situation in Somalia had deteriorated to famine in new areas. This includes the Afgooye Corridor in northeastern Mogadishu, areas of high concentration of internally displaced persons in Mogadishu, and two districts in the Middle Shabelle region – Balcad and Cadale.

The FAO further reports that tens of thousands of people have died as a result of the ongoing famine, which is expected to extend to other new areas in the coming days.