MOGADISHU, Sep 6 2011 (IPS) - Armed groups are withholding aid and preventing Somali famine refugees from leaving camps to ensure the continued supply of food by aid agencies that they are presently selling on the open market. 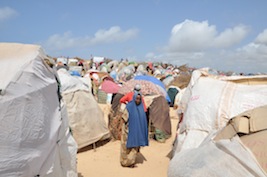 Armed gunmen running camps for famine victims steal their food and prevent them from leaving to search for aid elsewhere. Credit: Abdurrahman Warsameh/IPS

Since Mohamed Elmi, 69, and his family arrived at a camp for famine refugees in Mogadishu they have barely had enough to eat. Armed gunmen running the camp steal their food and prevent them from leaving to search for aid elsewhere, he says.

Elmi told IPS that this happens because aid agencies deliver food to the people running the camp for distribution and not to the famine victims themselves. And they are prevented from leaving because aid will no longer be delivered to the camps if they do.

“I don’t know who is running this, but we have said time and again that we are never, never given anything by the foremen running (the camp). Let them kill me if they want… We cannot leave here to find a better place,” an emancipated Elmi told IPS. He asked IPS not to publish the name of his camp as he fears for his safety.

Tens of thousands of desperately hungry Somalis displaced from the drought-stricken south are not receiving the food aid meant for them. Gunmen have set up unathourised refugee camps in Mogadishu just to steal the food delivered by humanitarian agencies. It is believed the food is being sold on the local markets.

There are dozens of camps with thousands of families in the bullet-scarred Somali capital of Mogadishu. Not all are official camps. These are often run by men from the local clan militias who divert famine victims entering the city to the ‘camps’ they have set up in deserted buildings in Mogadishu.

This is what happened to Mahad Iyo, 54, who arrived in Mogadishu in search of aid in August.

Iyo said that he and other displaced people walked for days to reach Mogadishu. At the city’s entrances they were greeted by armed gangs and were directed to a disused government building. The building was filled with refugees who had constructed makeshift tents using sticks and old ragged cloth. “They want to use us for their own benefit,” Iyo now says of the men who so eagerly offered him help when he first arrived. “We are not registered for the aid and neither are we given regular help. Food and other essentials are brought to the camp by the agencies but they are quickly taken away by the foremen,” said Iyo.

He said he would prefer to leave the camp and go back to his village in southern Somalia where he would be “better off dead”.

Mohamed Nur, a former clan militia leader, runs one of the many camps in Mogadishu and he agreed to speak to IPS to “set the record straight.”

Nur admitted that he has no experience in relief work and that he was not appointed to run the camp by either government or aid agencies. He said he took on the responsibility himself “after seeing the influx of desperate fellow Somalis.”

“Who will do this work if we don’t stand up to do it? The government is corrupt and the aid agencies don’t know our people better than we do. So we have set up this camp of 20,000 people, but the aid agencies never bring in enough food for the people,” Nur told IPS. He was flanked by Kalashnikov- branding gunmen outside the camp of barely 2,000 people.

Nur said he doesn’t keep a register of camp residents or of the food deliveries as he and his “co- volunteers” have no time for “useless paperwork”. He added that neither government nor the aid agencies require him to fill in any documentation.

Nur denied that he or others steal aid. But many people at Nur’s camp complained to IPS about the lack of assistance and food.

The head of the government’s Disaster Management Agency Abdullahi Mohamed Shirwa, which coordinates aid efforts to assist famine victims in Mogadishu, said the agency was “doing everything to deal with the issue and we are taking it seriously.” He added that there were only isolated incidents of theft of food aid.

“When disasters of this magnitude take place aid efforts are often haphazard and it takes time to deal with such problems, but my agency is working hard to do everything to deal with the issue and we are taking it seriously,” Shirwa told IPS.

IPS has learnt that some famine victims are leaving the government-run Badbaado Camp, which is situated on the outskirts of Mogadishu. Ten people were killed at the camp on Aug. 5 after armed men, allegedly from government’s military forces, tried to loot the aid being distributed to the camp residents. One aid worker told IPS that the population of the camp was now “at half, or less than half” its initial number of 4,000 families.

“People are fleeing because they see that they are never going to get justice, or protection, or help from the government,” the aid worker told IPS.

The government had condemned the killings at Badbaado camp and vowed to charge those involved, however, no one has been arrested as yet.

The United Nations estimates that almost 100,000 people arrived in Mogadishu this year after fleeing the devastating famine currently gripping southern Somalia. About 3.6 million people are in need of assistance in the war-ravaged country. The U.N. announced on Monday that the famine in Somalia has now spread to the Bay region of southern Somalia and 750,000 people face imminent starvation.