MOGADISHU, Jul 20 2011 (IPS) - Tens of thousands of starving Somalis have made their way to the government- held part of Mogadishu in search of food, but many parents have made the anguished decision to leave a child too weak to make the journey behind in hope of saving the others. 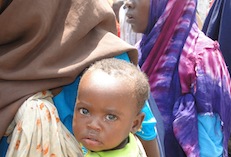 One of the millions of children in Somalia in need of food aid. Credit: Abdurrahman Warsameh/IPS

As many from the south abandon their homes and make their way to the city’s capital to seek aid in the government-run part of Mogadishu, stories abound of the weak and the infirm dying on the long journey there. There are even stories of children being left behind because they were too weak to move. These were the “sacrifices” many families had to make in order to save their other children.

“Some have told us that some elderly people succumbed and died, while children unable to move, and on the verge of death, were left (behind) to save those who had a chance,” said Mohamed Diriye, a senior official at a local drought support group in Mogadishu.

Diriye added that most of the displaced have safely made it to Mogadishu and to refugee camps in neighboring Kenya and Ethiopia.

This comes as the United Nations declares famine in two regions of south Somalia, southern Bakool and Lower Shabelle. The U.N. estimates that about 2.8 million people are in the south but adds that nearly half the population of Somalia is facing a humanitarian crisis.

Somalia is the epicentre of a prolonged drought that has, for the past year and half, ravaged the Horn of Africa. The drought, which has also affected parts of Djibouti, Ethiopia and Kenya, was described by humanitarian organisations as the worst in six decades. United Nations High Commissioner for Refugees, Antonio Guterres, said during a visit to the Dadaab refugee camp near the Kenyan border with Somalia that the drought was the “world’s worst humanitarian crisis”.

Until now, it has been impossible for foreign aid workers to work in south Somalia as the Islamist rebel group, Al-Shabaab, which controls much of the south, banned aid agencies from operating in regions under its control in 2009.

The terror group only recently announced that they would lift the ban in order to allow aid to the drought-stricken communities. However, many of those in the south have already started fleeing the region to neighbouring countries and government-controlled parts of Somalia in search of aid.

The U.N. welcomed the news but said in a statement “the inability of food agencies to work in the region since early 2010 has prevented the U.N. from reaching the very hungry – especially children – and has contributed to the current crisis.”

Somalia does not have an effective central government and has been reeling from two decades of civil conflict. The current Somali government is propped up by almost ten thousand African Union peacekeeping troops, and controls only a little more than half the seaside Somali capital, Mogadishu. The Al-Qaeda- linked Al-Shabaab controls the remainder of the city.

Refugees continue to pour into the government-run part of Mogadishu after having made the perilous journey on foot from the south.

When they reach the city’s bullet-scarred, deserted buildings, not everyone is able to get help.

“My family lost all of our cattle, 50 of them, because of the lack of pasture and water. It did not rain for a year and half so the grass died. Wells, rivers and ponds dried,” Muse Elmi, a father of 10 told IPS in Mogadishu. His family fled from a village in Bakool province, in south Somalia, and had recently arrived at a newly-formed camp for people displaced by the drought.

The Somali government constructed the camp outside the city for those displaced by the drought, which it says is more congenial as assistance can be easily distributed to those in need by aid agencies, which are expected to run the camps.

But there is not enough place in the camps to house all those in search of aid and many of the arrivals have sought shelter in disused and dilapidated buildings in Mogadishu.

“We then had no other option but to walk for 15 days to Mogadishu. We hoped we will get support from the government and aid agencies, but so far we had little help.”

Elmi said since his family arrived in the capital, he was only given food aid once by a local non- governmental organisation, SAACID.

Exact figures of those arriving in Mogadishu from drought-affected south Somalia are hard to come by as government officials and local non-governmental organisations give different estimations. Some say there are 20,000 refugees from the south in Mogadishu, while others put the figure at around 30,000.

“We really cannot give you exact figures of the drought-displaced people who arrived, but they are almost in the thousands and are still pouring into the city in search of food and shelter,” said Diriye.

In stark contrast to the drought in the south, heavy rains have besieged the capital over the last week. For the displaced living in makeshift shelters, it has made life more difficult as many camps were flooded.

“We are crammed here. Me, my wife and our four children live in this small hut. Water seeps in everywhere in the roof and sides,” said Abdi Daahir, a refugee from the drought.

Five people have reportedly died since Jul. 15 as a result of exposure to the elements, while dozens were injured as the cold rains battered the city for a week.

Doctors at Mogadishu’s main hospitals say that they fear waterborne diseases could spread because of the collapsed sewage systems in the city and the huge pools of rain water that have formed near the hastily-formed camps, which lack toilets.

The Organisation of Islamic Cooperation was the first international humanitarian agency to distribute limited aid to drought victims in Mogadishu. Local support groups have also managed to galvanise Mogadishu residents to assist those displaced by the drought with food and blankets.

But the aid has not been enough. Some refugees have started begging in the streets of the capital, while others said they were contemplating moving to refugee camps in neighbouring countries where most aid agencies are operating.

International aid agencies, including the U.N. Children’s Fund, the U.N. World Food Programme and Doctors Without Borders, have pledged support to the drought victims.

Following the lifting of the ban on Jul. 6 on aid operations by Al Shabaab, some shipments of aid have already arrived in Islamist-run areas.