NAIROBI, Jul 18 2011 (IPS) - While Kenya struggles to cope with the influx of refuges fleeing the drought in Somalia, it is estimated that about 1,300 people arrive daily at the Dadaab refugee camp, the country is facing its own crisis of malnutrition and starvation. 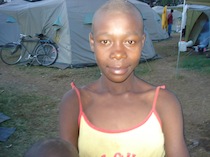 One of the many Kenyan children in makeshift camps who need food aid. Credit: Miriam Gathigah/IPS

It takes on average nine days in 50-degree Celsius heat for Somali’s fleeing the drought in their country to travel the 80 kilometres of the sandy, expansive desert that separates Dadaab in Northern Kenya from Somalia.

The journey to Dadaab is a treacherous one, made even more perilous as it snakes through territories of lawlessness where armed bandits and even police harass the refugees.

And when those who survive the journey finally reach Dadaab, they soon realise that the camp is far from the haven they hoped it would be.

In Kenya an estimated five million people across the country are facing starvation because of drought, according to Abbas Gullet, the secretary general of the Kenyan Red Cross.

In the northern part of Kenya, the local Turkana community is facing starvation, just like the refugees at Dadaab.

According to the United Nations Children’s Fund (UNICEF), from a population of about 850,000 people in Turkana, more than 385,000 children and 90,000 pregnant and breastfeeding women are suffering from acute malnutrition. This has increased the number of new admissions of children suffering from malnutrition to a staggering 78 percent.

“This is a very serious situation, across the region (Horn of Africa) more than 10 million people are affected. Of this, two million children are severely affected with half a million of them suffering from severe acute malnutrition and (many are) on the brink of death,” UNICEF executive director, Anthony Lake, says.

This comes less than two months after Kenya’s President Mwai Kibaki declared the drought a national disaster as the lives of people in Moyale, Turkana, Wajir, Marsabit and Mandera hang in the balance because of a lack of food and water.

“On my visit to Turkana, one of the drought-stricken regions, I saw a mother putting powdered palm nuts in her mouth in order to moisten the grains before putting the mixture in the mouth of her baby because of the lack of water … this is a crisis,” says Lake. He was speaking at a press briefing in Nairobi on Jul. 17.

The ministry of special programs and the Kenya Red Cross have been providing food aid to those most affected by the drought, but with the arrival of a high number of refugees, locals say that the aid focus has shifted to Dadaab.

“These are difficult times for both the refugees and the host communities who are facing similar hardships, and things are going to get worse because the rains have continued to fail,” explains Fatima Billow, a social worker in Mandera, Northern Kenya, which is near Dadaab.

Those asylum seekers who succumb to the heat and lack of water along the way to Dadaab are buried not far from the camp, in a makeshift graveyard. The graveyard serves as a reminder to the living that unless circumstances improve, death may also soon be their fate.

“Dadaab in Northern Kenya was built for a maximum of 90,000 refugees, the numbers are now at 423,000 and counting, with 50,000 more building makeshift camps around the refugee complex,” explains a source at the Kenya Red Cross. The camp was officially declared full in 2008.

And that is not all.

“More refugees are on their way,” says Doctors Without Borders nurse, Nenna Arnold. “We are already at bursting point, but the figures keep growing. This situation is a humanitarian emergency.”

As more and more people crowd the three camps that make up the Dadaab complex, the availability of essential services like water, food and basic sanitation is becoming inadequate to serve the numbers living there.

While speaking after a tour across drought-stricken Kenya, Andrew Mitchell, British secretary of state for international development, says that millions of people are staring death in the face as the Horn of Africa faces the most severe humanitarian crisis in the world.

UNICEF confirms that one in every three Somalis is living through a humanitarian catastrophe. Somalis have endured a long drawn socio-political crisis for about 20 years, which has led to the escalation of poverty, food insecurity and instability.

The situation in Somalia has spilled over to the neighbouring countries, particularly Kenya and Ethiopia, which are also dealing with millions of people who require urgent food and water relief.

This has led to a feeling of animosity from the host communities who feel that the refugees are competing with them for scarce food aid.

“The host community is now expressing frustration for what they see as negligence as the government and aid agencies rush to the rescue of the refugees,” explains Lake.

“The locals are wondering why there is a lot of attention to help refugees while our people in Turkana, Wajir, Mandera, Marsabit and other regions are suffering the same fate,” wonders Mohammed Abdi, a cattle trader who is counting his losses as more of his livestock succumb to the drought.

“We understand that the refugees need help. But we in Northern Kenya are not fairing any better. We are feeling very neglected, who feeds visitors in their home while his own children are starving?” asks Abdi.