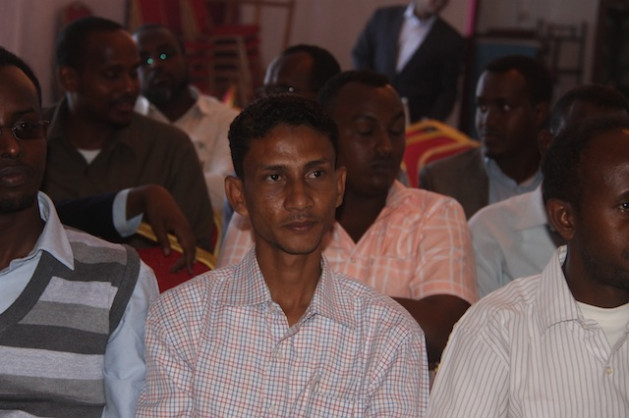 Somali journalists at a meeting to discuss the country’s controversial draft media legislation with government officials at the presidential palace in Mogadishu. Credit: Abdurrahman Warsameh/IPS

MOGADISHU, Aug 20 2013 (IPS) - Somalia’s journalists say that the government is not serious about reviewing the country’s new, controversial media bill that requires them to reveal their sources, despite a series of recent consultations.

Their concerns have been raised as another journalist, Ahmed Shariif Hussein, who worked for state radio and TV as an engineer, was shot dead by unknown gunmen outside his home on Saturday, Aug. 17 in north Mogadishu.

Somalia is one of the most dangerous places for media workers to operate. Six journalists have been killed this year alone and more than 15 were murdered in 2012.

None of the killings have been thoroughly investigated or the culprits punished.

“We are not saying let’s not have no law in this country, but we are demanding that our rights to press freedom and independent journalism be protected by the authorities.” -- Muse Jisow, editor-in chief of Somali news portal somalisan.com

But journalists now say that the country’s new media bill will make it almost unbearable for them to remain in this Horn of Africa nation. A number are already considering leaving if “the tough law” is endorsed by parliament.

“We stayed around thinking at least the law would finally protect us. But now that it is being used against us, I don’t think we can stay here any longer,” one Somali journalist told IPS on the condition of anonymity.

The proposed law requires journalists to reveal their sources and forbids them from disseminating information deemed as being against Islamic or Somali tradition, or which affects national security.

“As it stands the new law will oppress the media, curb press freedom, curtail freedom of expression, and impose restrictions on journalists’ ability to report freely,” Abdelrashid Abikar, press freedom coordinator for the National Union of Somali Journalists told IPS.

If accused of breaching the  law, journalists can be suspended from work until a court rules on the matter.

“What amazes everyone in the Somali media community is that the government has failed to recognise the situation of journalists who have to inform the public – even in the face of daily death threats. Why [is there] this government insistence on imposing such draconian laws on us?” one journalist based in Mogadishu told IPS.

In an attempt to address journalists’ concerns over the proposed law, Somali Prime Minister Abdi Farah Shirdon met media representatives at his office in Mogadishu on Jul. 18. And on Jul. 29, Somali President Hassan Sheikh Mohamoud met the media at the presidential palace.

Since then there have been subsequent meetings with various government officials, including the information minister, the most recent one being Thursday, Aug. 14.

Officials had promised to review the draft law in consultation with local media and bring it in line with international best practices.

But journalists have told IPS that they have withdrawn from the meetings with the information ministry, which is now in discussions with “bogus” media representatives, mostly from government-run media.

“I don’t think the government is serious about reviewing the new media law. They want to have the journalists’ stamp of approval for the cosmetic changes they are proposing and we refused that,” one Somali journalist, who took part in the meetings, told IPS on condition of anonymity.

Both local and international media watchdogs have voiced fears over the proposed law, calling the new legislation “vague” and “ambiguous”. Many say that it could expose journalists to a range of restrictions for ill-defined offenses.

“I don’t think Somalia will be any different from dictatorial regimes where press freedoms are non-existent, if the current law is implemented,” Muse Jisow, editor-in chief of Somali news portal somalisan.com, told IPS.

Jisow said that the Somali government should review the bill and bring it in line with international standards in order to safeguard freedom of the press here. Somali ministers approved the draft media law on Jul. 11 and it is expected to be debated by parliament in September.

Jisow called on Somali lawmakers not to pass the draft legislation until the “draconian articles” were weeded out and replaced with a more media-friendly ones.

“We are not saying let’s not have no law in this country, but we are demanding that our rights to press freedom and independent journalism be protected by the authorities,” Jisow said.

“I call upon Somali legislators not to approve the new media law because it is not in line with the national constitution, which guarantees press freedom and independent journalism in Somalia,” Jisow said.

But analysts believe that a watered down version of the current bill will be brought to parliament to be signed into law.

“I don’t think the Somali government will submit the new media law as it is now. [They] will have to amend it to accommodate concerns expressed not only by local journalists but international media watchdogs, including the United Nations,” Hassan Harun, a media analyst, told IPS.

Harun said that the government should take into account the views of the Somali media who will be subjected to the legislation, which will “add to the suffering of an already vulnerable sector of society”.