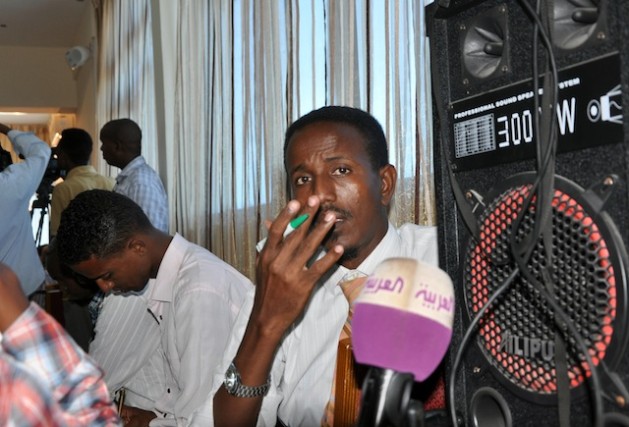 MOGADISHU, Apr 29 2013 (IPS) - When journalist Mohamed Ibrahim Rageh was shot by unknown assailants outside his home in the Somali capital Mogadishu on Apr. 22, his name was added to a list of four journalists who have been killed in this Horn of Africa nation since January.

Last year, 18 members of the media were killed across the country, according to figures from the National Union of Somali Journalists (NUSOJ) – the country’s largest.

But despite efforts by the Somali government, which earlier this year offered a reward of 50,000 dollars for information leading to the arrest and conviction of persons involved in the murder of reporters, analysts say that Somalia cannot protect its officials, let alone journalists.

Abdirashid Hashi, the deputy director of the Mogadishu-based Heritage Institute for Policy Studies, a non-profit policy research and analysis institute, says there is not much that the Somali government can do for the media.

“Frankly, I do not think that the government is going to do, or is able to do, anything special for any professional group, like journalists. It cannot do anything for its members of parliament, government employees, or National Security Service operatives who are killed day in and day out in Mogadishu. The government can only improve the general security,” Hashi tells IPS.

On Apr. 14, 30 people were killed in bombings near Mogadishu’s courthouse. And in March, a suicide car bomb meant for Mogadishu’s security chief Khalif Ahmed Ereg exploded near the presidential palace, killing 10 people, including a journalist. Ereg was not injured. The Al-Qaeda-linked Al-Shabaab claimed responsibility for both attacks.

While the Islamist extremist group has not claimed responsibility for the death of reporters here, it does maintain that those working for government media are “legitimate targets.”

Rageh, who worked for state broadcasters Radio Mogadishu and Somalia National Television, was shot several times as he stood at the gate of his home in Dharkenley district, western Mogadishu.

He died immediately, in front of his family. There have been no arrests.

His friend and colleague, Mohamed Nur Amiin, tells IPS: “We don’t know who will be next and who is targeting us. I leave my house everyday not knowing if I will return safely. And neither does my family know (if I will return).”

According to Reporters Without Borders, an NGO that protects the rights of media workers, Somalia is “one of the world’s most dangerous places for journalists.”

A reporter based in Galkayo town in central Somalia, who sought anonymity because he fears for his life, tells IPS by phone: “We place our trust in Allah because we don’t know who is killing us and why we are being targeted. And that is the worst part of it.”

But Hashi says that a lack of adequate resources, scarcely competent government personnel and an absence of effective security institutions are hampering the government’s efforts to improve security in the country.

He says that the insecurity is “part and parcel” of the situation in Somalia and that the media “need to try their best to stay safe as they are on their own, like most of us.”

But Rageh’s murder has resulted in renewed calls for an investigation into the assassinations of reporters here. According to NUSOJ and other international media watchdogs, including the Committee to Protect Journalists (CPJ), more than 50 reporters have been killed in Somalia since 1992.

“The government has made a firm pledge to root out the perpetrators who target journalists, and now is the time to honour that commitment by ensuring those responsible for Mohamed’s (Rageh) death are brought to book,” said CPJ East Africa consultant Tom Rhodes in a recent press release.

Few cases involving the murder of Somali reporters are brought to court and, to date, no one has been convicted.

Last February the government launched the Independent Task Force on Human Rights to tackle the “culture of impunity” over rights abuses, and “investigate the broadest range of human rights abuses, including the organised killing of journalists and sexual violence against women.”

The new body has a three-month mandate and will produce a report at the end of its term.

But the country’s NUSOJ says they were never consulted on the setting up of the task force and that it is “a mere PR exercise on the part of the government.”

Numerous calls by IPS to Somali government officials remained unanswered and those who did respond refused to explain the status of the body or its investigation.

Hassan Muunye, a political commentator in Mogadishu, says an independent investigation into the murder of reporters is required.

“We hear these calls (for an investigation) from every corner of the world every time a journalist is murdered in Somalia, but nothing seems to be done by the Somali government. Weak as it may be in its capacity to investigate, we have never heard it asking for help to protect journalists,” Muunye tells IPS.

Muunye says despite “the bravery of Somali journalists and their determination to tell the truth,” the ongoing murders of media members here could slowly lead to the silencing of reporters from this part of the world. He says that the killings are “the death of nascent democracy” in Somalia.

NUSOJ secretary general, Mohamed Ibrahim, says Rageh’s murder is another episode in “the nightmare” that Somali reporters live through.

“We have called upon the government to launch an independent investigation into the murders of our colleagues but so far we don’t see any concrete actions by the government,” Ibrahim tells IPS.

Despite the persistent danger to their lives, many journalists say they continue to work in the hope that they will make a positive contribution to their communities.

One journalist from Mogadishu tells IPS: “I have dreamed of doing stories that touch people’s lives and that is what I am doing for the people. I know the price and I am prepared to pay it because it is worth it.”