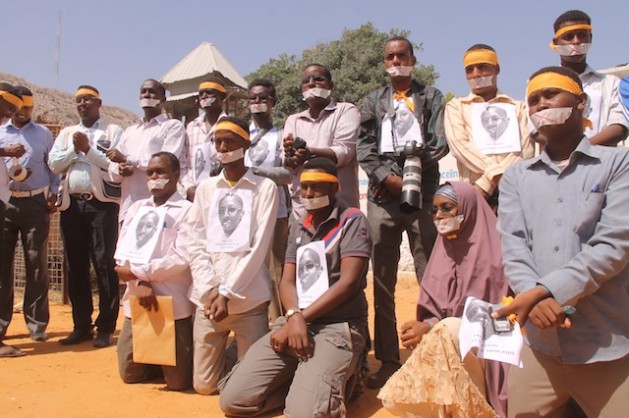 Somali Journalists protest on Jan. 27, 2013 against the arrest of their colleague Abdiaziz Abdinur Ibrahim who was arrested for the story of a woman who alleged that she was gang-raped by Somali government forces. Credit: Abdurrahman Warsameh/IPS

MOGADISHU, Feb 25 2013 (IPS) - Media advocates in Somalia worry that a recent case against a journalists who exposed the story of a gang rape involving members of the national security forces will serve as a deterrent to journalists countrywide.

Journalist Abdiaziz Abdinur Ibrahim was arrested on Jan. 10 for publishing the story of a 27-year-old woman who alleged that she was gang-raped by five Somali security forces in August 2012.

Ibrahim was detained for one month without charges, but was later charged along with the victim for “insulting state security forces”. Earlier this month a regional court in Mogadishu found both accused guilty and sentenced them to a year in prison. They case went into appeal, with a new verdict now being expected on Wednesday Feb. 27 by the Mogadishu Appeals Court.

“This will make journalists avoid venturing into areas that will lead them to risky stories such as this one,” Abdulahi Elmi, a media advocate in Mogadishu, told IPS. “And that has huge implications for the already-dismal press freedom situation in the country. It will definitely negatively affect and worsen the situation for local media workers.”

The case sparked an international outcry, with international rights organisation Human Rights Watch (HRW) calling for the government to drop its case against both, which HRW deemed “groundless”.

The National Union of Somali Journalists called the conviction “a serious setback” for press freedom.

But Somali government officials have repeatedly distanced themselves from the case, saying it was a judicial matter and insisting on the independence of the country’s judiciary.

Following Ibrahim’s arrest, however, President Hassan Sheikh Mohamud said that his administration would not tolerate negative coverage from the local press.

Local journalists who support Ibrahim told IPS that they would now think twice before interviewing people critical of the government or reporting on stories involving abuse by security forces.

“It was a clear warning for us,” a local journalist told IPS. He asked for anonymity because he feared reprisals.

“Our friend was treated badly just because he dared to listen to a woman who said she suffered injustice at the hands of those who were supposed to protect her.” 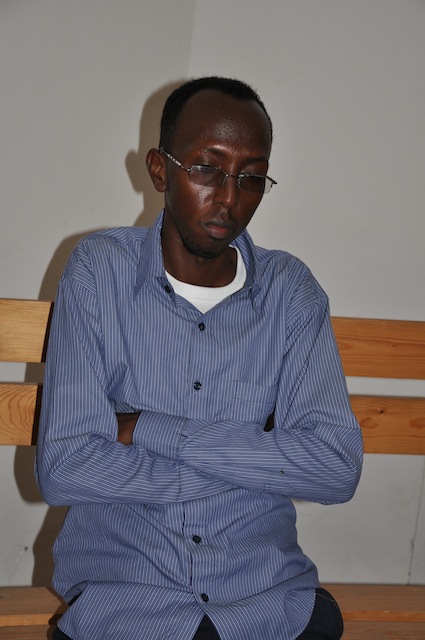 Abdiaziz Abdinur Ibrahim was arrested for publishing the story of a 27-year-old woman who alleged she was gang raped by five Somali security forces in August 2012. Credit: Abdurrahman Warsameh/IPS

Ibrahim is not the only journalist who has been arrested in connection with the case. Daud Abdi Daud was held by government police for nearly a week without charge for protesting in court on Feb. 5 against Ibrahim’s sentence. He was eventually released on bail on Feb. 12.

Daud told IPS that he was not allowed to see a lawyer and was not officially charged for any crime, although officials had told him that he was being held for “discipline”.

“The police took me to custody after I said journalists should be able to interview any woman, including the first lady, if she allowed it,” Daud said in Mogadishu after he was released on bail.

Abdi Aynte, director of the Heritage Institute for Policy Studies, an independent think-tank in Mogadishu, said the case showed that there was a need to improve media freedom here.

“In comparison to some of Somalia’s neighbouring countries, like Ethiopia or Eritrea, I think Somalia enjoys a considerable amount of freedom in terms of what people can say and in terms of what groups can say. But there is no doubt that the government could do more to improve that condition,” said Anyte.

According to the Committee to Protect Journalists (CPJ), Eritrea leads the world in imposing censorship on media. In 2012 the CPJ ranked Somalia as the second-worst country where journalists are murdered regularly and the killers go free.

A total of 49 journalists were killed since 1992 in Somalia, CPJ figures show, with 12 being killed in the last year alone. No one has been arrested in connection of the killings, according to the watchdog organisation.

But Anyte said that the government’s handling of the case had cost it a considerable amount of credibility.

In what is widely perceived as a diversion amidst increasing public scrutiny, the Somali government on Feb 3. announced the formation of an independent Human Rights Taskforce. The goal of the taskforce is to “investigate the broadest range of human rights abuses, including the organised killing of journalists and sexual violence against women.