MOGADISHU, Jul 15 2011 (IPS) - The appointment of a new prime minister in Somalia amid protests and a media crackdown will do nothing to resolve the country’s problems of corruption and cronyism, political analysts say. But they hope the new appointee may be able to do something about media freedom in the country. 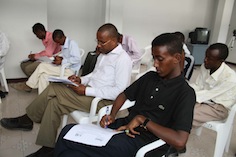 Journalism is a risky profession in Somalia. Credit: Abdurrahman Warsameh

Widespread violent protests broke out on the streets of Mogadishu and in the south and centre of the country in June in support of the country’s previous prime minister.

Mohamed Abdullahi Mohamed had enjoyed popular support as prime minister for his attempts to deal with the Somali Islamist insurgency, runaway corruption and insecurity in Mogadishu, which is one of the few places the weak Somali government controls.

But following the protests a number of journalists were arrested. And the spate of crackdowns on the media has made being a journalist in the country more risky.

Political analyst Mohamed Suley said that the appointment of Abdiweli Mohamed Ali as prime minister would neither bring about any change in the way local politicians work, nor solve the core problem of rampant corruption and cronyism in Somali politics.

“The change at the top or the sacking of the (previous) prime minister is nothing more than (a) cosmetic change that will not affect the way politicians conduct politics in this part of the world,” Suley told IPS in Mogadishu.

Ali, a Harvard-educated Somali-American and former minister of planning, was appointed prime minister in late June after an agreement had been reached between the country’s president and his rival, the speaker of parliament.

President Sheikh Sharif Sheikh Ahmed and the speaker of parliament, Sharif Hassan Sheikh Adam, had agreed that Mohamed would resign after Adam insisted that he could not work with him.

Mohamed, who was forced to resign on Jun. 19, was a close ally of the president and had often been at loggerheads with Adam on a number of policy issues. These range from the appointment of ministers – a role that is constitutionally the sole prerogative of the prime minister – to fighting graft. (Adam had allegedly been implicated in corruption during his previous post as finance minister.)

But Suley contends that apart from the first days of “show-making”, government will get back to business as usual and the infighting will continue to the detriment of the country, which is dealing with Islamic extremism, drought, famine, widespread disease and lack of schools.

Meanwhile, Ali is expected to name his cabinet in the next few days. He has said his new cabinet will be small and will consist mostly of technocrats, with perhaps a few key ministers from the previous government. However, despite criticism, Ali has promised to follow the same policies of his predecessor, who was widely accredited for his fight against corruption. Suley believes that although media freedom is not currently Ali’s priority, the prime minister, who hails from the United States, will do a lot to protect media freedom.

“The Somali media situation, in terms of its freedom and professionalism, has come a long way since the start of the independent press in the country back in the early 1990s. Hopefully that momentum of improvement in the media has reached a point of no return. It is self-perpetuating, in a sense,” Suley said.

Police would not elaborate on what Hassan had done, but the accusation is a general term used against journalists seen to be reporting unfavourably on the ruling elite and the semi-autonomous state.

Local and international media watchdogs condemned the ruling as harsh and called on the authorities for its reversal. But Hassan still remains in custody.

During the June protests in support of Mohamed six journalists were among an unknown number of people arrested while covering the event. The journalists were taken into custody and were held for 24 hours without charge and without access to their lawyers. They were finally released after pressure from local media watchdogs.

“We are working to inform the public about what is happening in the country but by arresting our reporters the security forces are trying to muzzle our coverage. But we will never be intimidated,” Ali Bashi, a senior staffer at Radio Kulmiye in Mogadishu told IPS.

Several reporters and photographers were injured early this year after a shell landed near parliament, following a barrage of mortars fired by the Islamist militant group Al Shabaab.

Media advocacy groups say that the risk faced by Somali journalists is further worsened by the lack of protective gear.

Most journalists don’t have protective flak jackets and helmets, which are often beyond the reach of local reporters whose meagre salaries barely cover essentials for their families.

“I have no other option but to go out to work on the frontlines without such protective stuff because I cannot afford it and I need to do my job. It sometimes happens those fighting against each other have bullet proof vests, while journalists have to (report on) the fighting (wearing) our shirts and trousers,” a journalist in Mogadishu told IPS.

Abdulahi Mohamed Hassan, director of the local Mogadishu Media House, says that press freedom in Somalia has come a long way. Over the years journalists have been gunned down and others injured while some were tortured in government prisons.

Al Shabaab, which controls much of the south and centre of Somalia, is suspected of having a hand in some of the deaths.

But the Al-Qaeda linked militant group has never openly taken responsibility for the murders. However, the group resents any opposition to its authority and almost all media outlets in areas under its control have either been closed by the group, or have relocated to Somali government-controlled parts of the country.

But the working conditions for journalists in the government-controlled parts of the country are not ideal.

Hassan told IPS that on occasion government security forces detain journalists on ‘the spur of the moment’ for the feeblest of reasons, mostly because of a lack of awareness about press freedom.

“We never tolerate any suppression of the media’s right to freely and openly report (the news) because the current national charter guarantees freedom of speech and press,” Hassan said.

“We mostly manage to get media people released and outlets reopened soon after we hear of any arrests or closures of radio stations. The authorities here are mostly cooperative with us on these issues. But we also need to educate our journalists as to the legal and right way of covering news, and of their rights and obligations under the law of the land,” he said.