SOMALIA: Taking Schools Back From Militants

MOGADISHU, Dec 25 2011 (IPS) - Schools are beginning to re-open slowly in areas of capital Mogadishu that were until recently controlled by the militant Islamic group al-Shabaab. But an estimated 80 percent of students have not yet returned. 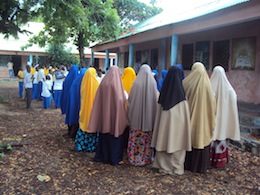 Girls at most schools in Somalia are ordered to wear an Islamic dress. Credit: Shafi’i Mohyaddin Abokar/IPS.

Schools are beginning to re-open slowly in areas of capital Mogadishu that were until recently controlled by the militant Islamic group al-Shabaab. But an estimated 80 percent of students have not yet returned.

The government is moving also to create a unified syllabus for all schools. Al-Shabaab controlled schools had been running a separate Islamic curriculum.

Eleven of Mogadishu’s 16 districts were under the control of the Al-Qaeda linked militants before their August withdrawal from the capital. Only 20 of the 78 existing schools in these districts have opened since September, but they are mainly empty as families slowly return to the capital.

Somalia was the hardest hit by the drought in the Horn of Africa with the United Nations (U.N.) declaring famine in parts of southern Somalia.

Sadeq Salaad, from the non-governmental organisation Formal Private Educational Network in Somalia (FPENS), told IPS that 78 schools in north and northeastern parts of the capital were closed because of the daily armed confrontations between Al-Shabaab and forces loyal to the government in those areas since mid-2009.

“According to our statistics only 20 schools in these war-ravaged areas have reopened and that is because of the small number of families which have returned to their homes in the city since August,” he said.

In Somalia, most schools are managed by the FPENS, as the Somali Transitional Federal Government has yet to gain control over them after years of war in this East African nation.

FPENS has been managing schools here since the country fell into anarchy in 1991 with the outbreak of the Somali Civil War. During that time there had been no central government control over the country.

“Another big problem is that so many schools were destroyed by the wars and they need to be rebuilt. There are some schools that were reopened but are partly destroyed,” Sadeq told IPS by telephone.

Boondheere district in the northeastern part of the capital is a former Al-Shabaab controlled area. Twelve schools here were closed during the militant group’s three-year siege of Mogadishu.

Mujama Umul Qura, which is said to be the largest school in this district with a capacity for 6,000 students, became the first school in the area to open its doors in October. But only a few students are enrolled here.

“At least 20 percent of our 6,000 students are currently here. We hope that all students will restart their education by January,” the school’s principal Sheik Hassan Mohamed Ahmed told IPS.

The International Islamic Relief Organization runs Mujama Umul Qura and the school curriculum differs from that of other schools in this area. It is a common occurrence in Somalia.

Somali Education Minister Ahmed Aideed Ibrahim told IPS that his ministry is currently attempting to combine the different curriculums being taught at Somali schools into one unified syllabus.

“We are in consultations with experts from the former Somali Education Ministry and we are discussing ways to unite the different curriculums used in the country. We hope to reach our target within the next eight months and we are very hopeful that the country’s former curriculum will once again be in place,” he said.

While students and parents say they are happy with the opening of some of the schools in the capital, most homes in the former Al-Shabaab controlled districts are in need of major repairs, and residents say this is one of the main reasons why more families are yet to return to the capital.

Hasna Abdulkader Farah, a mother of five, said that two of her sons would have graduated from high school on January 2011 if the country’s ongoing conflict had not affected their education.

“I am praying to Allah to punish Al-Shabaab in his hell, because they caused many problems for us. Praise be to Allah now we are safe and my children have returned to school,” Hasna told IPS.

Many other children in Somalia suffered a worse fate, as they were easy targets for militant recruitment.

Ibrahim told IPS that a large number of Somali children of school-going age have been used as combatants in country’s long-running conflict. He said that a lack of education was the main cause for the increasing number of child soldiers in this war-ravaged country.

Ibrahim said that his ministry is planning to build colleges and boarding schools for orphans and children from poor families in an attempt to prevent them from being recruited by militant groups.

“The Somali government is giving particular consideration to this sector, because lack of education has lead thousands of children to be very vulnerable to warmongers who have been monopolising them as warriors for the past two decades,” Ibrahim told IPS.

In the past, education was free in Somalia but Ibrahim could not say if his ministry would be able to continue with this.

Mohamed Abdullahi, the chairman of Somali Students’ Union (SSU), told IPS that the organisation welcomed the reestablishment of education in the capital.

“If there is no education it means we have no bright future, because when education is growing, the civilisation also grows. So the SSU is very much jubilant at the restart of education in the war-devastated parts of Mogadishu,” he said.

He called on the Somali government and the U.N. Educational Scientific and Cultural Organization to help rebuild the destroyed schools.