US: For Many Women, a Prison Sentence Also Means Abuse

WASHINGTON, Dec 6 2011 (IPS) - While most of the one million women in prison in the U.S. are incarcerated for non-violent offences, many experience harsh treatment that advocates say violates their human rights. 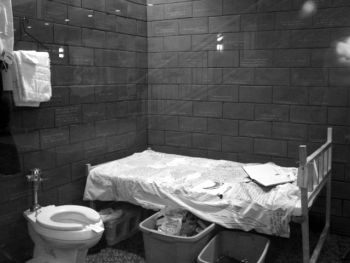 Artistic recreation of a woman's prison cell, part of the multimedia installation "Voices in Time: Lives in Limbo". Credit: Courtesy of BeyondMedia

But shackling is not the only treatment that defines many women’s experiences in prison in the U.S. One study found that 2.1 percent of female inmates experienced sexual misconduct by a staff member during a 10-month period, and advocates believe the real number could be much greater.

Tuesday is the twelfth day of the “16 Days of Activism Against Gender Violence“, a campaign organised by Rutgers University, and one of the themes of this year’s campaign is “sexual and gender-based violence committed by state agents”.

In the U.S., organisations looking at the issue maintain that violence against women in prison is so endemic that women, who many times suffer sexual abuse and battery in their own lives before entering prison, are being revictimised en masse through systemic violence.

In a report released in June, the United Nations Special Rapporteur on Violence Against Women highlighted “high incidents of verbal abuse and general mistreatment by both male and female guards, particularly by younger staff who are new”.

The U.N. report also highlights inadequate health care for female inmates and mental distress caused by “the continued parctice of cross-gender supervision and searches, the frequent lockdowns, the isolation of inmates, and the general agressive climate and verbal abuse prevalent within the facilities.”

Joanne Archibald is the associate director of the BeyondMedia Project, a Chicago-based media activism organisation behind the Womenandprison.org blog featuring the personal stories of women in prison.

She pointed out that while strip searches are carried out by same- gendered guards, male prison guards in the U.S. typically do have access to women prisoners’ living quarters, can do searches at any time, and carry out pat-downs.

Archibald believes the statistics on staff sexual victimisation in prison could be higher than official statistics reflect, as many women don’t speak up out of fear of reciprocity. If they report abuse, women also could also face the prospect of solitary confinement while investigations are carried out.

“Most people just suck it up and think ‘okay, I am going to get out of here some day’,” Archibald told IPS.

A cycle of abuse

From sexual violence to strip searches, such experiences can be devastating, especially for women in prison who have a history as victims of abuse in the past. Government reports say around 40 percent of women prisoners have a history of physical or sexual abuse, but other researchers report much higher numbers.

The blog features the story of Lydia, a 56-year-old Florida woman who was sentenced to life without parole in prison for the murder of her abusive ex-husband. The then-governor granted her clemency in 1998, but he died just a few days later and his successor didn’t honour the executive order that would have set Lydia free. She is still behind bars.

And there are other stories, such as those of women who are incarcerated for non-violent offences, such as drug-related offences, often without adequate drug treatment programmes or health care.

“If you were molested at age five, you learn to take care of yourself by getting high,” Archibald told IPS. “That starts the cycle. And prison is not really the way to end that cycle for most people.”

For women who have experienced abuse, even pat-downs can trigger flashbacks, Archibald said. She said the often punishing atmosphere of prison life resembles, in many ways, the abuse that many women in prison experienced in their own lives before being incarcerated.

“Part of being abused is learning helplessness, that you don’t have right to speak out about it, and that this is what you deserve – that is reinforced in what they experience every day” in prison, Archibald told IPS. “When they talk about signs of an abusive relationship – ignoring what you think, blaming you for your own problems – it is very similar to what you experience in prison.”

Robin Levi is co-editor of the book “Inside This Place, Not of It”, a collection of oral narratives from 13 women in prison throughout the country. She works with Justice Now, a legal advocacy group for women prisoners based in California.

Levi said there have been some improvements in the area of sexual abuse against women in prisons, as well as efforts to decrease forced sexual attacks, but evidence shows abuse is still widespread.

“In our research, there are still some states where it was basically a free-for-all in terms of the guards being able to abuse the women,” Levi told IPS. She said Virginia and Colorado were currently facing lawsuits over incidents of sexual assaults on women in prison.

At the heart of the problem, Levi said, is the over-incarceration of women.

The U.N. report of the rapporteur on violence against women notes a 400-percent increase in the number of women in prison since the 1980s, mostly non-violent, first-time offenders, “following the introduction of mandatory sentencing in federal drug laws”.

“All of these things are making our prison population to skyrocket and putting many, many people who are already broken and have already been abused in the line for more violence,” Levi told IPS.

She said that the women’s narratives featured in her book highlight the full life stories of women who could offer so much more to society.

“I hope that people would ask what is being served by keeping them in prison,” Levi said. “Are we safer because these women are in prison? Is our community safer? Is our society better?”