ST GEORGE'S, Grenada, Jan 23 2012 (IPS) - As China sees its influence continue to grow in this part of the world, a delegation from the United Kingdom arrived in Grenada last weekend with a proverbial carrot for its former colonies, vowing to create new opportunities for trade, investment and innovation “in our respective economies”. 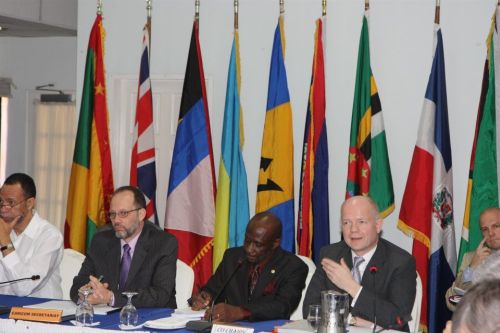 With plans to invest 116.5 million dollars over a four-year period, a considerable increase from previous aid budgets, London is sending a strong signal of its intention to be part of the future socioeconomic development of the region.

“We are one of the biggest trade investment partners in your region,” said Foreign Secretary William Hague. “South of the U.S., only Brazil is a more important market for our exports. We are a leading voice in the European Union in favour of free trade and against protectionism, putting us in a position to champion things that matter to the Caribbean.

“Our membership of the G8 and G20 gives us a leading role in discussions about global economic governance – and we know how important it is that the voices of smaller nations are heard in these debates and across international multilateral organisations,” he said.

Asked about London’s role in a new Caribbean environment where countries, including China, were seeking to gain some form of influence, Hague noted said “this is a network world, it is not a world of blocs anymore where you are in one camp or another camp. You can actually have strong and effective trading relationships with many countries in the world.”

In September, China signed cooperation and loan agreements for projects worth millions of dollars with Barbados, The Bahamas, Antigua and Barbuda, Trinidad and Tobago and Guyana.

At the UK-Caribbean Forum, St. Kitts and Nevis Foreign Minister Sam Condor, who chairs the Caribbean Community Council for Foreign and Community Relations, said he was heartened by the stated determination of Hague “to bring about a new beginning, as it were”.

“The ongoing economic crisis, the epidemic of interpersonal violence, the prolonged tightening of credit markets, the less predictable relations between and among nations, the degradation of the environment (and) climate change” are some of the critical issues involved, he said, adding that “the Caribbean region has taken a beating in all areas resulting in a formidable toll on our very survival”.

One bone of contention that was not resolved in the talks is the Air Passenger Duty (APD) that Caribbean officials complain hampers the tourism sector.

Late last year, London announced that the APD rates to Caribbean destinations will continue to be considerably higher than those to some competitor destinations. The tax on economy long-haul flights of more than 6,000 miles will rise from 132 dollars to 143 dollars per person. The new measure goes into effect in April this year.

Condor, speaking at a news conference at the end of the talks, said that “we always have to be hopeful” as the region continues to look for “some adjustments” since “we do not believe it (APD) is cast in stone.

“We are aware that the British government has their own fiscal responsibility to their own country (but) we believe that this is a new partnership, a new beginning which we hope to see a different attitude in how they relate to the Caribbean.”

But British Foreign and Commonwealth Office Minister for the Caribbean Jeremy Browne made it clear that London would not be pressured into re-examining the matter now.

“We have a very difficult budget situation in Britain…and countries across Europe, many have even harder budget situations than us, we are running a very big deficit and there are a number of unpopular taxes in Britain…and we are not in a position where we have the flexibilities to remove sources of revenue,” he said.

The “Final Action Plan” made reference to the new strategic partnership between the Caribbean and the United Kingdom “to promote prosperity and build economic resilience”. There was also an agreement to explore other avenues, such as the Economic Partnership Agreement (EPA) that was signed between Europe and the Caribbean Forum (CARIFORUM) countries in 2008 to improve access for Caribbean exports of goods and services to Britain.

Britain also agreed to assist the Caribbean improve food security and the “resilience of their food and agricultural sectors, through measures aimed at enhancing the efficiency of production and distribution systems and the economic security of producers”. The meeting agreed to the develop this year an “effective coordination mechanism to help take forward our partnership in the fight against drugs and international crime, including through the establishment of a UK-Caribbean Expertise Exchange Mechanism to promote best practices on security issues across the region”.

There was also agreement to establish with the “full collaboration of the United States, a regional network of land-based law enforcement units trained and equipped to a common standard.

“These units would provide a fully interoperable regional resource to conduct land based surveillance and interdiction operations.”

The ministers also agreed to remain “engaged in negotiations to conclude an Arms Trade Treaty in 2012 and for the successful outcome of the Review Conference of the UN Plan of Action to prevent, combat and eradicate the illicit trade in small arms and light weapons.”

On the issue of climate change, there was agreement to collaborate closely on many issues, including working together “with urgency and vigour” to close the “ambition gap between current mitigation commitments and those necessary to keep long term temperature increases well below two degrees centigrade or 1.5 degrees centigrade above pre-industrial levels”.

A was made commitment to secure agreement by 2015 based on the Durban Platform for enhanced action on a comprehensive legally binding global framework, incorporating commitments commensurate with a two or 1.5 degree threshold.

The meeting also agreed to identify sources and ensure adequate mobilisation of long term climate finance and to meet the agreed goal of 100 billion dollars of additional financing annually by 2020.