KANO, Nigeria, Jan 11 2012 (IPS) - As a nationwide strike and protests against the lifting of the fuel subsidy paralysed Nigeria for the third day in a row Wednesday, analysts say the billions of dollars a year lost to corruption in the oil industry could have been used to leave the subsidy in place. 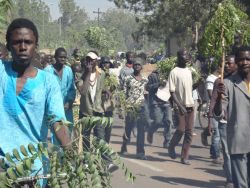 Demonstrators flock to the streets of Kano to protest the fuel subsidy removal. Credit: Mustapha Muhammad/IPS

“We know that because of the corruption and irrelevant people placed in certain key positions in the sector, a lot of crude oil is being lost,” Garba Ibrahim Sheka, a senior lecturer in economics at Bayero University in the northern city of Kano, told IPS.

Nigeria has some of the lowest fuel prices in the world. But a majority of the population lives on less than two dollar a day, and the removal of the fuel subsidy since Jan. 1 has hit the poor hard by more than doubling petrol prices and transport fares and driving up the prices of foodstuffs and other commodities that are transported from one region to another.

“This federal government policy comes at a time when the unemployment rate is high: over 40 million people are unemployed” in this country of 158 million, Sheka said.

“The social impact is that Nigerians are getting poorer, and the poorer they are the more insecurity we have. We expect socially that there will be more poverty, more hunger, and more social problems like armed robbery and this problem of Boko Haram,” he added, referring to a militant Islamist sect that has carried out attacks and bombings over the last year that have claimed a number of lives.

The decision by the administration of President Goodluck Jonathan to lift the fuel subsidy drove the price of fuel up from 65 naira (35 cents of a dollar) a litre to 150 naira (93 cents) basically overnight.

The government of Africa’s top oil producer said the 7.5 billion dollars spent every year on fuel subsidies could be used to provide desperately needed infrastructure.

Central Bank Governor Lamido Sanusi told reporters in Kano that “The monies will be used in provision of social amenities and infrastructural development that will benefit Nigerians more and save the country from economic rift.”

The authorities in Africa’s most populous nation also say subsidised fuel is smuggled into neighbouring countries where petrol prices are higher, thus depriving Nigerians of the benefits from the subsidy.

“The subsidy, which runs over one trillion naira, has been shared with neighbouring countries like Chad, Niger and Cameroon,” Abdullahi Umar Ganduje, deputy governor of Kano state, told IPS.

The lower house of parliament held an emergency session on Sunday Jan. 8, urging the president to suspend the decision to slash the fuel subsidy, and calling on the trade unions to cancel plans for an indefinite strike.

But the government stood by its decision and labour unions, students, academics and activists went ahead with the strike and mass protests on Monday.

Up to 10 people were reported killed and many more were injured in the protests as police used live ammunition in some states to disperse demonstrators. “We rushed some victims with gunshots wounds to Nassarawa Hospital. A total of 30 protesters were injured,” Musa Abdullahi, the head of the Red Cross in Kano, told IPS.

A local human rights group, the Civil Rights Congress, condemned the use of excessive force by the police.

Millions of protesters have been taking part in the nationwide demonstrations, marching down the main avenues of the cities chanting anti-government slogans. Most other streets are deserted and shops are closed. In the northern state of Kaduna, two former governors are leading the protest.

“We are not afraid of police brutality and we shall continue with the struggle to the death,” one of the protesters, Kabiru Musa, told IPS at a demonstration in Kano.

“The impact is going to be devastating; if all the sectors are shut down the government is going to lose billions of naira,” said Sheka, at Bayero University.

“The longer the strike drags on, the more negative the impact on the economy and the social impact will be,” said the academic, adding that the government should keep in mind the recent experiences of governments in the Middle East and should be “wise enough not to allow this to happen.”

Official government figures put crude oil drilling at 2.09 million barrels per day since the Niger delta amnesty deal for militants, aimed at reducing unrest in that oil-rich region, went into effect in 2009.

But analysts accuse Nigerians working in the oil industry of conniving with multinational oil companies, and depriving the country of revenue.

“We believe that if ‘leakages’ can be mended definitely, a lot of money can be realised from the area,” Sheka said.

Nigeria imports refined petroleum products to meet domestic demand, because the country’s four refineries are not functioning at full capacity.

Curfews have been announced in the northern state of Kano and other parts of the country, and a state of emergency has been declared in some parts of four states: Borno, Yobe, Plateau and Niger.

But the measures have failed to calm protests and quell attacks. Bombs exploded in Borno and Yobe, suspected to be the work of the Islamist militant group Boko Haram. And no fewer than 25 people were reported killed in attacks on churches in Gombe and Adamawa, in the troubled northeast.

An attack on a mosque in Edo State in southern Nigeria was believed to be carried out in reprisal for the church bombings.