No One Wants Mexico City’s Garbage

MEXICO CITY, Jan 6 2012 (IPS) - The closure of Mexico’s biggest garbage dump has highlighted the absence of a comprehensive policy for urban waste collection, disposal and processing, a failure that has serious consequences for health and the environment. 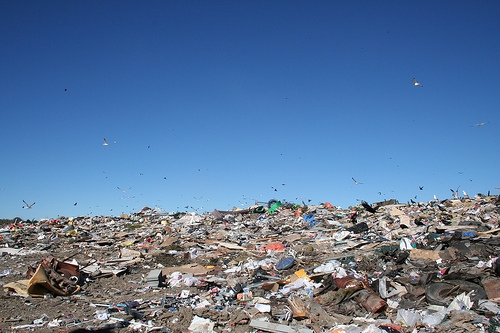 The leftwing government of the Mexican capital decided in December to close Bordo Poniente, the biggest refuse dump, located in the east of the city, without coming up with an alternative solution. Now municipalities adjacent to Mexico City are refusing to accept its waste.

“We have insisted on the ‘metropolitanisation’ of public services, like waste collection, water, transport and energy which are in crisis situation now. A fair amount of Mexico City’s waste comes from people who live in the metropolitan area – people who come in to the city to work, and the informal traders,” Iván Restrepo, head of the Ecology and Development Centre, told IPS.

Restrepo and his team have monitored the garbage situation in this Latin American country since the 1980s.

The Bordo Poniente landfill site has been in use since 1985. It covers an area of 600 hectares and was receiving 12,600 tonnes of waste a day, 7,000 of them from municipalities in the state of Mexico, adjacent to the Federal District (DF) or city proper, according to the capital city’s secretariat of works and services.

The closure of Bordo Poniente has sparked a conflict between the national, city and state governments: the national government has been exerting pressure since 2008 to close the site, but the Mexico City government kept it going until 2011, while the state of Mexico government is resisting the location of garbage dumps in its territory.

Only as the new year began did the federal and city authorities reach agreement about the definitive closure programme, which provides for the Mexico City government to put the exploitation of methane, produced by waste decomposition at the site, out to international tender.

The crisis became acute as “more urban areas became densely populated, so that waste was further concentrated,” said Ramón Ojeda, secretary-general of the International Court of Environmental Arbitration and Conciliation (ICEAC). “Consumerism has increased sharply, in tandem with the absence of a culture of non-generation, classification and recycling of waste,” he told IPS.

In 2008 ICEAC, based in the Spanish city of San Sebastián, recommended the closure of Bordo Poniente, restoration to compensate for environmental damage, and the investment of 71 million dollars in cleaning up the site.

ICEAC was created in Mexico in 1994 with the aim of resolving environmental conflicts by negotiation between states, individuals and legally recognised bodies such as companies and NGOs.

Mexico’s ministry of the environment and natural resources estimates 40 million tonnes of garbage are generated annually in the country, of which only 15 percent is recycled.

“We are tossing valuable materials into the trash, and there is the whole problem of the absence of re-use and recycling. The goal is to recycle at least 60 percent of our waste. We must establish sanitary landfills that meet health and safety regulations. You can’t just improvise a landfill site,” said Restrepo.

“We are going to have a problem with garbage for a long time. If we take action now, it need not get any worse, but we need a long-term strategy,” he said.

The Ecology and Development Centre identified at least 30 failed garbage dump projects since the 1980s. The failures were due to a mix of several factors, such as corruption and the lack of political will.

The metropolitan area of Mexico City, home to some 24 million people, has only two garbage dumps in the state of Mexico, and they are in danger of overflowing now that Bordo Poniente is closed.

The landfill has ceased to receive 3,600 tonnes of garbage a day, while 3,000 tonnes are going to make compost, 800 tonnes of plastic bottles, cardboard and metals are being recycled, and 600 tonnes are used to produce alternative fuels, according to the ministry of works and services.

That still leaves 4,600 tonnes a day without a designated purpose.

In 2009, the Mexican federal government suspended plans for building Centros Integrales de Reciclado y Energía (CIRE – Integral Waste-to-Energy Plants) because of heated opposition from local residents in the locations chosen. The CIREs are intended to make use of organic waste to produce compost, recycle inorganic materials and generate electricity.

The 2003 Federal Waste Law regulates waste management and procedures for opening and closing waste dumps, but does not clarify who owns the garbage – the source producer, the collector or the waste dump manager? – until such time as it reaches the hands of the municipal or federal authorities, which complicates the use of garbage for profit.

“We are facing environmental and regulatory chaos. Powers vested in the authorities should be turned over to ordinary citizens, without any privatisation of waste management services, so that we can have an organisation with broad representation, including experts, universities, citizens and private companies,” said Ojeda, whose term as head of ICEAC is due to end in 2013.