WASHINGTON, Jan 11 2012 (IPS) - Hundreds of protesters, dozens outfitted in orange jumpsuits and black hoods, took to the streets outside the White House on Wednesday to demonstrate against torture and indefinite detention on the 10th anniversary of the opening of the U.S. prison facility at Guantánamo Bay, Cuba. 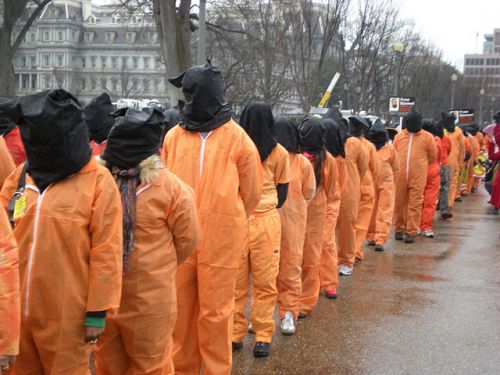 Outside the White House, protesters withstood rain and cold to decry what they labeled a bipartisan assault on human rights. Credit: Charles Davis

Since opening in the wake of the Sep. 11, 2001, terrorist attacks, the detention facility at Guantánamo has been mired in controversy. Though said by the likes of former Vice President Dick Cheney to house the “worst of the worst”, many of those imprisoned at the facility without charge or trial for alleged ties to terrorism – 775 at its peak – have been found to be completely innocent and subsequently released.

Yet despite pledging to shutter the facility, President Barack Obama has instead institutionalised the practice of indefinite detention, his administration asserting the right to detain at least 48 of the remaining 171 men at Guantánamo indefinitely without so much as a military tribunal, declaring them too dangerous to be released even as it concedes it lacks sufficient evidence to try them. Though more than half of those housed at the prison have been approved for transfer or release, the last two to actually leave did so in body bags.

And at Bagram Air Base in Afghanistan, around 2,600 men are currently imprisoned without charge, with human rights groups reporting they are subjected to Guantánamo-like conditions such as routine sensory and sleep deprivation and other techniques condemned as tantamount to torture.

Rather than push back against this expansion of indefinite detention, lawmakers in Congress have instead codified it, passing a bill, the National Defense Authorization Act (NDAA), which allows the military to imprison without charge for the duration of the war on terror anyone accused of a terrorism-related offence, including U.S. citizens.

Nonetheless, the Obama administration has maintained that Congress is to blame for the fact the Guantánamo detention facility remains open three years after the president issued an executive order declaring his intention to close it. In late 2010, congressional Republicans and conservative Democrats successfully passed a measure blocking the White House from spending any funds transferring prisoners at Guantánamo to facilities in the United States.

But Ramzi Kassem, a professor of law at the City University of New York who represents seven men detained at Guantánamo, told IPS there is plenty of blame to go around.

“I think Congress shoulders a share of the responsibility, but it’s also the president’s fault,” Kassem said. “There are many things he could have done to close Guantánamo, so to the extent it’s still open it’s very much a self-inflicted wound on the president’s part.”

Guantánamo is also only a place, Kassem added. More troubling are the legal principles it represents – principles that have been embraced wholeheartedly by the president.

“His legal position as to Bagram is indistinguishable from the Bush administration’s position as Guantanamo,” he said, “namely that there is no (legal) jurisdiction – Obama administration lawyers are going to court these days to say that.”

Human rights groups agree. “The men indefinitely detained at Guantánamo have been abandoned by all three branches of government,” the Center for Constitutional Rights declared in a Jan. 11 statement, “but the primary responsibility for the prison remaining open lies with President Obama.”

Rather than deliver its promise of a “new era of accountability and respect for the rule of law”, the group noted the Obama administration has also “repeatedly acted to block virtually any accountability for those who have planned, authorized, and committed torture at Guantánamo and beyond.”

Amnesty International also issued a statement decrying the prison’s “toxic legacy”, while Human Rights Watch sent a letter to President Obama criticising his embrace of indefinite detention and urging him to reaffirm his commitment to closing Guantánamo.

A group of prominent attorneys and retired military officials – including Admiral John D. Huston and Lawrence Wilkerson, the former chief of staff to Secretary of State Colin Powell – likewise called on Congress and the Obama administration to close a facility they said undermines the rule of law and acts as a recruiting tool for terrorists.

Outside the White House, meanwhile, protesters withstood rain and cold to decry what they labeled a bipartisan assault on human rights, with over 60 protesters outfitted in Guantánamo’s trademark orange jumpsuits and black hoods encircling the White House to demand the facility be shuttered.

More than 50 protesters also took part in a 10-day hunger strike and deployed a make-shift prison cell in front of the White House to highlight their opposition to what activist Beth Brockman termed the Obama administration-supported, Congress-approved “architecture of torture, abuse and indefinite detention”.

Among those joining the protest was Morris Davis, the former chief military prosecutor at Guantánamo from September 2005 until 2007, who resigned after objecting to the use of evidence gained through torture. He said the prison’s continued operation was an indictment of the U.S. government as a whole.

“Congress has failed us, the president has failed us,” Davis told the crowd. “It’s up to the people to demand our government do the right thing.”