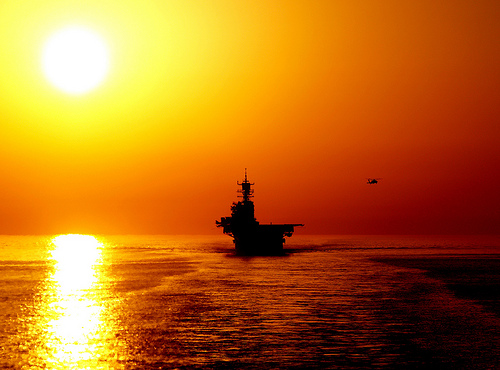 If that aphorism didn’t apply in the run-up to the U.S. invasion of Iraq 10 years ago, it appears to be the case now for key sectors of the U.S. foreign-policy elite – notably, liberal hawks who supported the Iraq war – with regard to the sharp rise in tensions between Iran and both the U.S. and Israel earlier this month.

Amid a crescendo of threats by senior Israeli officials to attack Iran’s nuclear facilities, the murder, presumably by Mossad, of a fifth Iranian nuclear scientist in the past several years, and a sharp escalation of Western economic sanctions designed to “cripple” Iran’s economy, Tehran’s threat to close the Strait of Hormuz brought the until-then hypothetical possibility of war – whether by design, provocation or accident – sharply into view.

The hawkish declarations by Republican presidential candidates eager to prove their love for Israel to Christian fundamentalists and Jewish voters and donors didn’t help, nor did a renewed and intensified drumbeat for “regime change” by some of the same neo- conservatives from institutions like the American Enterprise Institute (AEI) and the Foundation for the Defence of Democracies (FDD) that led the drive to war in Iraq.

Adding to the sense that war was suddenly a very real possibility, these events more or less coincided with the publication by the influential Foreign Affairs journal of an article entitled “Time to Attack Iran: Why a Strike is the Least Bad Option”. It advocated a limited and carefully calibrated U.S. aerial attack on Iran’s air defences and nuclear sites, and was authored by an academic, Matthew Kroenig, who had just completed a one-year stint as a strategic analyst in the office of the secretary of defence.

The confluence of all these developments provoked a number of influential members of the foreign policy establishment – including several prominent liberal interventionists who had supported the Iraq war – to warn against any further escalation either by the U.S. or Israel.

“We’re doing this terrible thing all over again,” wrote Leslie Gelb, the president emeritus of the Council on Foreign Relations, the think tank that publishes Foreign Affairs, in the Daily Beast, in an appeal for Senate hearings on the implications of war with Iran.

“As before, we’re letting a bunch of ignorant, sloppy-thinking politicians and politicized foreign-policy experts draw ‘red line’ ultimatums. As before, we’re letting them quick-march us off to war,” warned Gelb, a repentant Iraq-war hawk, about the chorus of neo- conservatives and other hawks with whom he had previously been aligned.

On the pages of The New Republic, Kenneth Pollack, a former top CIA analyst at the Brookings Institution whose 2002 book, “The Threatening Storm: The Case for Invading Iraq”, was cited frequently by liberal hawks before the war, argued not only against any further escalation, but also suggested that the sanctions track on which the Barack Obama administration and the European Union have increasingly relied was proving counterproductive.

“The problem is that these sanctions (against the Central Bank of Iran) are potentially so damaging that they could backfire,” he wrote, citing their possible negative impact on the West’s own struggling economies and the difficulty of sustaining them diplomatically over time if they resulted in the kind of “humanitarian catastrophe” inflicted by the sanctions regime against Iraq from 1992 until the invasion.

Moreover, he went on, “…the more we turn up the heat on Iran, the more Iran will fight back, and the way they like to fight back could easily lead to unintended escalation. Doubtless such a war would leave Iran far, far worse off than it would leave us. But it would be painful for us too, and it might last far longer than anyone wants…”

Meanwhile, another influential liberal hawk, Princeton Prof. Anne- Marie Slaughter, argued in project-syndicate.org that the West and Iran were playing a “dangerous game” of “chicken” and that the West’s current course “leaves Iran’s government no alternative between publicly backing down, which it will not do, and escalating its provocations.”

“The more publicly the West threatens Iran, the more easily Iranian leaders can portray America as the Great Satan to parts of the Iranian population that have recently been inclined to see the U.S. as their friend,” wrote Slaughter, who stepped down as director of the policy planning office under Secretary of State Hillary Clinton.

“It is time for cooler heads to prevail with a strategy that helps Iran step back,” she added, suggesting that the aborted Turkish- Brazilian 2010 effort at mediation between the P5+1 and Iran be revived.

Yet another Iraq hawk, New York Times columnist Bill Keller, attacked the Foreign Affairs article, assuring his readers that Kroenig’s former colleagues at the Pentagon “were pretty appalled by his article, which combines the alarmist worst case of the Iranian nuclear threat with the rosiest best case of America’s ability to make things better.”

Contrary to Kroenig’s predictions, Keller wrote, “…an attack on Iran is almost certain to unify the Iranian people around the mullahs and provoke the supreme leader to redouble Iran’s nuclear pursuits, only deeper underground, and without international inspectors around. Over at the Pentagon, you sometimes hear it put this way: Bombing Iran is the best way to guarantee exactly what we are trying to prevent.”

Indeed, in a reply to Kroenig entitled “Not Time to Attack Iran“, Colin Kahl, who had also just left the Pentagon at the end of December after two years as the head of Middle East policy, argued that Kroenig’s “picture of a clean, calibrated conflict is a mirage. Any war with Iran would be a messy and extraordinarily violent affair, with significant casualties and consequences.”

Among other objections, Kahl, a senior fellow at the hawkish Center for a New American Security (CNAS), predicted that a pre-emptive strike of the kind promoted by Kroenig could well spark a regional war, solidify popular support for the regime in Tehran, and transform “the Arab Spring’s populist antiregime narrative into a decidedly anti-American one.”

Indeed, much of Kahl’s analysis was subsequently backed up by Gen. Michael Hayden (ret.), who, as the head of the Central Intelligence Agency during George W. Bush’s second term, could hardly be called a liberal.

According to the “Cable” blog on foreign policy.com, Hayden, who served as the head of the Pentagon’s National Security Agency from 1999 to 2005, told a small group convened at the Center for National Interest last week that top Bush national security officials had concluded that a military strike on Iran’s nuclear facilities – whether by Israel or the U.S. – would be counter-productive.

The Israelis, he reportedly said, “aren’t going to (attack Iran)… They can’t do it, it’s beyond their capacity. They only have the ability to make this (problem of Iran’s nuclear programme) worse.”

And while the U.S. has the ability to mount a campaign, it could only serve as a short-term fix. “What’s move two, three, four or five down the board? I don’t think anyone is talking about occupying anything.”