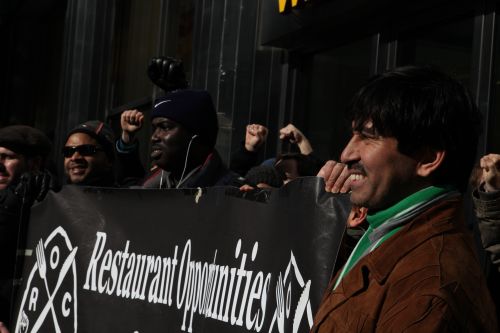 Darden Restaurants employs 179,000 workers in 1,900 locations in the U.S. and Canada. It owns, among other chains, Olive Garden, Red Lobster and Longhorn Steaks. The focal chain in the suit is Capital Grille, the finest and most expensive of Darden’s restaurants.

“Workers from the Capital Grille have decided to raise their collective voice and tell Darden that they deserve dignity on the job,” John Cronan Jr., lead organiser for the Restaurant Opportunities Center of New York, told IPS.

“Darden has the ability and resources to provide, good, just, and fair working conditions and jobs for thousands of workers. We are saying that it should do so,” Cronan said.

“The top one percent and Wall Street are doing better than ever,” Stephanie Mueller, a spokesperson for ROC, added.

“Darden made profits last year of more than a half billion dollars for their big stockholders like J.P. Morgan and State Street Bank,” she told IPS. “The money is there, the problem is that it is not going to those who do the work and cook and serve the food every day.”

The Restaurant Opportunities Center (ROC) served Darden with a formal complaint at the main Capital Grille location in midtown New York City on Monday. Workers, organisers and supporters crowded into the high- end restaurant in a show of support, while Omar Camara, a line cook at Capital Grille, handed the letter to his manager.

“I was pretty nervous at first, and thought they might just fire me,” Camara said after the letter drop, “But all of these people here with me made me feel strong, and I know this is an important thing.”

ROC accuses Darden of racism and various violations of state and federal labour practices. According to ROC and workers at Capital Grille locations in New York, Chicago and Washington D.C., high-paying “front-of-the-house” jobs such as waiters, bartenders and hosts are reserved for white employees, while more rigorous and lower-paying “back-of-the-house” jobs are given to black and Latino workers, who are rarely seen by customers.

The lawsuit also details allegations of wage-theft, including among other charges, taking tips from employees, requiring front-of-the- house workers to contribute portions of their tips to pay the salaries of back-of-the-house workers, and at times requiring employees to work for less than minimum wage or even “off the clock” and without pay altogether.

“Workers from The Capital Grille came to ROC with issues of racial discrimination and wage and hour violations,” Cronan told IPS.

“It is important we support them 100 percent,” he explained, “because ROC is the only national restaurant workers organisation that is actively organising workers in the industry.”

“Restaurant workers deserve a living wage and to be treated with dignity,” said Daisy Chung, co-director of ROC-NY, in a statement. According to ROC, one in 12 American workers is employed at a restaurant, and 75 percent of Americans eat out at restaurants at least once a week.

ROC announced their national campaign to better conditions at Darden Restaurants on Tuesday at the release of their annual Diners’ Guide, a booklet ROC researches and produces detailing the restaurants with the best labour practices. Restaurants are rated in several categories, including paying over minimum wage, paid sick days off, medical coverage, and “high road” practices, which involve training and promoting from within.

The workers organisation also cooperates with university researchers to expand the understanding of the nature of restaurant work and its impact on communities and the economy.

ROC was founded in New York City after Sep. 11, 2001 to provide support to restaurant workers affected by the attack on the World Trade Center. It has since grown into a national restaurant workers organisation fighting for labour rights, anti-discrimination and fair employment practices in the food service industry, with almost 10,000 members in nine cities across the U.S.