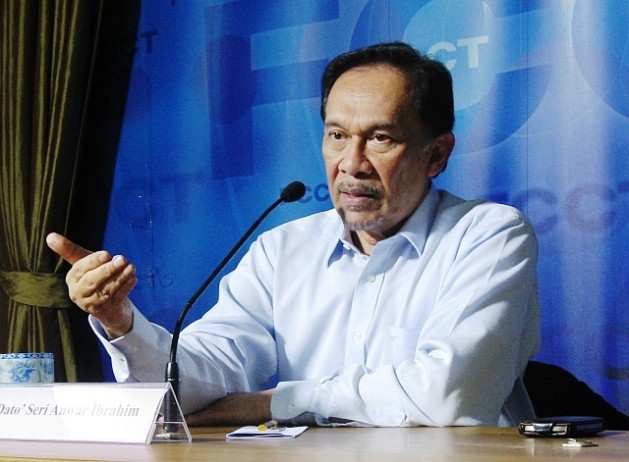 BANGKOK, Feb 24 2012 (IPS) - Malaysia’s charismatic opposition leader Anwar Ibrahim is tapping the spirit of the Arab Spring to end the 55-year unbroken rule of the United Malay National Organsiation (UMNO) and its allies in the Southeast Asian nation.

“Malaysia cannot be isolated from what is happening throughout the world, particularly the Muslim world,” said the 64-year-old head of the Parti Kedilan Rakyat (PKR), or People’s Justice Party. “For us in Malaysia these are very reassuring signs: this trend towards democracy, freedom and more accountability in the Arab world.”

His ongoing campaign for more freedom will be tested in Malaysia’s provincial and national legislatures, where the PKR made history in the 2008 polls, winning five state governments out of 13, and 82 seats out of 222 in the national parliament.

But Anwar admitted during an interview in the Thai capital that he faces a formidable challenge, given how UMNO where he was once a rising star has persecuted him since he was fired as the country’s deputy prime minister in 1998 on charges of corruption and sodomy.

He was freed after six years in jail after a court overturned the charges. But fresh allegations were made in 2008 that he had sodomised a former male aide, another case that was overturned by a court in January this year.

Q: Has your January court victory boosted your political fortunes?

A: It does not make a difference among my supporters because they know the case was based on trumped up charges. But it does make a difference for those who are non-committal or ruling party supporters. They received a daily barrage of news from the media during the case that Anwar is guilty and the judiciary is independent.

Q: Would you prefer a general election early this year? Or when the current parliament’s term runs out in March 2013?

A: It is very likely the elections will be held this year. The massive campaign now by the government suggests that they may go for an election in late March or any time in June. So, we have to be prepared because elections in Malaysia are a mockery of the democratic system. The media is controlled and the campaign period is only seven to eight days – the shortest in the world.

Q: You have emerged as a symbol of a new Malaysia after decades of corrupt and authoritarian rule by the governing coalition. Do voters have a reason for optimism?

A: Although I am not that young (laughs) …, our policies are clear for Malaysia to mature as a democracy. What the Arab Spring people are talking about and the Occupy Wall Street movement is talking about in terms of justice and being opposed to unbridled capitalism that caters only to the very rich and the very few are what we have been articulating.

Q: Does that mean a break from the state-driven capitalism of UMNO?

A: Our economic agenda seeks to offer an alternative to this policy, which I consider obsolete. It only benefitted the rich families, members of the ruling clique and their cronies through contracts and shares. They became billionaires by using the Malay privileges. And they continue to defend this system tooth and nail because of their personal interest.

Q: UMNO’s other defining feature has been its race-based politics. But you head a coalition drawing on many ethnic groups. Is Malaysia ready for your politics seeking to transcend these deep divisions, particularly the Malay majority?

A: It is challenging. I don’t deny the fact that it will be difficult. I have been accused by the governing party of trying to sell the country to the Chinese, or under us the country will be Christianised, and if I attend Hindu functions it has also become an issue. So, they are using these racist lines to attack me.

To be discriminated because of race is something unthinkable and unacceptable in this day and age. I believe the majority of Malaysians can be convinced to accept this view.

Q: What about sodomy?

A: I have said that the law on sodomy is a crime. That does not mean I am pro-gay marriage. As a Muslim I and even the majority of non-Muslims in Malaysia believe in the sanctity of marriage.

Q: You are not the only opposition figure in Southeast Asia who has been harassed by their respective governments. Burma has Aung San Suu Kyi, Cambodia has Sam Rainsy and Singapore has Chee Soon Juan. Why do they fear a vibrant opposition?

A: We have been late in the process of understanding that our countries must mature as a democracy, to respect democratic institutions, respect the right to dissent and the right to freedom. The Arab Spring has been particularly useful for us in the Muslim world in this regard. It has had an impact about the meaning of democracy.

A: The notion of ‘Asian Values’ is obsolete. It was never relevant in the first place. It was not even Asian values as we talk about Islamic values. It was a perverted excuse to benefit those in power.

Q: But you were part of the system and benefited from it before you fell out with former premier Mahathir?

A: I cannot absolve myself. But in my speeches I did talk about the condescending view leaders had towards their citizens. Such views have no place in politics today.