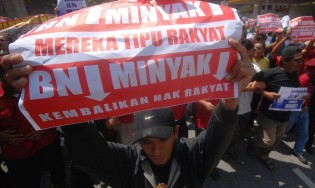 By Marwaan Macan-Markar
Malaysia’s charismatic opposition leader Anwar Ibrahim is tapping the spirit of the Arab Spring to end the 55-year unbroken rule of the United Malay National Organsiation (UMNO) and its allies in the Southeast Asian nation.
ADVERTISEMENT ADVERTISEMENT