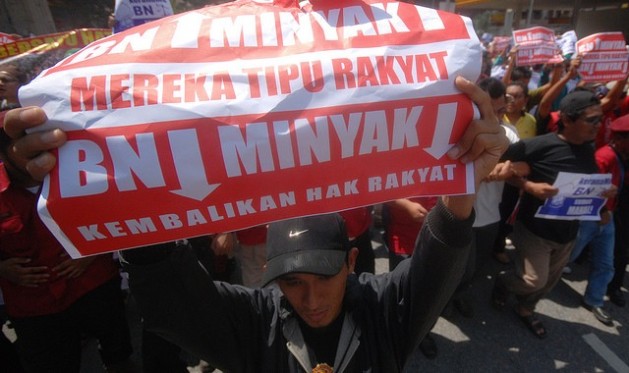 KUALA LUMPUR, Jun 6 2013 (IPS) - They had voted for “ubah” or change. What the youth of Malaysia got instead seems to be more of the same.

“I am deeply disappointed,” said Alex Lee, a 24-year-old student at the Kuala Lumpur campus of Universiti Tunku Abdul Rahman (UTAR), a private institution run by the Malaysian Chinese Association, one of the main parties in the current ruling coalition.

“All my friends, relatives and everyone I know said we could vote and change the government - but even though all of us voted for Pakatan Rakyat, we could not." -- Samantha Yow
“We thought people’s power would bring about change. Instead we see the same old government taking office and the same old policies are in place,” Lee told IPS during his shift at a warong (eatery) in the upscale Bangsar suburb of Kuala Lumpur, where he works part time.

Lee is giving voice to the widespread resentment among Malaysia’s urban youth, who, comprising 60 percent of the country’s 13.5 million voters, had thought their numbers would be large enough to bring about the change they so desperately sought at the recent elections.

They had pinned their hopes on the Pakatan Rakyat, a coalition of three disparate parties, as the vehicle of that change. As it happened, though, Barisan Nasional (BN), a coalition of 13 parties that has held the reins for 56 long years, returned to power yet again.

BN went on to form the government on the basis of securing 133 seats in the 222-seat parliament, its poorest showing to date. Despite bagging 52 percent of the larger national vote, PR had no choice but to occupy the opposition benches, given the country’s first-past-the-post electoral system.

In the May 5 election Barisan Nasional won 133 rural seats but lost the popular vote.

Alleging a “theft” of this election, PR leader Anwar Ibrahim has been staging rallies across the country, which dejected youth are attending in droves, numbering well over 50,000 at any given time.

“I had rushed to register as a first-time voter along with my friends in college, and we all supported the Pakatan,” said Lee, who just last week was in the nearby town of Petaling Jaya to attend one such rally that drew an estimated 70,000 people, most them of youth.

“We thought we would have a new beginning. But it’s the same old problems again: high university fees, high cost of living.”

Transport, rent and other living expenses account for most of the average monthly salary of roughly 970 dollars. Young people have little to look forward to after they leave school besides working hard just to make ends meet.

“This country is for a few rich people,” Margaret Lam, who works with Lee at the warong, told IPS, referring to corrupt practices like granting government cronies Approved Permits to import luxury cars at reduced tax rates, while placing heavy duties on imported vehicles under the guise of “protecting” the local car manufacturer, Proton: the first indigenous-owned and operated automobile enterprise in the country that has long enjoyed government support.

In fact, the Pakatan Rakyat had announced plans to revamp the National Automotive Policy (NAP) if it came to power, by slashing duties on what many people here see as cheaper, better quality cars from abroad. The reforms would have forced Proton to get competitive, rather than rely on the government’s protectionist policies that have buoyed it up for three decades at a huge cost to ordinary people, experts say.

This promise by PR was yet another reason for youth to throw their lot in with the opposition, since many young people were already fed up with the government’s preferential treatment of natives (called bumiputras, or ‘sons of the soil’).

Alan Rajasooriya, who spoke with IPS at a recent rally in Seremban, a city about 60 km south of the capital, said he wants more than anything to see an end to policies that discriminate against descendants of Indians and Chinese.

“There should not be any preferential treatment to natives over non-natives,” he said, lashing out at policies that favour bumiputras by giving them priority in major business deals and government contracts.

According to him, this view finds echo among thousands of other youths who have been taking to the streets. They are also demanding an end to corruption and cronyism.

Rajasooriya and scores of others like him also firmly believe Ibrahim’s accusation that the country’s election commission allowed Bangladeshis, who come to the country as guest workers, to vote, in order to beef up the government’s numbers.

This is something that the election commission denies. However, as a gesture of reconciliation, the new government, under the prime ministership of Najib Razak, has offered to place the body under a parliamentary select committee.

Neither Ibrahim nor the youth are appeased. “All my friends, relatives and everyone I know said we can vote and change the government,” Samantha Yow, another youth protester, told IPS. “But even though all of us voted for Pakatan Rakyat, we could not.”

Now she feels she has no choice but to attend rallies, where she and other frustrated youth “share their aspirations and let off steam.”

The wave of popular discontent has also highlighted the rural-urban divide, with protesters articulating the desires of primarily urban youth.

Ibrahim Suffian, director of programmes at the Selangor-based Merdeka Centre for Opinion Research, attributes this partly to the level of government-controlled media in the Malaysian countryside, where about 30 percent of the population resides and where most people rely on national newspapers and television stations for their information.

Internet penetration of the country is just over 60 percent, and most rural youths have been left out of the digital revolution, unlike in urban areas where social media is a mainstay both for information and entertainment.

While rural voters, mostly farm labourers, along with small rubber and oil palm holders, remained staunchly loyal to Barisan Nasional, young urbanites were forming their own opinions about politics and governance and questioning their own role in the country’s future.

Sadly, this change did not happen fast enough for the PR, as the urban vote bank failed to match the landslide of ballots cast in the rural hinterland.

Experts say youth will most likely play a big part in the major opposition rally planned for June 15 in the capital, but whether or not their protests will amount to change remains to be seen.