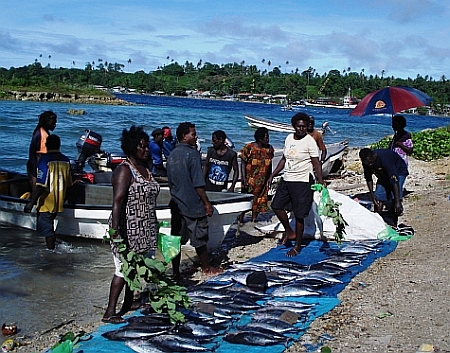 PORT MORESBY, Feb 13 2012 (IPS) - It was the decade-long civil war in the autonomous Bougainville region that inspired the founding of New Dawn FM, a community radio station recognised for contributing to the rebirth of civil society and development.

In 2001, a peace agreement ended a devastating conflict triggered by the destructive legacy of the foreign-operated Panguna copper mine. All radio broadcasting infrastructure on the island was destroyed during the war, which claimed 20,000 lives.

“Our biggest challenge starting New Dawn FM was actually finance, as we were just coming out of the crisis and we had no money,” recounted Aloysius Laukai, manager of the station. “But we received some assistance through UNESCO and the German government and we started the radio.”

The international funding paid for studio equipment and a transmitter.

Today Bougainville has a population of approximately 300,000. New Dawn broadcasts in English and ‘Tok Pisin’, the lingua franca, to nearly 50,000 listeners across northern Bougainville and has plans to expand coverage to the central town of Arawa.

“New Dawn broadcasts during the day 18 hours, while NBC broadcasts just about 12 hours per day,” Laukai said, explaining the differences.

New Dawn also has a news blog accessible where there is mobile network coverage in Central and South Bougainville. This is a significant communication service to rural areas lacking basic public services.

The station prioritises community empowerment, local current affairs and supports reconciliation. It uses live broadcasts of reconciliation ceremonies and landmark events taking place in different parts of the province to build inter-community trust where once there was bitter division.

“We cover a lot of activities the government is doing for peace and reconciliation,” Laukai explained. “If there is a happening, like an inauguration in Arawa, we broadcast from there to our listeners on Buka Island. Because our aim is to make sure they are in tune; North Bougainville is in tune with what is happening in South Bougainville.”

Another challenge is addressing the generation that missed out on education during the conflict and many ex-combatants who feel excluded from mainstream society.

‘We are working with World Vision (an evangelical relief and development umbrella organisation) now on an education project of adult learning programmes,” Laukai said. The station will begin broadcasting to adult learners throughout Central Bougainville this year.

Following ten years of peace, development is the next priority, especially for 97 percent of Bougainville’s population that lives in rural areas. New Dawn encourages farmers to seek and share knowledge via the airwaves.

“We have had problems with cocoa pod borer in the last year,” recounted Laukai, “Many (farmers) cut off their trees and planted new ones. But one farmer did his own experiment in removing shade trees, chasing the insects away with sunlight.” The story helped recover production.

In other areas of social development, the community broadcaster has been drawing on the power of international collaboration.

In 2010, it initiated a programme design workshop with the Commonwealth of Learning – an intergovernmental organisation tasked with increasing access to education in developing Commonwealth countries – Bougainville’s ministry of community affairs and non-government organisations (NGOs).

An important outcome of the workshop was ‘Bougainville Women Today’, a community-based learning programme addressing women’s health issues such as teenage pregnancies as well as malaria.

To actively involve the community, “we have established listeners’ clubs, like women’s groups,” Laukai elaborated. “They come and we design the programmes. Every time we broadcast a programme, we put it on a CD and we send it out to these listeners’ clubs. Then they listen to them at their own location and at their own timing.”

The pioneering broadcaster has faced challenges, although lack of media freedom is not one.

“Since we started, we haven’t encountered any problems, even from the government or from the members,” Laukai stated. “We feel like we are free to do what we are doing, but we must be responsible reporters.”

The media in PNG operate in a self-regulatory environment. The 1989 censorship act sets general standards of broadcasting, but media laws are enabling and follows national policy that states: “All people have the right to be dynamically involved in the processes of their own development and should have the opportunity to participate in communication processes at all levels.”

The main challenge was financial. “Since we started, we were really struggling to run the station,” Laukai admitted. “In 2008, we got some funding after we covered the funeral service of the late president and the local government gave us Kina 50,000 (24,125 dollars). Last year, they gave us a grant of another 24,125 dollars. But we are building our own capacity.”

Some revenue is generated by broadcasting parliament sessions and giving members time on air for questions.

According to Helen, a listener who works with a local development NGO, “the government programme is very helpful. We learn what the President and his government are doing. Many people we work with want to know what the government is doing on the island, so we can tell them.”

Word of New Dawn’s achievements spread and, in 2009, it received the Communication and Social Change Award from the University of Queensland, Australia.

This year the station is set to make a significant contribution in the national election. At a recent meeting between the electoral commission and national media, the station put forward a proposal to use frontline short messaging service or SMS technology, which it has used in operations since 2011, as a tool in preventing election fraud.

“We really introduced a good network which the whole of PNG can use to monitor the election,” Laukai proudly claimed.