UNITED NATIONS, Feb 2 2012 (IPS) - As UN Women celebrated its first birthday, its executive director Michelle Bachelet stressed that political upheveal and shrinking budgets are no excuse to push back the hard-won gains made by the women’s movement globally. 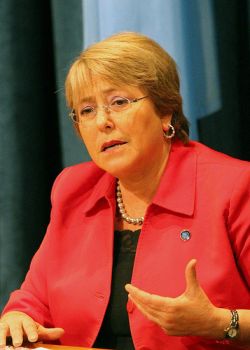 “My top priority for 2012 will be to make a renewed push for women’s economic empowerment and political participation,” Bachelet said at UN Women’s one-year anniversary press conference Thursday.

Formally known as the United Nations Entity for Gender Equality and the Empowerment of Women, UN Women was established to accelerate progress on meeting women and girls’ needs worldwide. Created by the U.N. General Assembly in July 2010, it became operational on Jan. 1, 2011.

Its six priorities are advancing women’s political participation and leadership; improving women’s economic empowerment; ending violence against women and girls; expanding the role of women in peace talks, peace building, and recovery; making budgets and plans benefit women and men equally; and increasing coordination and accountability across the U.N. system for gender equality.

“At this moment of historic change, we cannot afford to leave women out. Women’s full and equal participation in the political arena is fundamental to democracy and justice, which people are demanding,” Bachelet said.

“Without women, we cannot have a healthy economy. Yet today more than 800 million women lack the education, training, and opportunities to participate fully in economic life,” she added.

Bachelet cited examples of UN Women’s achievements on the ground: “In Liberia, women set up justice brigades and now the level of violence is lower and more perpetrators have been brought to justice.

“More than 250 women in Africa and Asia were trained to be mediators in conflict prevention, and peacekeepers were trained pre-deployment to prevent and respond to sexual violence. In Rwanda, gender budgeting is now used, more money is devoted to women’s health and maternal mortality has declined.

“Obviously, this is not something that UN Women can do alone. Equality depends on global mobilisation, the support of decision- makers, the voice of the media, and a concerted effort by the entire U.N. system and other development partners.”

In 2011, contributions to UN Women totaled 235 million dollars, representing a 33-percent increase from 2010 thanks to a wider donor base.

“Today I call for stronger commitment for women’s empowerment and gender equality. During this time of austerity and uncertainty, we cannot let budget cuts and political change cut progress for girls and women. Our challenge is not only to protect hard won gains, but to advance the rights of women.”

“Spain and Norway made serious commitments to UN Women and gender equality while other countries, such as the U.S., Germany and France, have not made it a priority in these times of budget constraint,” Charlotte Bunch, of the Center for Women’s Global Leadership and co- facilitator of the Gender Equality Architecture Reform (GEAR) campaign, told IPS.

“The financial crisis did not so much cause cuts in the UN Women budget since it is a new budget, but it has prevented them from being able to move forward vigorously on the desired plans for expanding the presence of UN Women on the ground at the country level,” Bunch added.

She said she hoped to see deeper cooperation with grassroots women’s groups in the coming years.

“In this first year, the process of setting up the organisation – structure, staffing, policies, etc. – has taken a lot of UN Women’s time, while civil society relations and programming have not been as strong a focus as GEAR would like to see.

“Now that the structure and personnel are in place, we hope that UN Women can be more effective in programmatic work and especially in listening to and working with civil society,” Bunch told IPS. “For example, GEAR is disappointed that UN Women has still not created any of the proposed civil society bodies – at the national, regional, or global level”.

“About the member states donations in this economic crisis situation, most of them still give the backing to UN Women in what they say, but until they put up more money, it is hard to say that many of them are strong supporters,” she concluded.