UNITED NATIONS, Feb 18 2012 (IPS) - After a week of tense negotiations, a United Nations preparatory committee concluded a final round of talks on Friday to define the rules of procedure for a global Arms Trade Treaty (ATT), which is expected to be finalised in July this year. 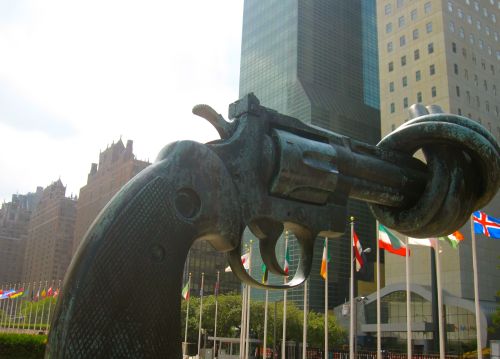 The ratification of the report by committee chair Ambassador Roberto Moritan of Argentina closed the last of four prepcoms held since 2010 to lay the groundwork for the ATT negotiations.

The report includes a “non-paper” by Moritan that will be the basis of this summer’s talks.

But the agreement on a vote by consensus, meaning that every state has veto power, may deeply compromise the adoption of a comprehensive treaty, he warned.

“There is a real risk for the final text of ATT not to be adopted in July,” he added. “Negotiations on the content will be extremely difficult.”

Need for a legally binding instrument

The current crackdown on protesters in Syria and other countries in the Middle East and North Africa has underlined the absence of any global regulation on the conventional arms trade, allowing arms to end up in the hands of human rights abusers, according to human rights groups.

“The ATT concerns the biggest treaty negotiation in the field of control arms, excepting the nuclear weapon,” Brian Wood, Amnesty International’s manager for arms control, told IPS. “It is all about saving lives and human rights.”

According to the United Nations Office for Disarmament Affairs, “The global trade in conventional weapons – from warships and battle tanks to fighter jets and machine guns – remains poorly regulated. No set of internationally agreed standards exist to ensure that arms are only transferred for appropriate use.”

“Many governments have voiced concern about the absence of globally agreed rules for all States to guide their decisions on arms transfers. That is why they have started negotiating an Arms Trade Treaty.”

Nearly every country in the world has some degree of involvement in the arms trade, as an importer or exporter, or in permitting arms shipments to transit through their territorial waters.

The United States is by far the biggest weapons manufacturer, followed by Russia, the “Big Three” in Europe – Germany, France, Britain – and China.

India, Pakistan and Saudi Arabia are all leading importers – but so are some of the major producers, such as the United States.

Concerned about the unchecked proliferation of weapons, in 2009, the U.N. General Assembly decided to convene a Conference on the Arms Trade Treaty in 2012 “to elaborate a legally binding instrument on the highest possible common international standards for the transfer of conventional arms”.

“As we have seen in the case of Syria, veto power leads to inaction and hampers the ability of the international community to prevent conflict,” said Jeff Abramson, coordinator of the Control Arms Coalition, referring to the recent paralysis in the U.N. Security Council.

“The will of the majority here who wants to see the arms trade brought under control must not be thwarted by a minority set on delaying and confusing the process,” he stressed.

He added that countries that were the most supportive of veto power over the final draft document included Syria, Cuba, Iran and the United States.

“Lives and livelihoods continue to be destroyed by an arms trade that is out of control, and the majority of governments that want to see a truly ‘bulletproof’ treaty must not be blocked by a small minority with vested interests,” he said.

Russia, China and the United States are all pushing their own agendas and oppose the integration of human rights into the treaty.

The U.S. opposes the inclusion of munitions, China wants to exclude small arms, and Russia wants a treaty regulating the illicit arms trade only.

“It is also deplorable that Russia argues it is responsible to continue sending weapons to a regime (Syria) that is bombarding its citizens,” said Abramson.

“A strong ATT with robust human rights criteria would make clear that arms transfers must not occur when there is a substantial risk of them being used to kill civilians and commit human rights abuses,” he said. “The sale of any arms to Syria right now is simply appalling.”

Civil society groups are urging strong rules that protect human rights and bar arms from being sent to those who likely to use them against civilian populations.

“It is about regulation and prevention based on risk assessment,” Wood told IPS.

“All types of arms should be included,” he said, including small arms and munitions.

On Feb 14, a group of Nobel Peace Laureates also called for the broadest possible criteria, scope and implementation mechanisms for an effective Arms Trade Treaty.