Social Unrest on the Rise in Southern Chile 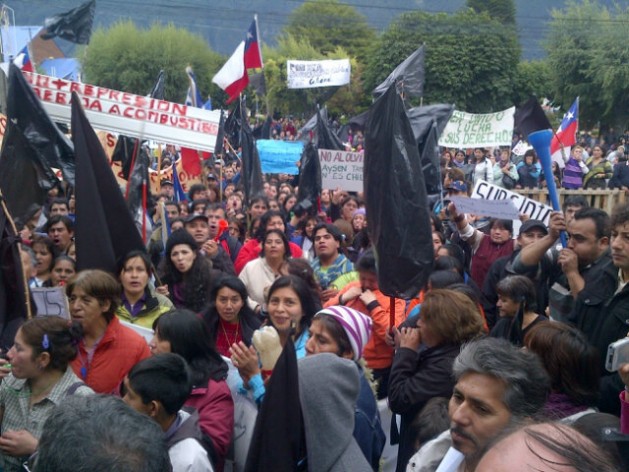 SANTIAGO, Feb 28 2012 (IPS) - The police have cracked down hard on demonstrators in the southern Chilean region of Aysén, who have been protesting the area’s isolation and high local prices of fuel and food for the past two weeks.

“We were being exploited,” Henry Angulo, leader of the artisanal fisherfolk of Puerto Aysén, told IPS, describing decades of absence of public policies that would reduce the high prices of food and fuel in the region.

Puerto Aysén, on the Aysén river, is one of several towns where protests are occurring in the region, which is 1,640 km from the capital. The region, which has a very cold climate, is far from areas producing food and fuel.

The people of Aysén formulated an 11-point petition, whose demands include putting an end to their isolation through road building and transport subsidies; compulsory popular consultation on projects planned for the region; priority distribution of the profits from exploiting natural resources within the region; improvements in health and education services; and lower prices for fuel and food.

“We have been able to unite our demands and our spirit, and that has given rise to a wonderful popular organisation. The people have risen up, but have also been capable of organising, joining hands and coming together. Such synergy is very difficult for the government to break down,” Julio López, the regional head of the National Association of Fiscal Employees (ANEF), told IPS.

The Social Movement for the Aysén Region (MSPRA) is aiming to get every item of their petition approved, without exception.

“None of these points is negotiable. They all reflect the region’s needs. With all 11 points met, we would manage to only just keep our heads above water. We are devastated, impoverished, and we are cheap labour for the HidroAysén (hydropower project) and for salmon farming; and only when we succeed with the petition will we begin to have the choice of sending our children to university,” said Angulo.

The key aim of the petition is a substantial reduction in prices of fuel like oil and gasoline, but also wood, which is essential for the daily life of the people of Aysén.

Gasoline costs two dollars a litre in this region; bread, a staple food in the Chilean diet, costs three dollars a kilo; and the firewood needed to heat a home costs over 200 dollars a month. The cost of electricity per kilowatt is twice the price paid by people living in Santiago.

The protests in Aysén are reminiscent of those organised in January 2011 against the hike in gas prices in the southern region of Magallanes, 3,000 km south of Santiago, which ushered in demonstrations on a scale unprecedented in this country since the protests led by students at the time of the return to democracy in 1990.

“The demonstrations in Magallanes were a tremendous incentive and a source of hope,” said López. They showed that “a determined, organised and mobilised people can fight effectively to counter the imbalance between central power and people who live in outlying regions.”

On Thursday Feb. 23, the government of President Sebastián Piñera confirmed regional Governor Pilar Cuevas, who is criticised by the protestors, as the sole official interlocutor to negotiate an end to the crisis, when all the signs indicated that the ministers of energy, finance and transport would travel to the area.

Energy Minister Rodrigo Álvarez explained that the purpose of the decision was to coordinate the action of the executive branch in the light of the escalating protests in the region, and he said special measures were being considered.

The finance minister, Felipe Larraín, whose presence was demanded by the protestors, reiterated on Friday Feb. 24 that it was not necessary for him to travel to Aysén to secure improvements, and accused the leaders of the protests of being “obstinate.”

In the meantime, the number of roadblocks is increasing, the threat of shortages is growing and confrontations with the police are becoming increasingly violent.

According to the protest organisers in Aysén, more than 150 people have been injured in clashes with the police. One of them, Teófilo Haros, lost an eye when a police officer allegedly shot him at point-blank range.

“The repression was to be expected, it was clear when the students were repressed (during the 2011 protests) that this (rightwing) government is a continuation of the (1973-1990) dictatorship,” said Angulo.

The political right was “just waiting to get back into power to batter the people, but the battle is just beginning, and the government will be responsible for whatever happens,” he warned.

According to López, “repression has reached such a level that instances of actual militarisation have occurred, and some nights the police go into neighbourhoods where there are no barricades and launch tear gas canisters, arrest and beat up anyone they come across, and shoot pellets right at people’s faces,” he complained.

The interior minister, Rodrigo Hinzpeter, said on Friday that the Aysén protestors “had gone too far,” and that the acts of violence “could have been avoided.”

The Chilean chapter of Amnesty International expressed concern over the reports of beatings and ill-treatment of detained persons and the lack of access to medical care.

“Once again we are seeing, in the context of a social protest, a great number of complaints over excessive use of force, unwarranted use of tear gas, the use of metal pellets and possibly arbitrary detentions,” said Ana Piquer, the executive director of Amnesty International-Chile.

For its part, the state National Institute of Human Rights reported it was “monitoring the situation and following the development of the demonstrations and police actions in the area, about which human rights observers have lodged complaints.”

Several teams of journalists posted in Aysén were “directly attacked by the police” Feb. 24 while reporting on the clashes, a national radio broadcaster said.