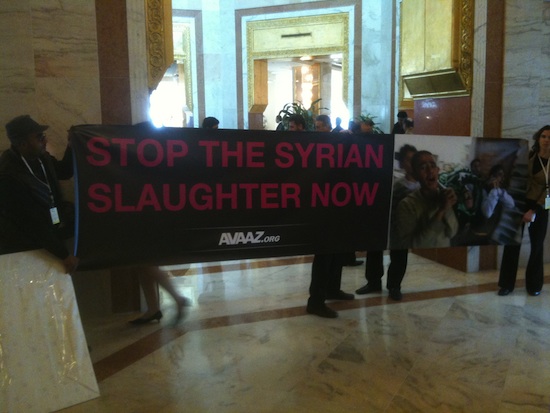 The nations present were all generally in support of Syria’s opposition and opposed to the authoritarian regime of Syrian strongman Bashar al-Assad. Iran, China and Russia, all high-profile international backers of the Assad regime, were notably absent.

The meeting in Tunis was designed to be a space in which the SNC and their international supporters could formulate a unified plan of action to stop the atrocities in Syria.

However, despite the absence of any Assad supporters, disagreements among the different parties present were more striking then any agreements reached.

While every participant offered rhetorical support to the Syrian rebels and universal condemnation of the Syrian regime, many important delegates were unwilling to back their expressed sympathies with concrete offers of military aid.

A serious rupture between Gulf Arab monarchies calling explicitly for regime change and immediate military support for the opposition, and democracies (including the United States and host nation Tunisia), who stressed caution and stopped short of demanding that Assad leave the country, proved to be a major obstacle to the conference.

The current Tunisian government came to power as the result of a revolution against a dictator similar to Assad, and most senior officials are former dissidents who spent decades imprisoned or in exile.

Thus it came as no surprise earlier this month when Tunisia expelled the Syrian ambassador in response to the violence in the country.

However, at this meeting the Tunisian President Moncef Marzouki said that Assad should receive immunity from prosecution and that international military intervention in Syria would be a “serious mistake.”

U.S. Secretary of State Hillary Clinton struck a similar tone, condemning the Assad regime and praising the opposition, but not offering any explicit military support.

The Syrian opposition came to this meeting hoping for tangible military promises in what is now an increasingly brutal and one-sided civil war; the measured language of Marzouki and Clinton was anathema to what the SNC and broader Syrian opposition wanted to hear.

Achraf al Moqdad, Syrian opposition activist and member of the Current for National Change, told IPS, “This isnt what the Syrian people want, they want a concrete resolution with the threat of military action, or (real) military action, to stop the crimes against humanity that are happening everyday, every night in Syria,” he said.

SNC’s press spokesman Mouayad AlKiblawi was even more direct. “(Marzouki and Clinton) never talked about self defense. We want to keep the peaceful image of our revolution but (the regime doesnt) allow us. What (does the international community) want us to do, do they want to exterminate the Syrian people, must there be 100,000 victims before the international community intervenes?” he asked IPS.

When asked what kind of international intervention the SNC wanted, AlKiblawi emphasised that the opposition wanted the international community to treat Syria like Libya, where air-strikes and direct military aid were instrumental in toppling the Qaddafi regime, and not like Yemen, where slow international pressure and promises of immunity finally caused the regime to relinquish power.

“The Syrian streets want any kind of intervention that (ends the) killing here, they don’t care about the method….We’re not Yemen, we have already gone (far) beyond that….it’s nonsense to apply the Yemeni solution in Syria, we don’t agree with that. We won’t live with killers (linked to the regime),” he said.

Clinton and Marzouki’s reluctance to offer military backing disappointed the opposition so much that at one point it looked like SNC representatives were going to walk out of the conference.

Meanwhile, the Gulf Arab dictatorships present at the meeting gave nearly unconditional backing to the democratic aspirations of the Syrian opposition.

Both Qatar and Saudi Arabia called for immediate shipments of arms to the Syrian opposition and explicitly advocated broader military support and the prosecution of Assad and his entourage.

Both these nations are absolute monarchies with few democratic freedoms. The fact that they are throwing their support behind the Syrian democracy movement may have more to do with their longstanding loathing of the Assad regime and his Iranian backers than to any principled commitment to democratisation.

The very fact that Qatar and Saudi Arab are dictatorships may allow them to support intervention in Syria, an idea that is extremely divisive in the Arab world and beyond, whereas Clinton and Marzouki have to be cognizant of the public opinion of their country’s citizens.

Most analysts in Washington believe that the U.S. public will not accept any more costly, uncertain military adventures in the Middle East and while many Tunisians support the Syrian revolution, there is a strong undercurrent of support for Assad because of his rhetorical stance against Israel and his vocal opposition to the United States.

The hard fact that foreign intervention in Syria is still extremely controversial in the international community was not lost on any of the conference’s attendees.

As the first delegates began filing into the hotel, a crowd of about two hundred pro-Assad protesters amassed in front of the conference waving Ba’athist and Palestinian flags and shouting slogans denouncing the U.S. and Gulf Arabs.

Minutes before Marzouki and Clinton arrived at the meeting, the protest turned violent, and demonstrators were beaten back by police.

While this meeting was supposed to present a unified front against Assad, it did anything but. For now, it seems that the bloodshed in Syria will continue.