Evangelist Sued in U.S. for Inciting Anti-Gay Hatred in Uganda

WASHINGTON, Mar 14 2012 (IPS) - A major U.S. civil rights group filed a federal lawsuit in Massachusetts Wednesday on behalf of a Ugandan gay rights organisation, the Sexual Minorities of Uganda (SMUG), against a right-wing evangelist leader for inciting hatred against homosexuals that has led to increased violence against LGBT persons in the East African country. 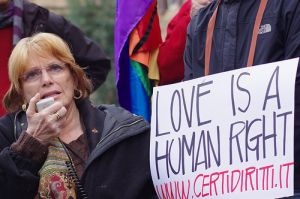 Activists rally in Rome in memory of David Kato, a Ugandan gay rights activist who was murdered on Jan. 26, 2011. Credit: Certi Diritti/CC BY 2.0

The lawsuit was filed by the New York-based Center for Constitutional Rights (CCR) in the home state of Scott Lively, the defendant, who heads the Abiding Truth Ministries, a fundamentalist Christian group.

He is also the author of “The Pink Swastika: Homosexuality in the Nazi Party”, a 1995 book that claimed Nazism was created and propagated by homosexuals, and a second book, “Seven Steps to Recruit-Proof Your Child”, a how-to guide for parents to “prevent” their children from becoming homosexual.

“Lively has been the man with the plan in this enterprise,” said Pam Spees, a senior CCR staff attorney.

“He long ago set out a very specific and detailed methodology for stripping away the most basic human rights protections, to silence and ultimately disappear LGBT people. Unfortunately, he found willing accomplices and fertile ground in Uganda,” she said.

Reached at the coffee house he owns in Springfield, Massachusetts, Lively, who has not been served yet, harshly denounced the lawsuit, which is being brought under the Alien Tort Statute (ATS), a 1789 anti-piracy law that, since 1980, has been used by foreign nationals to sue corporations and foreign individuals for human rights abuses committed overseas.

“It’s a frivolous lawsuit. Everything that they are alleging is speech, and speech is not actionable. You can’t bring a lawsuit in the United States saying that someone is legally liable for their speech.” he told IPS.

He called the claims against him “just outrageous” and “without basis”.

Lively began working with Ugandan anti-gay forces in 2002. According to CCR, he headed a conference in 2009 with Stephen Langa, another U.S. evangelist, titled “Seminar on Exposing the Homosexual Agenda”, in which he characterised the gay movement as an “evil institution”.

In the same presentation, Lively told audiences that homosexuals were a threat to children, committed child rape and “recruited” children into homosexuality.

Among the attendees, who included prominent politicians and members of the media, was Ugandan parliamentarian David Bahati. One month later, Bahati introduced the “Ugandan Anti-Homosexuality Bill”, which criminalised gay-rights advocacy, depriving LGBT activists of freedom of assembly, association and the right to be free of discrimination. It also called for the death penalty for being a “serial offender for the offense of homosexuality”.

At the same time, Ugandan tabloids and state-owned media called openly for persecuting homosexuals in what became a major campaign against them. After a number of attacks against homosexuals, many went into hiding.

In January 2011, an outspoken gay rights activist and chief litigation officer for SMUG, David Kato, was beaten to death in his neighbourhood after one tabloid published a photo of him and other advocates headlined “Hang Them”.

The murder drew international attention and strong denunciations from Western governments, including the U.S. and Britain, some of which threatened to cut aid to Uganda unless the pending bill was withdrawn.

The bill was shelved under international pressure but was reintroduced in October last year.

Gay rights advocates pointed specifically to U.S. evangelicals, including Lively and Langa, a member of the Washington-based extreme- right Christian group the Fellowship, as responsible for stoking the anti-gay hysteria that resulted in the death of Kato.

“U.S evangelical leaders like Scott Lively have actively and intensively worked to eradicate any trace of LGBT advocacy and identity…His influence has been incredibly harmful and destructive for LGBT Ugandans fighting for their rights,” said Frank Mugisha, executive director of SMUG, who received the Robert F. Kennedy Human Rights Award in 2011 for his work promoting LGBT rights amidst the hostile climate in Uganda.

“We have to stop people like Scott Lively from helping to codify and give legal cover to hatred,” he said.

Lively asserted that he is protected by the First Amendment of the U.S. Constitution which guarantees free speech.

“If you put everything I’ve said in context, nothing I said could motivate someone to hurt a homosexual. It’s taken out of context. They’re liars; they’re being dishonest,” he told IPS in a telephone interview.

But Heidi Beirich, director of the intelligence project at the Southern Poverty Law Center, said Lively’s anti-gay propaganda “is not harmless”. The center characterised his Abiding Truth Ministries as a “hate group” in 2008.

“When you lie about people, saying they cause genocide or they are Nazis, it often makes these populations vulnerable to violence,” Beirich told IPS.

“Lively is being ridiculous,” she said, “He’s (in Uganda) saying anti-gay things and riling up the population to pass this disgusting legislation. He may have a right to free speech, but he needs to be held responsible for what he says as well.”

The Alien Tort Statute has attracted considerable controversy as a tool for foreigners to hold alleged human rights abusers accountable in U.S. courts for their activities overseas. The Supreme Court upheld its use for that purpose in 2005 but is expected to review it again in June.

CCR said the suit against Lively marks the first time the statute has been wielded by victims of persecution on the basis of sexual orientation and gender identity.