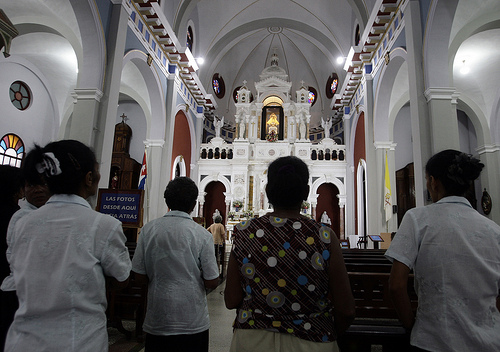 SANTIAGO DE CUBA, Mar 7 2012 (IPS) - The Catholic Church in Cuba expects people to welcome Pope Benedict XVI with warmth and enthusiasm, even though Catholics are not a majority here like they are in Mexico, the first stop on the pope’s Latin America tour that begins Mar. 23.

“Of course I plan to go to the pope’s mass. We are waiting for him,” said Liliana Fuentes, who lives in the working-class neighbourhood of San Pedrito in the westernmost province of Santiago de Cuba, 860 kilometres from Havana. “We are ‘paleros,’ that is our religion, but we also go to church,” she told IPS.

Palo Monte is an Afro-Cuban religion that is widespread in the eastern region of the country, where spiritualism is practiced as well. “People say that in the morning, Santiago families go to church, and in the evening, they go to the bembé (a party that honours the orishas, Afro-Cuban deities),” commented Omar López, director of the Santiago City Conservation Office.

“We feel proud about this visit by the pope. Santiago is very actively preparing to receive him,” López told a group of journalists who were invited to the city Feb. 22-23, when brigades of workers were fitting out Antonio Maceo Plaza for the mass that Benedict will celebrate there.

According to the pope’s agenda, which was released on Mar. 1 by the Catholic bishops conference, he will arrive in Santiago de Cuba on Mar. 26 at 2 p.m. local time (17:00 GMT). He will be received by President Raúl Castro, Havana Archbishop Jaime Ortega and other religious and government authorities.

The mass in Santiago’s plaza, which has a capacity for 250,000 people, is set for 5:30 p.m. on the same day. The bishops issued a message inviting “the entire town” to welcome Benedict with the “warmth and enthusiasm of the one who comes in the name of the Lord,” and to participate, along with the faithful, in the masses to be held in Santiago and Havana.

On the evening of the 26th, the pope will stay at a guest house built near the Basilica del Cobre, the shrine to Our Lady of Charity of El Cobre, Cuba’s patron saint. The reinforced concrete building, with its sombre-looking exterior, has seven bedrooms and seven bathrooms, a living room, dining room and all necessary comforts.

“It is in a discreet place and meets all of the internal and external security requirements,” commented engineer Fausto Vélez, who oversaw the construction project, which according to his estimates cost about 86,000 dollars. Vélez also oversaw the restoration of the basilica in El Cobre (which means “copper” in Spanish), a former mining town about 12 kilometres from Santiago.

Indigenous Cubans and African slaves were mercilessly exploited in the local copper mines, and the first major slave uprising in the country occurred here in the 18th century. That event is commemorated with a monumental sculpture at the top of Los Chivos Hill, formerly known as Cardenillo Hill.

On the morning of Tuesday the 27th, the pope will visit the shrine to Our Lady of Charity of El Cobre. It houses a 25-cm statue of the Virgin that was found floating in the nearby Bay of Nipe in 1612.

The Catholic Church has called on “all Cubans,” whether or not they are Catholic, to celebrate the 400th anniversary of that discovery, and declared 2012 a Jubilee Year.

Sources with the archbishop’s office of Santiago de Cuba told IPS that 8,000 to 10,000 people weekly visit the sanctuary, which has a capacity for 500. National and international pilgrimages are expected to increase through December as part of the Jubilee Year.

After his visit to the basilica, Pope Benedict will travel to Havana, where he will meet privately with President Castro. The official agenda does not mention any contact with former president Fidel Castro, although that is a possibility, Catholic media outlets reported.

According to protocol, during his second meeting with the Cuban president, the pope will introduce his entourage and Castro will introduce his closest associates and his family. One of his daughters is sexologist Mariela Castro, a tenacious advocate of sexual diversity rights.

José Félix Pérez Riera, assistant secretary of Cuba’s Catholic bishops conference, told foreign correspondents on Thursday, Mar. 1 that the pope’s programme did not include meetings with other churches or representatives from the world of culture, in contrast with the five-day 1998 visit by Pope John Paul II.

But like his late predecessor, who was the first pope to visit Cuba, Benedict will not meet with representatives of Afro-Cuban religions or dissident political groups that have no legal status in this country.

According to anthropologist María Elena Faguaga, people who follow Afro-Cuban religions are a majority in this Caribbean island nation.

African-based religions are a “cultural reality that the Church respects and tries to evangelise according to its mission,” Pérez Riera told IPS.

According to official Catholic records, about 60 percent of the Cuban population has been baptised in the Catholic Church. But experts say this does not mean a majority of Cubans are practicing Catholics. It is estimated that members of evangelical and other Protestant religions total more than one million in this country of 11.2 million.

“The number of practicing Catholics in Cuba is quite small in proportion compared to the number of Catholics in Mexico or other Latin American nations,” Orlando Márquez, spokesman for the archbishop’s office and editor of the magazine Palabra Nueva, admitted in an article published on the website of the bishops’ conference.

“However, the pope wants to be here with us, with the Catholic minority and with the majority devoted to Our Lady of Charity, all of whom comprise the Cuban nation, and he also wants to be with those who are in neither of these two groups,” Márquez wrote.