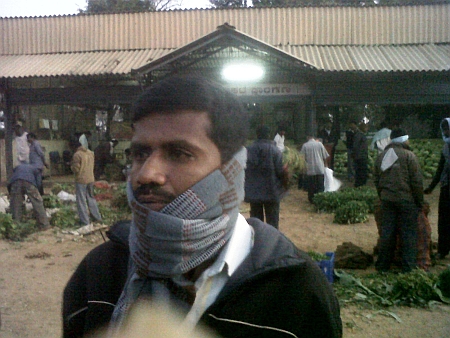 A farmer at a co-operative in Bangalore. Credit: Keya Acharya/IPS

The stagnation coincides with a period in which India’s economy has been growing steadily, with projections of a respectable growth of 7.7 percent expected in 2012 despite the prevailing global downturn.

“It’s obvious there is a major block in the growth of the agricultural sector in India,” says P.G. Chengappa, national professor with the apex Indian Council of Agricultural Research, “mainly because of stagnation in productivity and the lack of market support for perishables.”

The overuse of chemical fertilisers and pesticides – together with the government’s encouragement of water-intensive crops and related soil-salinity – has led to the now well-documented environmental decline in India’s faming lands.

India’s current policy is to help farmers by handing out huge subsidies on fertilisers and agricultural inputs, estimated to be worth 25 billion dollars in 2009-2010.

Small farmers, forming over 60 percent of India’s farming community, have neither the financial clout nor the access to groundwater or irrigation, while having to spend large sums on costly pesticides and fertilisers.

The government subsidies are cornered by industrial farming and benefit the fertiliser and chemical industry leaving smallholders out in the cold. An estimated 70 percent of India’s 1.1 billion people are small farmers.

During 1995-2010, over 250,000 poor farmers in India committed suicide, according to national statistics, mainly attributed to their inability to pay debts incurred on agricultural inputs.

While India’s soils are said to be failing due to continuous use of chemical inputs, small farmers, desperate to improve productivity, increase the doses of expensive fertilisers and pesticides and end up falling further into debt.

Curiously, the desperate situation of farmers remains unmitigated by the demand for fruits, vegetables and grains in urban India where increasing incomes have allowed organised food retail chains to mushroom, particularly in south India.

Direct dealings with farmers by these food retail chains are almost negligible, with most chains outsourcing their daily supply of groceries through contractors or middlemen. “Large retail chains keep a supply of green groceries only to attract the customer for convenience shopping,” explains B. Somesha, chief financial officer of Sahaja Organics, one company that serves as a direct marketing chain for its 500-odd farmer-members in Karnataka.

But this growth still does not allow farmers to cash in on the demand from retail food chains.

“They (retail chains) want a listing (registration) fee of at least 1,000 dollars plus three months’ credit, which is not possible for small operators,” says Somesha. On the other hand, they skim off high 40 percent margins.

“The APMC allows so many superfluous middlemen that it has actually institutionalised commercial agents and traders in India’s agricultural system,” complains Chengappa.

There are, however, better run government ventures such as the 12.25 million-dollar turnover Horticultural Producers Co-operative Marketing and Processing Society (HOPCOMS), in Bangalore, which works with 18,000 farmer-members.

HOPCOMS enjoys the loyalty of farmers who say they are happy with the assured payments and higher prices compared with what they are offered by the city’s four major markets.

“We don’t need to pay any commission to the market auction agent,” says 35-year-old Shivananda Attibele, who brings leafy greens to HOPCOMS twice a week from his two-acre plot at Jigani, 43 km outside the city.

The markets have commission agents, permissible under the APMC, who fix the day’s rate for vegetables and grains according to the quantities available for the day and the demand for particular produce.

The system has given rise to exploitation and extortion, with farmers forced to pay commissions to the agent and are often at his mercy because of credit they may have taken from him.

“Farmers take loans from the agents and have no option but to take whatever the agents give them,” says 56–year-old Muniraj, whose father began dealing with HOPCOMS 40 years ago.

Traders forming cartels that prohibit small farmers from selling their produce elsewhere is a countrywide phenomenon in India’s markets.

HOPCOMS managing director, Shanmugappa, agrees that the situation is bad for small farmers who are forced to sell their produce at wholesale auctions in city markets.

“There is a huge middleman lobby that is cornering very large margins,” says Shanmugappa. “That is why I say that the government should control the prices of vegetables at the ‘end-point’, the market, not at the ‘source’ by subsidising fertilisers, water and electricity.”

Shanmugappa says the method of government control of market rates for vegetables and grains is successful in several countries.

Satish Natarajan, a director of Sahaja Organics, believes civil society has been irresponsible about its link with farmers.

“We have absolutely no idea about where our food is coming from, or the plight of the farmers,” says Natarajan. “We need to build community support to ensure a regular income for our farmers.

Calls to amend APMC rules have come in from various states in India, but these have been overshadowed by the controversy over a plan to introduce foreign direct investment in the retail sector, that may finally break the middleman’s stranglehold.

India, along with Brazil, Russia and China (that form BRIC), is slated to be among the world’s top five grocery markets by 2015.