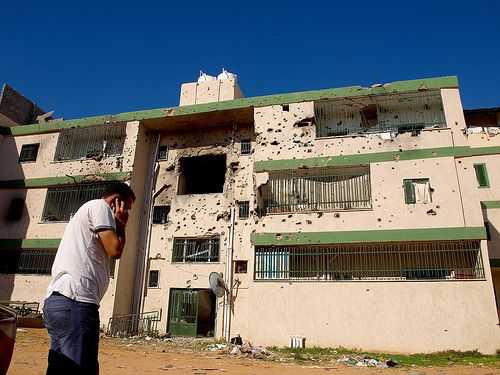 WASHINGTON, Mar 19 2012 (IPS) - Amnesty International (AI) released a scathing report late last week calling for an investigation into civilian deaths from air strikes during the 2011 NATO-led military intervention in Libya, which began one year ago Monday.

“It is deeply disappointing that more than four months since the end of the military campaign, victims and relatives of those killed by NATO air strikes remain in the dark about what happened and who was responsible,” Donatella Rovera, a senior researcher at Amnesty International, a human rights advocacy group based in the U.S., said in a release on Thursday.

“NATO officials repeatedly stressed their commitment to protecting civilians. They cannot now brush aside the deaths of scores of civilians with some vague statement of regret without properly investigating these deadly incidents.”

The report comes as a growing number of countries are calling for a similar intervention in Syria.

It says that after interviewing witnesses and victims’ families, researchers found that 55 civilians, including 16 children, were killed during the military campaign, and none have been offered reparations or even the promise of a thorough investigation by officials from NATO or Libya’s National Transition Council.

Many of the civilian deaths resulted from direct strikes on homes in residential areas where “AI, UN experts, other international NGOs and journalists found no evidence of military objectives at the strike locations at the time of the strike,” according to the report.

Russia and China, two permanent members of the U.N. Security Council that have expressed major doubts about both the justification and efficacy of a possible military intervention in Syria, abstained from the March 2011 vote on Libya.

Despite the termination of NATO’s jurisdictional mandate to conduct Libyan operations in October 2011, the report questions the alliance’s decision to forgo an investigation into civilian deaths during the campaign and its refusal to release detailed information about strikes involving civilian deaths that may have already been compiled internally.

NATO officials responded to an AI inquiry into the civilian deaths with a letter stating, “While NATO did everything possible to minimize the risk to civilians, in a complex military operation that risk cannot be reduced to zero. NATO deeply regrets any harm that may have been caused by those air strikes.”

“NATO’s response is tantamount to refusing to take responsibility for its actions. It leaves victims and their families feeling that they have been forgotten and that they have no recourse to justice,” Rovera added.

Earlier this month, the U.N.’s International Commission of Inquiry in Libya released its comprehensive report on war crimes and crimes against humanity that took place both before and subsequent to the March 2011 UNSC resolution allowing for “all necessary measures to protect civilians”.

“On limited occasions, the Commission confirmed civilian casualties and found targets that showed no evidence of military utility. The Commission was unable to draw conclusions in such instances on the basis of the information provided by NATO and recommends further investigations,” the authors wrote.

Human Rights Watch, another advocacy organisation based in the U.S., commended the report, particularly its conclusion that “international crimes, specifically crimes against humanity and war crimes, were committed by Qadhafi forces in Libya,” and agreed that further investigation into the NATO operation was appropriate.

“Human Rights Watch calls on NATO to investigate cases in which Libyan civilians died from its attacks during last year’s campaign… NATO took extensive measures to minimize civilian casualties and the number of victims is relatively low. But that does not lift the legal obligation to investigate questionable cases. NATO should also compensate the civilian victims of its campaign,” officials said in a statement last week.

The AI report emphasises a possible breach of the rules of international humanitarian law codified in the Geneva Conventions and their Additional Protocol.

“Many of the specific rules included in these treaties form part of customary IHL and are thus binding on all parties to any type of armed conflict, including on armed groups. Violations of many of these rules can constitute war crimes. All of the principles and rules cited in this briefing are part of customary international law and are binding on all parties to an armed conflict,” according to the AI report.

Although the NATO mission has ended, the Security Council voted last week to extend its mission in Libya to assist its democratic transition with “a commitment to democracy, good governance, rule of law, national reconciliation and respect for human rights and fundamental freedoms.”

The U.N. Humans Right Council is expected to release a resolution on Libya later this week.