LIMA, Mar 15 2012 (IPS) - The armed forces of Peru have launched a campaign to rescue at least 50 children who are in the hands of the last surviving remnant of the Maoist Shining Path guerrillas. 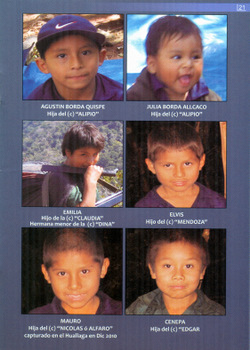 Military pamphlet showing photos of children in the hands of Shining Path. Credit: Joint command of the armed forces

The military and the government say the head of the group, Víctor Quispe Palomino, alias “comrade José”, kidnaps children from local villages, as part of the Shining Path (Sendero Luminoso) war strategy.

The rebel group is now only active in the Apurímac and Ene river valley region, an area known as VRAE, which stretches from the southern part of the country’s Andean highlands to the central Amazon jungle region.

The captured children are held in camps where they are indoctrinated and trained in the use of weapons, the authorities say.

Photos and video footage confiscated from captured Shining Path guerrillas reportedly show that dozens of children are being held by the group, including kidnapped local children from the region and the sons and daughters of “Senderistas”.

The armed adult combatants live in the same spot as the children, with the aim of warding off air attacks by the army’s Mi-17 gunship helicopters.

“They use the kids as human shields,” a high-ranking officer of the joint command, which is carrying out operations in the VRAE, told IPS. “They take them everywhere and make them participate in armed actions, as lookouts and messengers, and they even force them to kill off soldiers who are injured in the ambushes.

“If there is one reason the camps aren’t being bombed, it’s because of the presence of the children. They use them to protect themselves,” said the source, who asked to remain anonymous.

The joint command has managed to identify a number of the children, including several from the Ashaninka indigenous community, who live in Peru’s central jungle region.

Posters, leaflets and pamphlets with photos of the children held by the Senderistas have been distributed by the joint command throughout the entire 12,000-square-kilometre VRAE region, with the aim of raising awareness among the local population and persuading them to provide information that would help rescue the children.

Indoctrination, military training and the use of children in combat are part of the strategy followed by Shining Path since the start of the 1980-2000 armed conflict.

Quispe Palomino, the chief of the Shining Path remnant active in the VRAE, is himself the son of Martín Quispe Mendoza, a Sendero leader who was killed in fighting with government forces in 1991.

Martín Quispe made his sons Víctor, Jorge and Martín Maoist “pioneers”, and the three now head up the last remaining Sendero faction, since the Feb. 12 capture of the last of the original Shining Path leaders, Florindo Flores, who controlled the Huallaga Valley in the Amazon jungle in northern Peru.

“The worst massacre of campesinos (peasants) committed by the Senderistas was in Lucanamarca, Ayacucho on Apr. 3, 1983. They killed 69 people for opposing the armed struggle. One-quarter of the victims were children. ‘José’ was one of the attackers, and he was only 22 years old,” anti-terrorist prosecutor Julio Galindo told IPS.

“For Quispe, children are instruments of war. Part of his policy is for the Senderistas to have children in the camps, so they can receive instruction from a very young age,” he said.

“Víctor Quispe is reproducing his own personal experience. His father indoctrinated him and trained him in military tactics with the idea that he would continue the struggle, and now he is repeating the method with the children that he holds captive in the camps. He believes that some of those kids will stay in the armed struggle. It’s madness,” Galindo said.

In 2011, an army commando ambushed a Senderista camp and managed to rescue a young woman and her baby boy. The 19-year-old mother, whose identity has been kept secret for safety reasons, said she was kidnapped when she was just nine years old.

When she was older, she was forced to become the girlfriend of a Senderista fighter, who got her pregnant, she said.

María del Carmen Santiago, the head of the directorate of children and adolescents in the ministry for women and vulnerable populations, told IPS that the government had decided to take action with respect to the children held captive by the Senderistas in the VRAE region.

She said that in this case, Peru is acting as a signatory to the Optional Protocol to the Convention on the Rights of the Child on the involvement of children in armed conflict.

“The children who are rescued are given all the necessary care to help them recover from the extreme situation they have experienced,” said Santiago, explaining that the victims receive psychological treatment, education and healthcare.

In the VRAE region there are government centres run by the National Institute of Family Welfare, as well as municipal centres “that provide assistance to these minors who are at serious risk,” Santiago said.

Article four of the Optional Protocol to the Convention on the Rights of the Child specifically states that “Armed groups that are distinct from the armed forces of a State should not, under any circumstances, recruit or use in hostilities persons under the age of 18 years.”

“As a result, the State is obliged to make every effort to protect children who are exploited by an illegal organisation. These minors are violently subjected to a way of life that we reject,” said Santiago.

Galindo said that when the Senderista chiefs are brought to justice, they should not only be tried for terrorism but also for kidnapping children.

“I have seen the images of the children receiving lessons on Marx, Lenin and Mao, and then training with weapons,” he said.

“They teach them to hate and to kill. This should not happen in a civilised society. By doing this they are violating national laws and international regulations on protection of children,” he added.

On Jan. 23, 2010, the police captured Víctor Quispe Zaga, the oldest son of Víctor Quispe Palomino. He said he had escaped from a camp belonging to his father’s organisation.

The Sendero leader’s son agreed to cooperate with the legal system, to provide information on crimes that he had committed, as well as details that would help lead to the arrest of his accomplices.

He said that at the age of five he was sent to a Sendero camp to live with his father, where he grew up. He said he had received ideological indoctrination and military training, and was assigned to tasks as a combatant. He also confessed that he took part in several armed operations.

But when he found out that his father, “José”, had killed his mother, he escaped from the camp, where he said he had been living in horrible conditions. “I hate my father because he killed my mom,” he told the authorities.

“In those camps, the children are turned into little seeds of hatred,” said the high-ranking joint command officer.