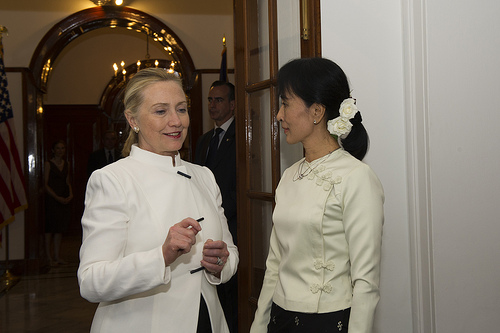 Many of the latest reforms came in the wake of Clinton's visit late last year to Myanmar, during which she met Daw Aung San Suu Kyi. Credit: State Department photo/ Public Domain

“The United States is committed to taking steps alongside the Burmese government and people as they move down the road of reform and development,” she said, adding that the administration will very soon name an ambassador to Yangon, establish an in-country U.S. Agency for International Development (USAID) mission, and support a “normal country programme” for Myanmar by the U.N. Development Programme (UNDP).

In addition, it will permit U.S.-based non-governmental organisations to undertake a variety of programmes, ranging from democracy promotion to health and education, in Myanmar, and facilitate visits by selected government officials and parliamentarians to the U.S., she said.

Perhaps most significantly, she said Washington will begin “the process of a targeted easing of our ban on the export of U.S. financial services and investment as part of a broader effort to help accelerate economic modernisation and political reform.”

“Sanctions and prohibitions will stay in place on individuals and institutions that remain on the wrong side of these historic reform efforts,” she added, stressing that Washington will “stand with reformers and democrats, both inside the government and in the larger civil society” going forward.

Her announcement comes in the wake of the landslide victory of the opposition National League for Democracy (NLD) led by Nobel Peace Laureate Aung San Suu Kyi in Sunday’s by-elections.

In addition to winning in her rural constituency, the NLD reportedly swept 43 of the 45 seats that were contested in the elections, the latest in a series of steps taken by the government of President Thein Sein over the past several months that have encouraged the administration here that its “engagement” policy is working.

In addition to freeing hundreds of political prisoners and legalising the NLD, the government has also enacted labour reforms, relaxed media censorship, and engaged Suu Kyi herself in an intensive dialogue that some analysts believe may result in her being asked to accept a cabinet-level position.

The government has also consulted with the International Monetary Fund (IMF), a process that has resulted, among other things, in ongoing reforms in the country’s extremely restrictive foreign investment regime and in Monday’s float of the national currency, the kyat, in what is widely regarded as the most far-reaching step yet in integrating Myanmar into the global economy.

Many of these reforms came in the wake of Clinton’s visit late last year to Myanmar, the first trip by a secretary of state to the country in nearly 60 years. Myanmar had been ruled by the military from 1962 until Thein Sein, himself a former general, was inaugurated as president last March.

Clinton’s trip, during which she met separately with both Suu Kyi and Thein Sein, marked the culmination of the administration’s “engagement” policy led by its special envoy, Derek Mitchell, who is expected to be nominated as Washington’s first ambassador to Myanmar in 20 years, and is currently in Europe consulting with his counterparts.

Reaction here to Clinton’s announcement was mixed, with some groups praising the action and others criticising it as premature.

“Today will be the best day for the Burmese regime, which is still killing innocent civilians in ethnic areas in Burma,” said Aung Din, executive director of the U.S. Campaign for Burma and a former political prisoner, who noted that, despite its sweeping victory Sunday, the NLD will hold only a small fraction of the 664-seat parliament.

“What they have achieved from the United States for giving seven percent of seats in the Parliament to Daw Aung San Suu Kyi is enormous,” he complained.

“We also suddenly learned today from the secretary’s statement that the United States has already changed its policy on Burma, from the dual track policy of sanctions and engagement to the policy of engagement, which is the perfect match for the Burmese regime’s policy of ‘give little and get more’,” he noted, adding that the administration will draw out its “targeted easing” policy to ensure that the reform process has become irreversible.

After Sunday’s elections, the Campaign urged Washington to wait to see to what extent the government would co-operate with Suu Kyi and the NLD before easing or lifting sanctions.

Human Rights Watch (HRW), a harsh critic of Myanmar’s human rights record, was more positive. “I think it’s good,” said Tom Malinowski, the director of the Washington office of Human Rights Watch. “It’s essentially what we recommended they do.”

“It’s a calibration, rather than a lifting of sanctions,” he told IPS. “The idea is to try to give a boost to civilians and reformers while continuing to sanction the military and military-owned businesses.”

According to a senior administration official who briefed reporters on the announcement, “The principle I think we’re going to be using to underline anything we do in terms of easing is what has the most benefit for the average Burmese. And so what sectors can provide the greatest bang in terms of employment and development for those who have been hurt by the system for so long?

The official noted that, “Burma is one of the few countries in the world where you cannot use a credit card, and it makes it extraordinarily difficult for some of the most basic kinds of economic exchanges. And we think some small steps will allow businesses to flourish, certain opportunities to take hold.”

The administration expects the European Union (EU), which has generally followed Washington in imposing sanctions against the regime, to take similar measures when its foreign ministers meet in Brussels Apr. 23 to coordinate their reaction to the latest events in Myanmar.

Both the EU and the U.S. were urged to immediately lift all sanctions on Myanmar by the leaders of the 10-member Association of Southeast Asian Nations (ASEAN) when they met in Phnom Penh, Cambodia, Wednesday. Myanmar, which was admitted to the group over Western objections in 1997, is scheduled to chair it in 2014.

“We called for the lifting of all sanctions on Myanmar immediately in order to contribute positively to the democratic process and economic development in that country,” they said in a communiqué read by Cambodian Prime Minister Hun Sen.

But in her statement, Clinton was clear that Washington is not yet prepared to do so. “This reforms process has a long way to go,” she said. “The future is neither clear nor certain. …We will continue to seek improvements in human rights, including the unconditional release of all remaining political prisoners and the lifting of conditions on all those who have been released.”