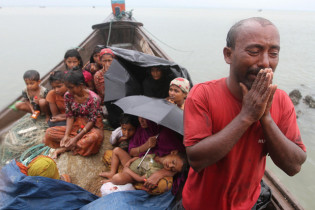 By Carey L. Biron
As governments around the world continue to discuss how to ease sanctions in Myanmar, fears are increasing that a sudden massive influx of foreign investment could be detrimental to the delicate ongoing transition.

By Correspondents
Aung San Suu Kyi, Myanmar's pro-democracy leader, and newly elected MPs from her National League for Democracy (NLD) party have refused to attend the opening session of parliament over a dispute regarding the wording of the parliamentary oath.

Multilaterals Warned Not to Go Too Far, Too Fast in Myanmar

By Carey L. Biron
As multilateral lending agencies prepare to seriously re- engage with Myanmar for the first time in decades, observers at the spring meetings of the World Bank and International Monetary Fund (IMF) are warning that a poor understanding of ground conditions in the country could jeopardise many of the early opportunities created by government-initiated reforms.

By Suvendrini Kakuchi
Japan’s plan to resume official development assistance (ODA) to Myanmar, announced this week, is problematic for a country faced with a dauntingly large disaster recovery budget for areas hit by the earthquake and tsunami last year.

By Marwaan Macan-Markar
Following her historic victory in Sunday’s by-elections Aung San Suu Kyi takes on a new role as opposition lawmaker, after a 22-year existence as Myanmar’s most famous political prisoner.

By Preethi Nallu
The celebrations started even before the polls opened on Apr. 1. The mood has been festive in Yangon and surrounding districts for the past few days, with jubilant revellers, sporting National League for Democracy (NLD) logos parading on open trucks, motorbikes, rickshaws, chanting party slogans and blasting patriotic songs made especially for the occasion.

By Marwaan Macan-Markar
For thousands of ethnic Kachins who fled fighting between government troops and rebels and survived a bitter winter in the refugee camps that dot northern Myanmar (or Burma), another test of survival looms – gale force winds.

By Marwaan Macan-Markar
In a move expected to deepen political reform, the quasi-civilian government in Myanmar (also known as Burma) is permitting the distribution of leaflets that will help thousands of people in the country’s ethnic enclaves learn to resist forced labour.

By Marwaan Macan-Markar
When he returned home after over two decades as a political exile, Aung Zaw, a prominent figure among Burma’s exiled media community, was served a slice of truth by the country’s notorious censorship board.

By Preethi Nallu
"Our past experiences have demonstrated that a mere ceasefire agreement will not result in the durable peace that we have long sought. Political peace is the only way forward."

By Preethi Nallu
As 'positive' news flows out of Burma - release of political prisoners, ceasefire talks in ethnic areas, increased freedom, formation of labour unions – people inside the country and exiles have been in heated discussion. What does 'reform' entail and are the changes going to be fully implemented?

Burma in the Throes of Change – Part 1

By Preethi Nallu
Moves by the Burmese government to settle ethnic conflicts in the country, notably with the Karen in the mountainous eastern part of the country, have caught most observers by surprise.

By Marwaan Macan-Markar
As he dismantles a 50-year military dictatorship without a shot being fired, Burmese President Thein Sein is resorting to the political art of compromise.

By Preethi Nallu
The release of 651 prisoners, a process which started this month, is being seen as a victory for activists and families who have had to contend with Burma’s notorious prison system.

By Jim Lobe
The administration of U.S. President Barack Obama Friday hailed the release by the Burmese government of hundreds of political prisoners, suggesting that it went far toward satisfying Washington's conditions for fully normalising ties between the two countries.
ADVERTISEMENT ADVERTISEMENT