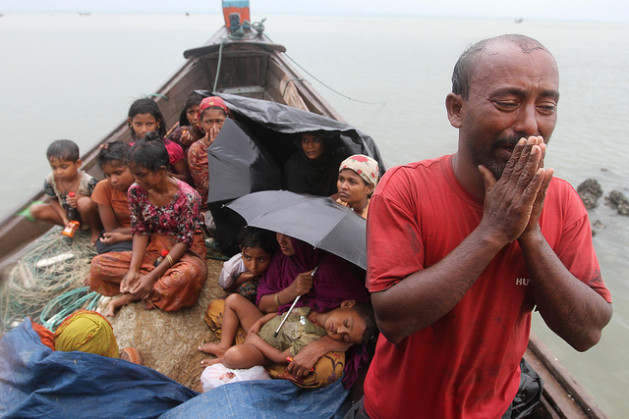 DOHA, Aug 15 2013 - An activist has been arrested in Myanmar after posting photos on Facebook from violent clashes between displaced Muslims and security forces in the country’s restive state of Rakhine, police and an activist have said.

It was not immediately clear what charges Than Shwe, a 29-year-old Rohingya Muslim, would face.

A police officer who refused to give his name because he was not authorised to speak to the media said on Wednesday that the man was trying to cause trouble during a visit by U.N. special rapporteur on human rights Tomas Ojea Quintana.

Quintana, who was touring the region after the deadly clashes, has urged the state government to release the activist, Thailand-based The Irrawaddy newsmagazine reported.

Aung Win, a well-known Rohingya activist, said that Than Shwe’s wife called Quintana on Tuesday and told him that her husband had been detained.

“He [Quintana] told our community leaders that he had already told the government to release all people who have been detained, included Than Shwe,” said Aung Win, according to the newsmagazine.

At least one person was killed and around 10 were injured after the clash in a camp for dispossessed Rohingya Muslims Friday Aug. 9, in the latest violence in Rakhine state, the United Nations refugee agency UNHCR said.

The most recent unrest occurred after the body of a fisherman was found in a creek near Ohn Taw Gyi camp, said Rakhine state spokesman Win Myaing, who called it a drowning.

But rumours quickly spread that the man had been beaten to death by police.

“He was bleeding from both ears. It looked like he had been smashed in the face by a rifle butt, all his teeth were gone,” said Aung Win, who saw the body before burial.

“This wasn’t a drowning. He was pretty clearly beaten and tortured.”

A dispute over the death and custody of the body sparked several riots, which were broken up by police who fired first into the air and then into the crowd, Win Myaing said.

Than Shwe, who works for an organisation that delivers food and supplies to camps for Rohingya Muslims, was accused of posting images of the dead and injured online, Aung Win said.

Twenty officers went to his home on Monday Aug. 12 and brought him to the police station, Aung Win said.

The United Nations has called for dialogue following the latest unrest.

“UNHCR is reiterating its call for peaceful dialogue and confidence-building between the [internally displaced persons] and government,” spokesman Adrian Edwards said in Geneva.

Myanmar, a predominantly Buddhist nation that only recently emerged from decades of isolation and military rule, has been wracked by sectarian violence in the last year, with more than 250 people killed and 140,000 others displaced.