UNITED NATIONS, Apr 5 2012 (IPS) - Asia and Africa will account for a hefty 86 percent of all increases in the world’s urban population in the next four decades, the United Nations said in a report released Wednesday. 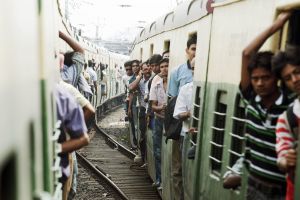 A view of passengers aboard trains connecting the suburbs of Kolkata, India. Credit: UN Photo/Kibae Park

The largest increases in urban population are expected to be in India, China, Nigeria, the United States and Indonesia, according to the latest revisions in the study titled “World Urbanization Prospects“.

Over the next four decades through 2050, India will add another 497 million to its urban population; China, 341 million; Nigeria, 200 million; the United States, 103 million; and Indonesia, 92 million.

The unprecedented rise in urban populations will pose new challenges, including shortages of food, jobs, housing, energy, infrastructure and a deterioration of the urban environment.

On the positive said, the study says, it will also provide new opportunities to improve education and public services in both Africa and Asia, “as more concentrated populations become easier to reach.”

Asked why there is a marked increase in urbanisation, primarily in Africa and Asia in contrast to Europe and Latin America, Jomo Kwame Sundaram, assistant secretary-general in the U.N.’s Department of Economic and Social Affairs (DESA), told IPS that two factors drive the rapid growth of urban populations in Africa.

The population in cities and urban agglomerations increases because there are significantly more births than deaths.

Secondly, Africa’s level of urbanisation has been relatively low, so the continent is now “catching up” with other major regions, he explained.

In some parts of Africa, scarcity of available arable and pastoral land is probably contributing to rural-urban migration, Sundaram added.

Likewise, the “natural” population in both India and China, the world’s two most populous nations with over one billion people each, is expected to grow through 2050, triggering domestic migration from villages to urban centres, according to the United Nations.

The projected increase in urban population in India and Nigeria between 2010 and 2050 will be higher than that of the past 40 years.

“This trend is particularly prominent in Nigeria, where its urban population grew by only 65 million between 1970 and 2010,” according to the study.

But now it is projected to increase by 200 million – the world’s third largest increase in urban population.

Sha Zukang, secretary-general of the upcoming Rio+20 sustainable development conference in Brazil in June, says the launch of the U.N. study is timely because world leaders, along with thousands of other participants, will come together “to shape how we can reduce poverty, advance social equity and ensure environmental protection on an ever more crowded planet.”

“We expect world leaders to come up with concrete action plans to realise sustainable cities for the future we want,” he added.

Asked what role the United Nations can play in mitigating the adverse consequences of urbanisation, Sundaram told IPS that governments that invest in and enable investments in urban sectors promote creation of employment in related industries and services.

For decades now, he pointed out, the U.N. General Assembly, the Economic and Social Council (ECOSOC), the Food and Agriculture Organisation (FAO) as well as the other Rome agencies have supported and led efforts to enhance food security and realise the right to food.

Similarly, the United Nations, the International Labour Organisation (ILO) and others have long been committed to employment creation. More recently, this has been articulated in terms of a commitment to full and decent employment, he added.

The United Nations, UN Habitat and others have been working to ensure decent housing for all, besides improving conditions in urban slums.

Secretary-General Ban Ki-moon’s “energy for all” plan seeks to reduce energy poverty, and significantly increase energy efficiency as well as the share of renewable energy.

“Indeed, none of these challenges are new, but they are all pressing and interacting in complex ways,” Sundaram pointed out.

Therefore, to address these challenges, an integrated and holistic approach to sustainable development is required.

He said heads of state and government will have an opportunity at the upcoming U.N. Conference on Sustainable Development, known as Rio+20, to take decisive actions to set the world on a new path that is economically viable, and socially and environmentally sustainable.