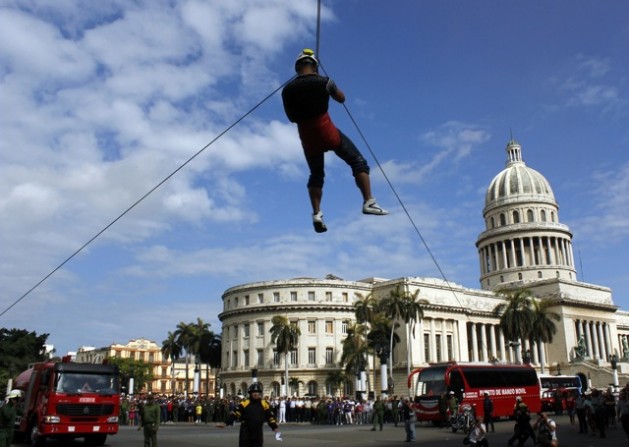 HAVANA, May 22 2012 (IPS) - A well-oiled prevention system that involves the entire country, from the highest spheres of government to the most isolated rural community, makes Cuba one of the best-prepared countries in the world when it comes to preventing deaths and mitigating risks in case of disasters.

Two-day community drills begin to be carried out a few weeks before the start of the Jun. 1-Nov. 30 Atlantic hurricane season, under the name Meteoro.

In the simulations run by the Civil Defence System, the authorities and ordinary Cubans rehearse their roles in prevention and evacuation plans to be implemented in case of disasters like hurricanes, earthquakes, drought, fires or epidemics.

On Sunday, May 20, the western province of Pinar del Río rehearsed measures to be taken in case of flooding, while the central province of Cienfuegos held an evacuation drill to prepare for a possible ammonia leak. And mountainous regions in the east of the country practiced what to do in case of a major earthquake. During the drill, hospital staff and patients are taken to shelters. Credit: Jorge Luis Baños/IPS

“This keeps us free of worry, because we know what we have to do in case of danger,” a nurse commented to IPS during an evacuation drill at the América Arias Obstetrics and Gynecology Hospital, which is located just 500 metres from the coast in Havana.

The drill followed the four-step framework established by the Civil Defence System in case of a hurricane: information, alert, alarm, and recovery.

During the “information” phase, the hospital stocks up on water, fuel, medicine and other basic supplies. And during the “alert” and “alarm” phases, the patients are taken to shelters.

“Our basic premise is to guarantee people’s safety,” said Osmany Galbán, director of the 280-bed hospital which serves more than 300,000 people in four Havana municipalities. Because of its proximity to the sea, the hospital is at risk of flooding during hurricane season.

In the weekend drill, the system for the prevention of human and economic losses, and for the protection of communication systems, including the national amateur radio network, and the means of production, was tested.

The activities also included rehearsals by people living in high-risk areas, joint exercises by the first-responder and disaster recovery agencies, and actions aimed at reducing the vulnerabilities identified in each area.

“In my area we know exactly which building we have to evacuate when a cyclone is coming or in case of intense rainfall, and where the pregnant woman, or the elderly woman who needs help, lives,” Raúl Díaz, a local resident of Old Havana, where rundown buildings abound, told IPS. Studies carried out in Cuba in the early 2000s found that over two million of the country’s 11.2 million people are vulnerable to disasters such as flooding, the rupture or overflow of dams, collapsed housing, or landslides.

This information is systematically updated by the risk reduction management centres, which evaluate risks of disasters at a national level. At the same time, the early warning system monitors the natural and technological variables that can turn into risks for the population and the economy.

Cuba’s experience in disaster prevention and preparedness is extremely interesting, especially for the rest of the Caribbean region, due to this country’s vulnerability to hydro-meteorological events, Bárbara Pesce-Monteiro, U.N. resident coordinator in Cuba, told the press.

Pesce-Monteiro was invited to observe the weekend drills, along with other U.N. representatives, diplomats, and foreign guests who attended a May 18-20 regional workshop on best practices and lessons learned in the last 50 years in Cuba.

The overall educational level of the people in Cuba, their widespread knowledge on what to do in case of emergencies, timely evacuation practices, and integrated functioning of the system are some of the keys to success, according to studies supported in this country by Oxfam, which sees Cuba’s experience as useful and replicable.

Put to the test mainly during hurricanes, Cuba’s disaster risk prevention system includes an early warning service, evacuation of all at-risk people, the protection of economic resources with an emphasis on food, and the immediate start of the recovery phase in the wake of a disaster.

José Rubiera, head of the Meteorology Institute’s Forecast Centre, said Cuba has become the country with the lowest number of deaths caused by tropical cyclones in the area encompassing the Atlantic Ocean, the Caribbean Sea and the Gulf of Mexico, due to the “integrated nature” of its disaster prevention and protection system.

The expert said Cuba was hit by 11 tropical cyclones between 1995 and 2006, including three tropical storms and eight hurricanes, four of which were intense. Nevertheless, only 34 people died, “an average of three deaths per storm per year.”

However, this Caribbean island nation has been unable to avoid enormous material damages and economic losses. The three hurricanes that hit Cuba in 2008 caused an estimated 10 billion dollars in damage that continues to affect the fragile economy.

And many experts warn that hurricanes will become more frequent and more intense as a result of climate change. (END)