TORONTO, May 8 2012 (IPS) - An indigenous group in the Amazon rain forest took its anti-oil message to Canada in a case rife with accusations of social and environmental damage that highlights the issue of securing consent prior to commencing exploration operations. 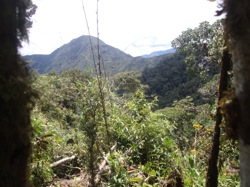 View of the Amazon rain forest in San Martín, Peru. An indigenous community there is accusing an oil company of social and environmental damage. Credit: Milagros Salazar/IPS

Peas Peas Ayui, president of the National Achuar Federation of Peru (FENAP), told IPS through an interpreter that Calgary-based Talisman Energy Inc. is operating within its ancestral territory, covering one million hectares, without first seeking approval. The Achuar people live on both sides of the Peru- Ecuador border in the rain forest.

“The communities affiliated with FENAP reject the presence of the company” and have no interest in the “additional help or benefits” that Talisman can offer at the risk of environmental contamination, Ayui said.

During three previous visits to Canada, the indigenous leader has issued this message, in some cases meeting directly with Talisman management. The most recent trip featured discussions with government opposition leaders and members who expressed “solidarity” with FENAP’s aim to shut down the Calgary firm’s venture into its homeland, noted Ayui, buoyed by legislators’ resistance to the activities in the Amazon.

The delegation was accompanied by Amazon Watch, a San Francisco-based non-profit organisation that supports indigenous people and aims to protect the rain forest. Discussions with key stakeholders and interested parties in Canada took place from April 21 to May 8.

Talisman, however, shot back at Ayui’s trespassing claim and pointed to the Peruvian government’s permission to engage in oil exploration in certain regions.

Moreover, FENAP lands are based 25 kilometres east of the oil company’s activity area known as Block 64, said media relations adviser Berta Gomez, adding that her employer has used about 115 hectares for exploration activities representing .015 percent of the total area. The oil giant started working in the block in 2004.

“We respect that some communities are opposed to oil development and we will not work there,” Gomez emphasised.

While Amazon Watch purports to represent the voice of the Achuar in Peru, it actually speaks only for the FENAP, an Achuar federation comprised of a number of communities opposed to Talisman’s activities, she argued.

Within Block 64, the energy interest has won the support and approval of the FASAM and OSHAM Achuar federations, added Gomez, referring to two new offshoot organisations. Overall, she said, Talisman has agreements with eleven organisations representing 66 directly and indirectly affected communities, more than 1,800 families and five different ethnic groups.

“We are committed to early and ongoing engagement with all stakeholders to share plans and address concerns,” including key authorities, the ombudsman and third-party representatives who act as observers, she said.

Ayui, the FENAP leader, said he has asked that Talisman President and CEO John Manzoni attend a meeting in the Amazon where his company is exploring, but the company has requested discussions be held in a nearby town, requiring the indigenous group to travel for three days.

Gomez confirmed that a March 30 meeting took place for the first time among Talisman’s country manager and corporate affairs manager and indigenous leaders against oil and gas development in San Lorenzo, Peru, with a promise to attend a local indigenous assembly, probably in May, to establish a final agreement regarding land boundaries.

The case spurs important questions about the nature of free, prior and informed consent, which is rooted in the United Nations (U.N.) Declaration on the Rights of Indigenous Peoples, according to a 2011 report by Sustainalytics, a sustainability research and analysis company headquartered in Amsterdam.

The report questions what exactly constitutes the consent of affected indigenous communities – a band council resolution, a referendum, the agreement of community leaders or the approval of all constituents?

Complicating matters is the fact that the Peruvian government awarded concessions and blocks to oil companies without consulting or informing the Amazonian communities, which it has traditionally regarded as “second-class citizens”, states a report published last year by the Ottawa-based think tank, the North-South Institute.

Among the FENAP’s objections, moreover, is a claim that Talisman triggered social problems within the Amazon’s indigenous population.

FENAP leaders raised grievances with the Peruvian courts about Talisman’s creation of “conflicts and divisions” in connection to a May 2009 confrontation among Amazon groups that “almost ended in violence,” Ayui recalled, but there has been no response. Demands that the Peruvian Congress force the company to vacate the rain forest have also been unanswered.

In his view, the energy firm’s exploration operations have torn apart communities, as eight have opted to sign agreements granting permission to work on their land in exchange for development assistance, while 44 have not.

Despite the oil firm’s investment in communities, Gregor MacLennan, Amazon Watch’s Peru program coordinator, questioned its interpretation of gaining the free, prior and informed consent of indigenous peoples. He accused the company of winning approval in any way it can – even after indigenous groups initially say no – by presenting more money and resources.

For its part, Talisman has always engaged with all stakeholders in a direct and peaceful manner in full adherence to human rights principles, Gomez stated. However, she said, the oil firm also asks that “the rights of the people to choose to work with us, in an open and transparent fashion, also be respected”.

Talisman plans to maintain dialogue efforts with federations and communities opposing its activities.

Rounding out indigenous allegations against Talisman is environmental contamination. The Calgary firm touted new technologies with no risk of repeating the damage done by oil industry players operating in the Amazon in the 1970s and 1980s, but Ayui refuted the claim.

The exploratory wells have affected his community’s hunting and fishing grounds by producing waste which leaks into streams during the rainy season, he charged, and poisons birds and other animals. His people’s ancestors also died on the lands Talisman is now exploring, he added.

MacLennan told IPS that he addressed the drilling fluids issue during a February meeting with Talisman, which acknowledged the problem but explained it will take “several months” for the arrival of a subcontractor and the adequate equipment to undertake the clean-up to a specific standard, a task that includes correcting the poor waste-disposal job carried out by another oil company in the past.

During the drilling of oil wells, the waste is stored in a “cuttings pit” complete with a roof to shield against rain water and a pit bottom protected with a “geomembrane” to prevent the direct contact of soil and waste, she noted, adding that the whole drilling pad is surrounded by an external ditch collecting fluid, mainly rain water, before it is released into the environment.

During Talisman’s drilling activities, known as SC3X and SN4X, there were no environmental incidents or claims from communities in the area of influence of its operations, Gomez said.

Talisman incorporates an indigenous environmental monitor from the local communities during the drilling projects. The monitor performs daily environmental inspections, immediately communicates problems, participates in monthly environmental monitoring and field environmental audits by regulatory agencies, helps to supervise the handling and shipping of waste and takes part in the abandonment activities and reclamation works, she added.

The company’s abandonment plan for the SC3X project, which details techniques for the treatment and final disposal of cuttings and an outline for re-vegetation and reclamation of the area, is awaiting Peruvian government approval, Gomez said.

Still, Amazon Watch and the FENAP are dissatisfied with Talisman’s environmental precautions and explanations. They dismissed oil companies’ tendencies to blame damage on subcontractors or on the challenges of working in the rain forest.

As the Canadian energy firm heads into a production phase within the next year, there are concerns that a potential spill due to human error would render the area “virtually irrecoverable”, MacLennan warned, spawning “an environmental disaster” destroying the livelihoods of thousands of people in the rain forest.