UNITED NATIONS, May 24 2012 (IPS) - Amnesty International delivered a scathing condemnation of global and national leadership in its 2012 global human rights report on Tuesday, conveying profound disappointment in such leadership for its failure to match the determination and resilience of ordinary civilians in their resistance to repressive regimes. 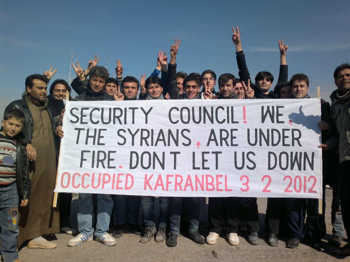 The report deemed the United Nations (U.N.) Security Council “increasingly unfit for purpose”, according to Salil Shetty, secretary-general of Amnesty International, one of the world’s most prominent non-governmental organisations (NGOs) focusing on human rights.

The report cited several areas of failure and called for a strong Arms Trade Treaty (ATT) with human rights provisions to ensure that politicians prioritise human rights over profit and power.

The veto power of the Security Council’s five permanent members, China, France, Russia, the UK and the U.S., who also happened to be among the world’s top arms suppliers, is “problematic”, said José Luis Díaz, head of office and U.N. representative at Amnesty’s U.N. office in New York.

With a single veto, these countries can put an end to proposed resolutions on international matters, regardless of other countries’ positions.

The “fragile situation” created by the momentous uprisings in North Africa and the Middle East over the past year and a half highlight the importance of global cooperation and action. The situation “could revert if the global powers don’t step up to the plate,” Díaz told IPS.

In the context of global decision making, “opportunistic alliances and financial opportunities” have “trumped human rights as global powers jockey for influence”, according to Shetty.

A prime example is Syria, which has continued violently cracking down on its own people without restraint. The Syrian government has been shielded by Russia’s and China’s vetoes on a Western- sponsored resolution threatening sanctions against Syria for civilian killings.

“The veto makes no sense,” Omar al Assil, an activist in the Syrian nonviolence movement, told IPS. “It makes people in Syria feel that they have been left alone to face the brutality of the regime, whilst China and Russia continue to sell arms and other countries just go on talking.”

Since the outbreak of Syrian protests in February 2011, over 9,000 people have been killed, according to U.N. estimates.

They have been targeted by weapons provided by Russia, France, Egypt and India, as documented in Amnesty’s 2005 report on arms in the Middle East and North Africa region (MENA). Russia is reportedly Syria’s biggest arms provider, while France supplied the country with more than 1.25 million dollars worth of munitions between 2005 and 2009.

While a critical eye upon U.N. proceedings is not undue, the organisation NGO Monitor added a new layer to an already complex situation when on Wednesday it presented the results of its research into NGO conduct in the MENA region.

NGO Monitor concluded that organisations including Amnesty and Human Rights Watch had neglected to expose human rights violations in the decade leading up to the uprisings.

Syria again stood out as a case in point. U.N.-accredited organisations had been operating on a policy of “file and forget”, said Gerald M. Steinberg, president of NGO Monitor.

“Amnesty is the most influential NGO in the framework of the human rights council. Where was it on the issue of Syrian violation of human rights for the last decade? Criticism should begin at home, before blaming outside powers,” Steinberg told IPS.

Meanwhile, in Syria, activists have taken the promotion of peace into their own hands, with the Syrian non-violence movement rallying people in peaceful acts of resistance, even as violence rages between the Syrian army and the loose network of resistance fighters known as the Free Syrian Army.

“Our weapon is civil disobedience,” said Assil. Civil disobedience through “strikes, the delayed payment of bills, and the blocking of traffic in Damascus” is seen as a means of involving those who fear speaking out against the regime.

It sends the message to the government that Syrians will not accept the torture, killings and detention of fellow civilians.

Although the free flow of arms allows for brutal crackdowns on protests, silencing individuals critical of oppressive states, “the violence makes us more determined,” Assil continued.

“After being held in detention centres, we participate in protests the next day. It reminds us that it is no longer about reforms – we need complete change.”

The international community has attempted to restrict the transfer of arms in conflict zones including, Bahrain, Libya, Egypt, Syria and Yemen, but “arms embargoes are usually a case of ‘too little, too late’ when faced with human rights crises,” said Helen Hughes, Amnesty’s principal arms trade researcher on the 2005 report.

Without comprehensive, legally binding international rules governing the arms trade, guns, bullets, tanks, missiles and rockets frequently end up in conflict zones and in the hands of those who commit war crimes and grave human rights abuses.

The Arms Trade Treaty has been in the making since 2006, and definitive discussions on its development are due in July of this year.

“The challenge now is that it is a strong treaty that ensures no arms are exported to countries where they might be used to commit human rights violations,” Van der Borght told IPS.

Amnesty’s report urged the international community to support grassroots struggles for justice by controlling the free flow of arms, realigning strategic interests in terms of greater global responsibility and following the lead of those whose collective moves for justice have set an example for leadership.

But by the same token, Amnesty should adhere to its own standards for global leadership through greater accountability and self-criticism.

“Protestors have shown that change is possible. They have thrown down a gauntlet demanding that governments stand up for justice, equality and dignity,” said Shetty.

“After an auspicious start, 2012 must become the year of action,” he added, and Amnesty is not exempt.