Back to the Future With Local Rice Seeds 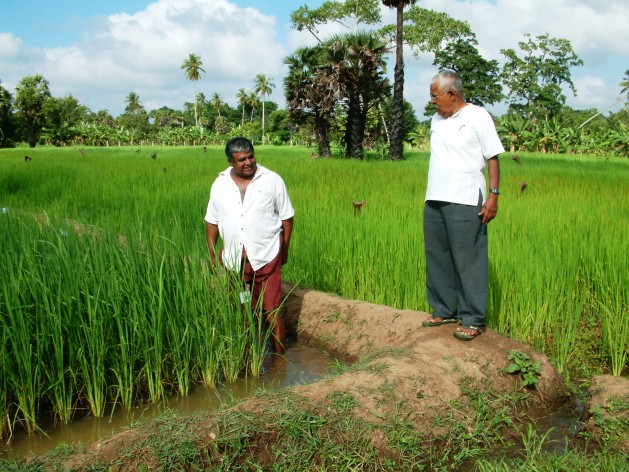 Charitha Wijeratne (right) at his organic rice farm in Anuradhapura

THRIPPANE, Jun 16 2012 (IPS) - By coaxing a bumper 3.2 tonnes of rice out of each acre on his organic farm in this district famed for its ancient Buddhist monasteries, Charitha Wijeratne has convincingly proved that using indigenous seeds does not affect productivity.

Teaming up with Alex Thanthriarachchi, 62, a reformed militant Marxist, Wijertane is on a mission to promote indigenous varieties of rice and other staples as the best way for Sri Lankan farmers to deal with changing climate.

Thanthriarachchi, currently secretary to senior minister S.B. Navinna, was jailed for his role in the failed 1971 Marxist uprising in Sri Lanka. He spent his two years in prison studying neighbouring India’s hybrid-based ‘green revolution’ that resulted in the extinction of thousands of local varieties.

Thanthriarachchi and Wijeratne scoured the countryside for years looking for traditional rice breeds known to be resistant to droughts and floods  and  requiring minimum farming inputs.

“This is organic farming at its best,” says Wijeratne, pointing to his rice-growing land in the Eppawela and Thrippane villages where he and his associates debunked the myth that indigenous rice produces lower yields than hybrids.

Wijeratne’s 10-hectare farm at Thrippane is lush with organically-grown coconuts, fruits and vegetables and attracts other farmers in Anuradhapura as well as academics and green activists.

Indeed, Anuradhapura district, whose Buddhist monuments have earned it recognition as a UNESCO heritage site, is now also emerging as a centre for indigenous seed revival.

Ajantha Kumari Ratnamala, 34, is among a group of farmers dedicated to training others who wish to use indigenous seeds. She has converted her own 2.1- acre paddy field in Anuradhapura into a showpiece for traditional seed varieties.

“Each acre gives me 80 bushels and although hybrids do give about 100 bushels, there are financial, health and environmental costs that are too often ignored in production reckonings,” she tells IPS.

“Pesticides and insecticides needed for cultivating hybrids are not only costly but also have persistent toxic compounds that seep into the earth and contaminate the water table,” Ratnamala says. “Organic farming uses  cowdungh, a natural fertiliser that also discourages  pests.”

Farmers in Anuradhapura, she said, are increasingly seeing the advantages of returning to hardy traditional varieties that are weather-resilient.

Nimal Wijeratne, 52, from Padaviya village, told IPS that of the 450-odd rice farmers in his area a third have switched to indigenous seeds, defying government efforts to encourage the use of hybrids.

In 2006, the government requested the Food and Agricultural Organisation (of the United Nations) for assistance in strengthening national capacity in hybrid rice development as a means to boost food security and alleviate poverty.

Rice, cultivated in Sri Lanka since 1,000 B.C., is the country’s single most important crop, taking up 34 percent of the total cultivated area.

Some 900,000 hectares are under rice, cultivated by about 1.8 million farming families. Sri Lanka currently produces 2.7 million tonnes of rough rice annually, satisfying around 95 percent of the domestic requirement, according to the department of agriculture.

Rice growers are heavily dependent on timely, optimum rainfall for good harvests, but established crop cycles have been disrupted by changes in rainfall patterns, rising temperatures, floods and droughts.

“The biggest problems for rice growers are floods, droughts and unpredictable weather conditions,” says Prof. Champa Nawaratna, senior scientist at the agriculture department of the University of Ruhunu.

Nawaratna said the weather has been getting more unpredictable over the past five years. “This year the rains came in February-March, but we are not sure about next year,” she said, recalling the floods two years ago which destroyed 50 percent of the crops.

“Based on existing research conducted at the University of Ruhunu we can say that 50 percent of crops over a five-year period are likely to get damaged by floods, though even this data is unreliable with weather patterns changing so rapidly,” she said.

Nawaratna said colleagues in her department have also tested indigenous paddy varieties and found them to be more resistant to the vagaries of the weather.

Independent studies conducted by the Farmer Federation for the Conservation of Traditional Seeds and Agri-Resources, a major non-government organisation based in Homagama, outside Colombo, corroborate the university’s findings.

Waruna Madawanarachchi, director of CIC Seeds Pvt. Ltd, the largest single local manufacturer of hybrids in Sri Lanka, testifies to the fact that there is demand for traditional rice breeds and that his company actually outsources popular varieties like ‘Suwadel’ and ‘Kaluheenati’.

Kaluheenati, a dark red grain, is highly nutritious and traditionally recommended for nursing mothers while Suwadel is a white and fragrant variety.

“Farmers are producing their own hybrid seed which represents 80 percent of the demand while the balance 20 percent comes from the formal, organised sector,” Madawanarachchi said. “However, once in four years, farmers need to come back to us to buy new hybrid seeds from companies like ours.”

According to Madawanarachchi, hybrid rice varieties are well established in Sri Lanka and account for 99 percent of the total market for rice seeds, estimated at 4.5 million bushels (122,468 tonnes) annually.

But the bumper crops of fine, organically-grown indigenous rice reaped by Wijeratne and Thanthriarachchi in Anuradhapura show which way the wind is now beginning to blow.

Among those impressed by the achievement of the duo in producing climate-resilient organic rice is R.W.K. Punchihewa, a senior lecturer in agriculture biology at the University of Ruhunu, who also runs his own two-acre organic farm at Padukka in the western region.

“For 24 years I worked at the department of agriculture and felt we were going the wrong way in pushing a policy based on imported rice-farming inputs,” Punchihewa told IPS.

“Pesticides and chemical fertilisers have killed the fish in the hybrid-growing rice fields and ruined biodiversity in one the world’s best ecosystems,” Punchihewa said. “Worse, farmers (growing hybrids) are eternally in debt because of the high cost of inputs

“We need to revive traditional practices if agriculture is to be sustainable in Sri Lanka.”