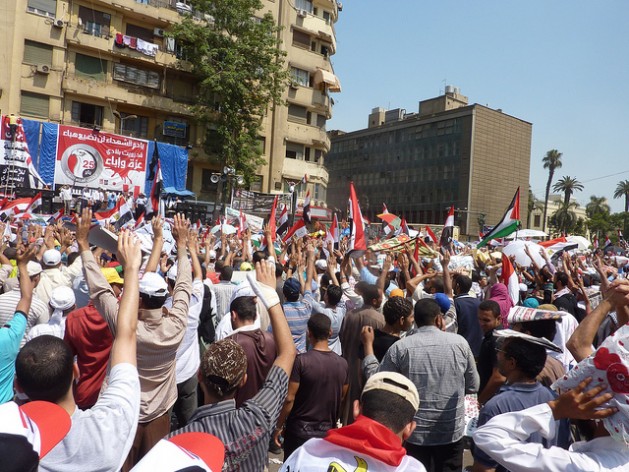 Many Egyptians fear an official declaration for either candidate – expected imminently – could lead to a confrontation between the Brotherhood and its Islamist allies on one side and Egypt’s ruling Supreme Council of the Armed Forces (SCAF) on the other.

“I smell blood. The atmosphere is extremely charged,” Abdullah al-Sennawi, prominent journalist and political analyst, told IPS. “A serious power struggle between the SCAF and the Brotherhood now appears inevitable.”

Preliminary results of Egypt’s hotly-contested Jun. 16-17 presidential runoff vote put the Brotherhood’s Morsi ahead with 52 percent of the vote. On Wednesday, Jun. 20, a group of reformist judges appeared to corroborate these claims, putting the final count at 13,238,335 votes for Morsi and 12,351,310 for Shafiq.

In a first round of polling late last month featuring 13 candidates, Morsi came in first with 25 percent of the vote, while Shafiq – against all expectations – came in a close second with 24 percent.

Final runoff results were initially scheduled to have been announced on Thursday, Jun. 21. But on Wednesday evening, Egypt’s Supreme Presidential Elections Commission (SPEC) declared that it needed more time to examine more than 400 claims of electoral fraud filed by both campaigns.

Final results are now expected to be announced on Sunday, Jun. 24, but the SPEC has not ruled out the possibility that they could be postponed further.

Morsi, who currently heads the Muslim Brotherhood’s Freedom and Justice Party (FJP), runs on a platform of which social justice, economic development and the gradual implementation of Islamic law are central planks. Outlawed under the former regime, the Brotherhood – which won almost half the seats in Egypt’s first post-Mubarak parliament – represents Egypt’s most formidable political force.

Shafiq, meanwhile, a former head of the Egyptian Air Force and long-time civil aviation minister under Mubarak, served as the ousted president’s prime minister during last year’s Tahrir Square uprising. Shafiq, too, promises social justice and economic development, but his campaign mainly rests on the pledge to restore domestic stability after a year and a half of post-revolution turmoil.

At a Thursday press conference, Shafiq dismissed the preliminary results favouring his rival – which he claims are fraudulent – and reiterated his own claim to victory.

“I’m confident I will be named the next president. The numbers are indicative of my victory, which will be confirmed by the SPEC on Sunday,” Shafiq stated. He went on to allege that the Brotherhood’s vote count had been “tampered with” and was “thus invalid.”

“The postponement of official results has generated considerable public mistrust,” the Salafist Nour Party, which backs Morsi’s bid, declared in a statement Thursday.

“We’re prepared to accept any result, as long as it is produced fairly and transparently,” Magdi Sherif, head of the Guardians of the Revolution Party (which boycotted the runoff vote), told IPS. “But this lengthy delay throws the fairness of the elections into doubt.”

The SCAF, meanwhile, has repeatedly vowed to relinquish executive authority – which it has wielded since Mubarak’s ouster early last year – upon the election of a new president. Several recent developments, however, suggest that the military council is loath to hand over its considerable powers – especially to an Islamist head of state.

On Jun. 14, Egypt’s High Constitutional Court declared the regulations governing last year’s legislative elections to be unconstitutional. Two days later, the SCAF dissolved the People’s Assembly (the lower house of Egypt’s parliament), almost half of the seats of which had been held by the Brotherhood’s FJP.

‘”There was no need to dissolve the entire assembly,” Atef al-Banna, a professor of constitutional law at Cairo University, told IPS. “And the ruling fails to provide any rationale for doing so.”

Three days later, the SCAF issued a constitutional ‘addendum’ granting itself full legislative authority at the expense of the dissolved Islamist-led parliament. The addendum also gave the military council full control over the constitution-drafting process, also at parliament’s expense.

“This ‘addendum,’ which was unilaterally imposed by the SCAF, represents a coup against Egypt’s democratic transition,” said al-Sennawi.

“Any constitutional amendment like this must be put before a popular referendum for approval,” said al-Banna.

In response to these developments, and fearing the imminent declaration of a Shafiq presidential victory, tens of thousands of protesters – mostly Morsi supporters – turned out at Tahrir Square on Friday and Saturday. The demonstrations were organised and endorsed by the Muslim Brotherhood and its FJP, along with Salafist parties, the moderate Islamist Wasat Party and a handful of secular revolutionary groups.

“We all know Morsi won (the election),” FJP member Ahmed Samir told IPS from the flashpoint square. “So we plan to stay here until they declare Morsi the rightful winner, reverse the dissolution of parliament and annul this so-called constitutional addendum.”

Ahmed Maher, general coordinator of the secular-revolutionary April 6 youth movement, which played a prominent role in last year’s uprising and has recently thrown its weight behind Morsi, told IPS: “If Shafiq is declared the winner, we’re prepared to launch another revolution.”

While the mood in Tahrir – and throughout the country – remains fraught, demonstrators stress their commitment to peaceful protest.

“We are absolutely committed to the peaceful nature of our demonstrations; we would absolutely under no circumstances resort to violence, regardless of who is eventually declared president,” said the FJP’s Samir. “We only call on the military not to employ violence against us.”

Apparently taking no chances, the SCAF issued an official statement on Friday asserting that “any attacks on public or private institutions” would be “dealt with immediately by police and the army.”