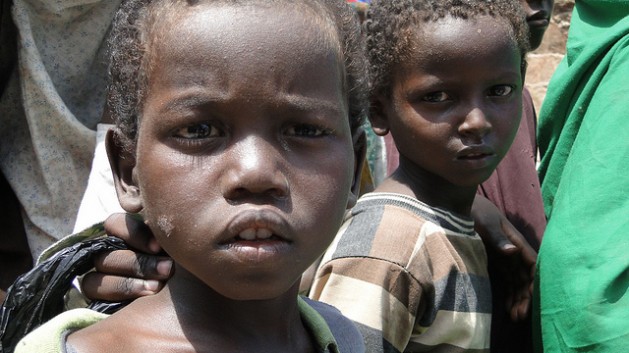 Children displaced by drought line up to receive food in Mogadishu. The poor are hardest hit by climate change and other problems. Credit: Abdurrahman Warsameh/IPS

A proposal for a 30-billion-dollar global fund for sustainable development – initiated by developing countries – was shot down even before it could get off the ground.

The United States and the 27-member European Union (EU) refused to approve the proposal, leaving in doubt how an ambitious blueprint for sustainable development, titled “The Future We Want,” is to be financed over the next decade.

“Without funding commitments, the Rio+20 outcome is likely to go the same way as previous documents of this nature, adopted with much fanfare and at great cost by world leaders,” Ambassador Palitha Kohona, Sri Lanka’s permanent representative to the United Nations, told Terra Viva.

The funding is essential for most developing countries if they are to implement the lofty aspirations expressed in the 49-page outcome document.

“If developing countries are not brought on board, the outcome document will remain a pious list of unfulfilled dreams. The future that we all want must be a future that we all can have,” said Kohona, a former chief of the U.N. Treaty Section, who has been closely monitoring negotiations both at Rio+20 and the politically-disastrous 2009 climate change conference in Copenhagen.

But all is not lost, according to Martin Khor, executive director of the South Centre, a Geneva-based think tank of developing nations.

“The document is quite fair and balanced, given the current negative state of international cooperation for development,” he said.

Khor told TerraViva that at least the final document reaffirmed the Rio principles, including the common but differentiated responsibilities, which is precious for developing countries as it spells equity in sharing the costs of shifting to an environmentally friendly economy.

“Until almost the last day it seemed like some developed countries would refuse to even reaffirm what was committed at Rio 20 years ago,” Khor said.

It is a sad state of affairs, he said, that a reaffirmation of Rio, which in previous times would have been automatic, would now be considered a success of Rio+20.

“A weakness is that there is no commitment by the North for new funding or for concrete technology transfer,” he added.

However, the 132 member Group of 77 (G77) developing countries, plus China, managed to get a decision to start a U.N. General Assembly process to consider a new financial and a new technology mechanism. But it will be a tough fight to actually set these up.

“The global economic crisis has thrown a long shadow over Rio+20. Nevertheless, the G77 and China won a victory in having most of their issues accepted in the document,” Khor said.

Secretary-General of the Rio+20 summit Sha Zukang admitted the hurdles that had to be cleared before reaching final agreement.

“We think the text contains a lot of action. And, if this action is implemented, and if follow-up measures are taken, it will indeed make a tremendous difference in generating positive global change.”

Of course, he added, this document is the product of intensive protracted negotiations. And therefore, it is a compromise text.

“Like all negotiations, there will be some countries that feel the text could be more ambitious. Or, others who feel their own proposals could be better reflected. While still others might prefer to have their own language. But, let’s be clear: multilateral negotiations require give and take.”

Meena Raman, a negotiation expert at the Malaysia-based Third World Network said, “The outcome document does not have the ambition needed to save the planet or the poor but it has not taken us backwards, particularly given our initial fears that Rio+20 might be Rio-40.”

“This minimal outcome signals a lack of political courage, leadership and commitment from developed countries, and those campaigning for the future we really want will have to redouble our efforts.”

Ambassador Kohona said, “It is not going to be clever to disguise disinclination with clever terminology. We all know how donor countries mobilised massive funds at very short notice to deal with the financial crisis for which they themselves were responsible.”

“The environment may be approaching a much more serious crisis level,” he warned.