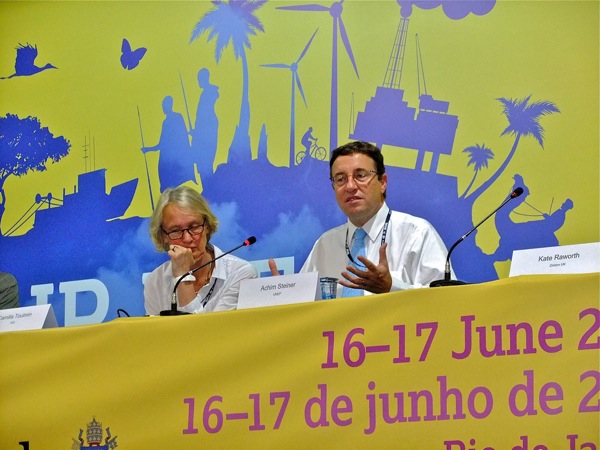 RIO DE JANEIRO, Jun 19 2012 (IPS) - The science is crystal clear: humans are threatening Earth’s ability to support mankind, and a new world economy is urgently needed to prevent irreversible decline, said scientists and other experts at an event on the sidelines of the Rio+20 Earth Summit.

Yet the Global Environment Outlook report, or GEO 5, which was launched on June 6 and assessed 90 of the most important environmental objectives, found that significant progress had been made only in four in the 20 years since the first landmark summit in Rio in 1992.

Achim Steiner, the executive director of the United Nations Environment Programme (UNEP) said the results of GEO 5 were “depressing, even to me”.

“This ought to have us shaking in our boots,” Steiner told TerraViva at the Fair Ideas conference that concluded Sunday. “It is an indictment of our behaviour over the past 20 years and of the governments we elected. We need an honest conversation about why we are not turning things around.”

Instead, “what’s happening right now in the RioCentro (Rio+20 official site) is that science is being picked out of the text of the final agreement,” Johan Rockström, executive director of the Stockholm Resilience Centre in Sweden, told the conference.

Rockström said he had received updates from the negotiations that the United States and some of the world’s least developed countries were attacking the science showing humanity is pushing up against “planetary boundaries”.

Climate is only one of those “planetary boundaries”. Another is the ongoing decline of biodiversity, where so many plants and animals are going extinct that the Earth’s living systems, upon which humanity depends, are unravelling. Fresh water is another planetary boundary. Water is a limited resource, yet water use has increased six-fold in the past century.

“The science is absolutely clear: we are up against the edges of the planet’s ability to support us and approaching irreversible tipping points,” Rockström said.

What the science is also showing is that “we are in a situation where we have to share finite budgets for carbon, phosphorus, freshwater, land and so on”, he added. It is clear the majority of the world – that is, countries of the global south – has used far less of those “budgets”.

If rich countries are to consume their fair share, they will have to use less, Rockström explained, and for that reason, the very science of planetary boundaries is under attack by certain interest groups whose profits rely on the ability to use these resources, no matter how destructive.

“There is no question rich countries must reduce their ecological footprint,” agreed Steiner.

The term “ecological footprint” refers to the system of measuring how much ecosystem it takes to support each human life on the planet. The average American footprint is many, many times larger than the average African footprint.

At the same time, poor countries need to learn how to green their economies, Steiner said. Above all, “none of this can be done under the current economic system that is imprisoning us.”

What Rio+20 is really all about is the beginning of a new world economy and a new era of international governance. “More will come from this than expected, but not in the sense of formal agreements or documents,” he said.

“We have hard choices to make. We cannot have win-win situations all the time,” said Camilla Toulmin, director of the International Institute of Environment and Development (IIED) based in London.

The bargain is easier said than done, however, and negotiations have morphed into a political battle that is no longer about science or development. It is a battle between “those who feel their interests are threatened and don’t want change and the rest of us who recognise the compelling need for change”, Toulmin said.

“It would be great if we could work this out rationally… but I fear we’re headed for an unplanned and violent resolution, judging by the current state of negotiations.”