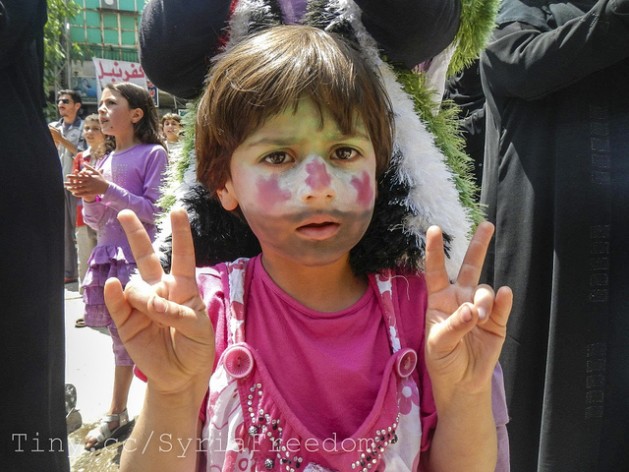 Demonstration against the Assad regime in Kafranbel, Idlib, Syria on May 20, 2012. Credit: Freedom House2/CC By 2.0

UNITED NATIONS, Jun 9 2012 (IPS) - With the international community vowing to ratchet up pressure on the Syrian government, non-violent activists say they remain undeterred even as the situation seems to be deteriorate daily.

The peaceful demonstrations that marked the beginning of the Syrian uprising in February 2011 have faded into a distant past, and calls for a diplomatic resolution to the conflict now contend with a context of escalating abuses.

Following the May 25 attack on Houla, in which 108 people were killed, including 49 children, many under the age of 10, and recent reports of large-scale killings in Mazraat al-Qubeir and Kafr Zeta, the pressure has also mounted on U.N.-Arab League joint special envoy Kofi Annan.

Annan’s faltering peace plan calls for an end to violence, access for humanitarian agencies to provide relief to those in need, the release of detainees, the start of inclusive political dialogue that takes into account the aspirations of the Syrian people, and unrestricted access for the international media.

“We need support, but not in arms,” Omar al Assil, an activist in the Syrian nonviolence movement, told IPS.

“Weapons do not help anyone,” he added. “Our weapon is civil disobedience.”

Active since the dawn of the Syrian uprising, the Syrian Non-Violence Movement has endeavoured to engage a silent majority in actions of resistance and civil disobedience to mark their contempt for the regime.

Activists have staged innovative and powerful forms of resistance, largely symbolic but high risk nonetheless. These include operating speakers at a distance to voice amplified messages condemning the regime and leaking red paint into fountains.

“We turn the water red to send a message that this is the blood shed in the streets,” Assil told IPS.

These symbolic forms of protest, combined with Internet awareness campaigns and strikes, seek to unite individuals in the quest “to build a new state built on dignity, freedom, and democracy”, according to Assil.

But violence in Syria continues unabated and the non-violent movements that gathered momentum early on have become increasingly sidelined, as the Free Syrian Army (FSA) has come to symbolise a more forceful response to widespread atrocities.

Following the mass killings in Houla, rebels declared Monday they would no longer respect Annan’s proposed ceasefire, on the grounds that President Bashar al-Assad had failed to observe their deadline last Friday to lay down arms.

The escalating violence has prompted the return of 81-year-old Islamic scholar and activist Sheik Jawdat Said to the region. After six months spent giving talks in North America on nonviolence and the Arab Spring, he departed last week to help renew the non-violent movement in Syria.

As an advocate for peaceful protest against the Syrian government, he is putting himself at great risk. “I am over 80. I don’t care what they do to me,” he told National Public Radio a few days ago. “I have always lived by these principles.”

Said helped inspire young Syrian activists to peacefully challenge the regime last year through his teaching and book “The Problem of Violence in the Islamic Action”, published in 1966. He renounces all recourse to violence in the Syrian movement, including that of the FSA.

According to Amr Azm, a Syrian-born professor of Middle East history at Shawnee State University in Ohio, Said influenced the “peace wing” in Syria.
“He’s important because he’s the last of what is holding that line together,” Azm told IPS. “Everyone else has moved to the military wing.
“Peaceful protests are still an integral part of the movement,” he said. But “‘Long Live the Free Syrian Army,’ is what people are chanting in a nonviolent protest.”

Meanwhile, Annan warned at the U.N. General Assembly Thursday that the country was becoming more radicalised and urged all parties in Syria to cease violence, emphasising that “the first responsibility rests with the government,” which has only intensified its unbridled assault on civilians, shelling cities and giving government-backed militia free rein with appalling consequences.

“The violence is drastically escalating and the sectarian strife has become unavoidable with the mounting numbers of explosions, torture, and massacres in many areas in the country,” Jasmin Roman, a Syrian youth activist, told IPS.

Roman recently visited New York as a member of the United Nations Alliance of Civillisations (UNAOC) fellowship programme, which seeks to improve trust and cooperation between the Muslim world and the West.

She told IPS that amid the violence, Syrians remained resilient in their efforts to rebuild their lives within the crumbling state.

“The hyperinflation, rising unemployment, scarcity and skyrocketing prices of essential food and non-food items are exhausting the Syrians and exacerbating their struggle to afford their daily basic needs,” Roman said.

Though the media spotlights the male militant aspect of the conflict, “Throughout the uprising, women in Syria have been significantly participating and contributing at various levels, organising themselves, distributing assistance, supporting the affected families, securing funds to help people, and even providing psychosocial support to the children,” Roman told IPS.

For the moment, Syria’s future tilts in the balance, resting on the implementation Annan’ peace plan. The plan remains the centrepiece of international intervention, pushed forward by the loosely defined consensus of the international community to increase pressure on the Syrian government and threaten consequences in the event of non-compliance.

What form the escalated intervention will take is yet to be defined, but Annan is resolute in his calls for unity, “For the sake of the people who are living through this nightmare, the international community must come together and act as one.”

*With additional reporting by Mathilde Bagneres.