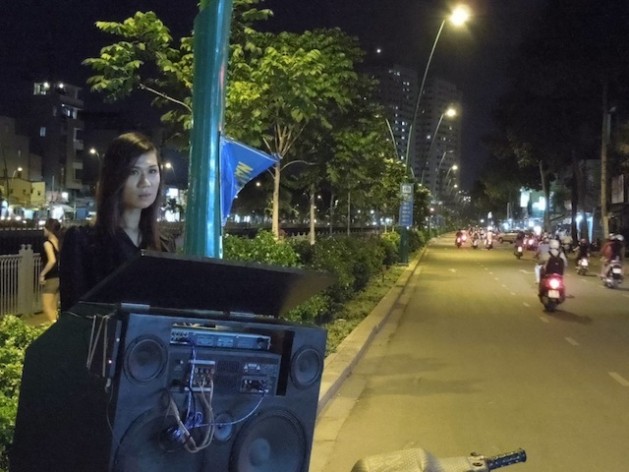 Like other pe de, "Duyen" sings mobile karaoke, stopping off at various restaurants around town to perform. Helen Clark/IPS

HO CHI MINH CITY , Jun 9 2012 (IPS) - The restaurant Thuy Linh sits by one of Saigon’s black, soupy canals at the edge of District Three. Though operating in an area already full of restaurants and cafes it doesn’t struggle for business.

Waitresses squeeze between plastic tables occupied by families and friends, continually dodging toddlers running in circles and screaming over the music.

Most patrons frequent the shop for the food. But there is something else about Thuy Linh that sets it apart from other eateries: most of the waitresses who work here are ‘pe de’, a common southern Vietnamese term for male-to-female transgender people.

“This shop was introduced to us as ‘pe de’ but we came back many times since the food’s good and it’s close to my place,” said one female diner, looking up from the Mekong Delta-style hot pot known here as ‘lau’.

Since Quan Thuy Linh opened for business on a street corner over a decade ago, it has attracted many pe de and a few gay men looking for work.

Hong Ngoc (37) has worked in her aunt’s restaurant for years as a waitress. She says the eatery was started by a pe de as a place where others could come for support or work.

“They (the waitresses) were disadvantaged as they came from other provinces where their families didn’t accept them,” she told IPS.

Vietnam’s big cities have become more liberal in recent years but the countryside, where some 70 percent of the 86 million-strong population lives, remains traditional and most pe de either have to struggle for acceptance from the community or “hide themselves”.

Hong Ngoc (her nickname) said she realised her own sexuality at the age of 16. “I was interested in clothes and beautiful things,” she yelled over the clatter of the restaurant. Though still ‘pre-op’ (a term used for pe de who have not yet had breast implants) her hair is long and her eyebrows thinly plucked.

“Most of (us) are gay from birth. When we get older we have the freedom to leave the family and become pe de.”

She said her family doesn’t know about her new life. On the rare occasions when she visits her home in Bac Lieu province in the far southern delta, she cuts her hair short.

Unlike its regional neighbours, like Thailand or Indonesia, Vietnam has no long tradition of a “third sex” and thus many people, especially in the more conservative north, struggle to understand the phenomenon.

People cannot yet change their names on government-issued ID cards nor can they receive treatment as women in government hospitals, according to local news reports.

Since political organising is anathema to Vietnam’s one-party system, the LGBT movement has not gained as much traction as it has in other countries over the last few decades. There is little cohesive organisation as gays, lesbians (“les”) and pe de keep mostly within their own groups.

However issues about gender and homosexuality are slowly gaining more prominence. Late last year a film about a rent boy in Ho Chi Minh City, ‘Hot Boy Noi Loan’ (Lost in Paradise), enjoyed a mainstream release with only a few cuts at local cinemas and received favourable press.

Gay marriage however is still illegal, following a 2000 ban after two women married. Most recently two southern families were made to pay small fines after their sons married and held a wedding party.

In Ho Chi Minh City, many pe de earn a living as entertainers, singing at parties, weddings and, often, funerals. The latter tradition, which likely originated in the old port area of District Four – once notorious for its heroin addicts and mafia strongmen – has become a popular trend in the past couple of decades.

Some pe de also find work as call girls but usually only after full operations.

Linh Trang (50) has been performing at events for over 20 years. She organises groups of pe de to sing at funerals and has watched the relatively new tradition take hold across the city and some parts of the countryside too.

She recalled that when she first began, her business was far more “underground” than it is today. Now, though police might still break up the party and chase away the performers, it’s more likely to be over noise problems than simple prejudice.

But life is not easy. “Some pe de live only by singing, some also rely on support from their families. Some have gone through surgery and make more as prostitutes,” Trang told IPS.

“Trinh”, a 19-year-old singer with Trang’s troupe, said, “When I was a little child my family used to beat me to prevent me from going out singing.” It didn’t work; these days she earns a living as a performer and dates one of the male singers in the group.

“Now, they (her family) agree with my work.”

The little public and social support available to pe de comes mostly from foreign governments or international NGOs. Earlier this year Australia donated some 100,000 dollars towards LGBT work in Vietnam.

“Gerry” Chen, also from Ho Chi Minh City, works as a volunteer for ICS, a local LGBT NGO. He says though his group works with gay, lesbian and transgender people there is not always a lot of incentive for collaboration between the various groups.

Though awareness has increased, he believes that it remains a little limited. For instance, he pointed out than many people still believe transgender and gay people are the same.

Chen blames Vietnam’s mainstream media for projecting a negative stereotype of homosexuality. “Vietnamese movies portray gay characters as really girly and they make people laugh – that is the (defining) gay characteristic,” he lamented.

Despite the stigma though, the tide is slowly turning.

Places like Thuy Linh offer an environment where pe de can work regular jobs, free from stereotyped roles as entertainers

“We’re eating here because the food is good, not because of the pe de,” a customer at Thuy Linh told IPS. “Pe de are just normal people.”