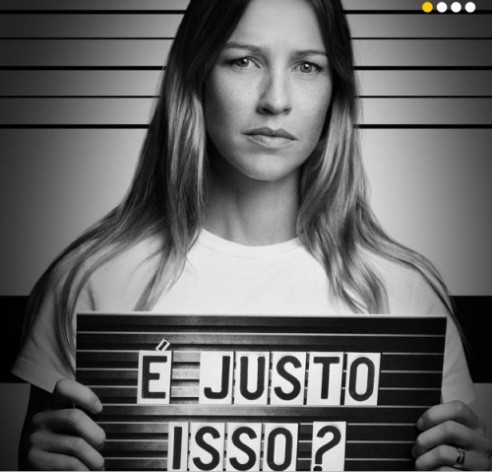 "Is this fair?" one of the images of Brazil's drug decriminalisation campaign. Credit: "Lei de drogas: É preciso mudar" campaign

RIO DE JANEIRO, Jul 12 2012 (IPS) - A host of academic, legal, health, political and social figures are joining together to back a campaign to decriminalise drug use in Brazil, as tens of thousands of consumers uninvolved in the drug trade are currently jailed.

The “Drug Law: It’s Time to Change” campaign is an initiative launched by the Brazilian Commission on Drugs and Democracy, which aims to gather one million signatures in support of a bill that will be introduced in congress during the second half of 2013.

Many movie and television celebrities, along with major political personalities, including former president Fernando Henrique Cardoso (1995-2003), have rallied behind this campaign that seeks to amend the country’s anti-drug policy act (Law 11,343/2006), which makes no distinction between users and dealers.

“I bought half a gramme of marijuana for my own use and I got caught. Because I live in a favela (shantytown), they threw me in jail like a drug dealer… In Brazil you can’t go out on bail while you wait for your trial, so I was in jail for months,” popular TV star Felipe Camargo says in one of the campaign spots aired since Monday, Jul. 9. While Camargo is playing a part, he’s conveying an actual case experienced by a young worker.

“Is that fair?” the actor asks. Other true stories are portrayed: a prostitute who went to jail because a client left traces of drugs in her room; a man who was arrested when the police found powder in his house that later proved to be yeast.

Since the current law came into force the number of people arrested in the country for possession of drugs doubled.

Drug use “cannot be linked to repression, prison and policing… it has to be linked to education, health and solidarity,” legislator Paulo Teixeira, of the governing leftist Workers Party (PT), stressed at the campaign launch. Teixeira will be introducing the amendment initiative in congress.

“The main aim is to decriminalise drug possession and use,” he said.

The changes proposed by the initiative include removing drug policy from the realm of law enforcement and turning it into a health and social assistance concern; decriminalising drug use by establishing a clear distinction between consumers and dealers; and providing quality treatment for drug addicts, incorporating support networks and families into a comprehensive substance abuse treatment system.

Pedro Abramovay, an attorney and law professor with the Getulio Vargas Foundation and president Dilma Rousseff’s former justice secretary, told IPS that 60 percent of the people jailed on drug charges in Brazil had no prior record and were arrested with small amounts of drug and unarmed.

“They fit the definition of a user more than of a dealer, but they’re jailed like drug traffickers because the law is unclear,” said Abramovay, who was removed from his position in the government, among other reasons, because of his defence of alternative penalties for small drug dealers.

A quarter of Brazil’s inmate population – the fourth largest in the world, behind the United States, Russia and China – is serving a drug-related sentence or awaiting trial on drug charges. This Latin American giant of 192 million people has 258 prisoners per 100,000 inhabitants.

According to violence expert Julita Lemgruber, director of the Centre for Safety and Citizenship Studies of the Cándido Mendes University, while the total number of inmates tripled in the last 15 years, the number of people arrested for drug dealing grew threefold in only a third of that time.

Brazil’s “insane” drug laws are also putting a greater number of women in jail, contributing to prison overcrowding and causing “huge” problems due to the poor conditions in women’s correctional facilities, Lemgruber said.

She notes that women represent six percent of Brazil’s prison population, but 14 percent of all inmates jailed for drug trafficking.

José da Silva, former national secretary of public safety and a colonel with the military police reserve corps, supports the proposed amendment, based on his experience in repression.

“Experience shows you that repression only aggravates the problem. More people die: drug users, police officers, dealers and people who have nothing to do with this whole business,” Da Silva told IPS.

And “it doesn’t lead to people consuming less,” said the police chief, who believes that resorting to repression to combat drugs is a battle that has been “lost”.

The campaign is not yet considering bolder measures, such as legalising the drug market, but da Silva thinks that that is also necessary.

“The model implemented in the United States when it decided to legalise alcohol is the model we should adopt for drugs…, legalise and control everything, from production to distribution and use, so control is in the hands of the state and not of drug dealers,” he said.

A similar system, but limited only to marijuana, was proposed just last month by Brazil’s neighbour, Uruguay.

Brazil’s amendment initiative is based in part on the decriminalisation model adopted by Portugal. According to Abramovay, drug decriminalisation in this European country led to more effective organised crime control and a dramatic reduction in the number of drug-related deaths. And not only did drug use not increase after it was decriminalised in Portugal, it dropped among the youngest segments, he told IPS.

The campaign is supported by the Rio de Janeiro organisation Viva Rio, which promotes a culture of peace, the National Association of Public Defenders, the Oswaldo Cruz Science Foundation, the Rio de Janeiro State Health Department, the Global Commission on Drug Policy and Avaaz, a global online campaigning community.

One of the celebrities involved in the campaign, actress Isabel Fillardis, said she was initially taken aback when she was approached by the organisers, as she had never used illicit drugs. But she decided to support the initiative when she heard the moving true cases presented in the spots, and, above all, because she realised that “it’s important to promote a debate” on an issue that is considered taboo in Brazil.

In the last few months, a number of popular Brazilian stars have spoken openly about their experiences with drugs. One of these personalities was musician and former culture minister Gilberto Gil, who spoke of his marijuana use.

Carlos Minc, current environmental secretary of the state of Rio de Janeiro, recalled how while serving as minister under president Luiz Inácio Lula da Silva (2003-2011) he was “admonished” for participating in a march in favour of decriminalising marijuana. Other government officials saw his behaviour as “advocating” drugs, he said.

“We need to end all this hypocrisy and repression,” Minc stressed.

In the governing PT, opinions are divided. “I spent eight years in the government, and I still support this government that has transformed Brazil, but we’ve reached a point in which it’s civil society’s turn to act,” Abramovay said.