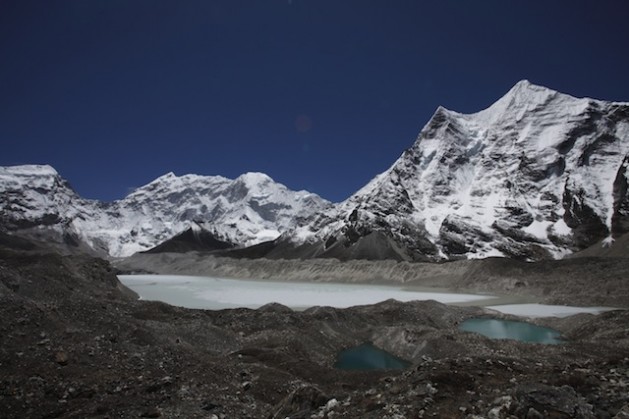 The Imja Glacier below Mt Lhotse has melted to form a lake where there was only ice 30 years ago. Credit: Bhrikuti Rai/Nepali Times.

KHUMBU, Nepal, Jul 21 2012 (IPS) - Every morning, as Gian Pietro Verza walks up the lateral moraine of the Khumbu Glacier in this Himalayan country’s north-east to take measurements, the wind makes colourful prayer flags flutter noisily. That same wind carries soot particles that are causing the snow on the mountains to melt faster.

The Italian scientist and mountaineer has been working at the Pyramid International Observatory below Mt Everest since 1987, and has seen the rapid retreat of the glaciers around him even in the last 25 years. “The ice used to come right up to there,” he says, pointing towards the jumble of boulders and gravel in the glacier. “Now it has retreated up beyond base camp.”

Agostino Da Polenza and the late professor Ardito Desio set up the Nepal Climate Observatory Pyramid (EvK2Cnr) in a unique collaboration between the Italian Research National Council and the Nepal Academy of Science and Technology, at an altitude of 5,050 metres in Lobuje.

The EvK2Cnr has been doing research into the effect of global warming on the Himalayas, and recently turned its attention to the impact of ‘black carbon’ on accelerating the melting of ice and snow.

Historical emissions of greenhouse gases by industrialised nations have traditionally been blamed for melting of the world’s permafrost, leading to sea-level rise. Today India and China have overtaken the rich countries in total greenhouse-gas emissions, and there has been a big increase in their black-carbon generation.

India alone burns 25 million tonnes of coal annually just to fire its brick kilns. Brick kilns in the Nepali capital Kathmandu are responsible for half the air pollution, which in winter sits at ground level due to temperature inversion. The soot particles from these smokestacks mix with diesel exhaust to form a layer of soot over southern Asia that is thousands of kilometres long and up to 4,000 metres thick. Prevailing winds waft them over Himalayan glaciers, melting them faster.

“Although glacier melting is predominantly due to global temperature rise, the deposition of pollutant particles like black carbon can enhance this effect,” says Paolo Bonasoni of the Italy-based Institute of Atmospheric Sciences and Climate (ISAC).

Wind-blown ash from huge pre-monsoon forest fires and their deposit on glaciers may reduce the albedo effect (reflectivity) of the snows by about five percent, and deposits have grown three-fold in the past 40 years, researchers say.

“It has been accepted that black carbon contributes to accelerated glacial melt, what remains is only the quantification of the effect for concrete analysis,” says Arnico Panday, lead atmospheric scientist at ICIMOD.

Monitoring the impact of black carbon on hastening glacial melt around the Himalayas is key because the region is known as the water towers of Asia, being the source of water for over one billion people. Asia’s major rivers, like the Ganga, Bramhaputra, Meghna and Indus, have most of their tributaries fed by snow melt from Himalayan glaciers. Accelerated glacial melt is likely to affect the availability of fresh water in countries downstream during the dry season and also adversely impact agriculture, irrigation and threaten the communities residing near river banks.

Pollution from rapid industrialisation of India and China is also carried by prevailing winds to be suspended permanently over the Indian Ocean in what UNEP calls the ‘Asian Brown Cloud’. These aerosol and soot particles result in surface dimming of sunlight and solar heating, decreasing the intensity of the south-west monsoon over India and a north-south shift in rainfall patterns in eastern China.

Many locals are also expressing concern over varying weather patterns. “It rarely snows for this long in May,” says Pasi Tamang of Namche. “The winter has become milder over the years and weather pattern in the past few years has been puzzling me.”

And yet Lobsang Sherpa, a hotel owner in Dingboche, a village in the Khumbu region, says that many small water bodies, including Imja Lake, have become larger. Says Lobsang: “The glaciers maybe melting faster because the number and size of the lakes around here have increased significantly.” He fears that the outburst one day of such lakes, especially the Imja, which lies above Dingboche, might cause havoc downstream.

Scientists discount anecdotal evidence of freakish weather, but say evidence of glacial retreat and receding snowlines is rapid and undeniable. They are trying to find which of the root causes are most to blame: natural warming after the Little Ice Age 600 years ago, global warming caused by carbon-dioxide emissions, and more recently, deposits of black-carbon soot on the snow.

Scientists say that instead of using global emissions of greenhouse gases as an excuse to do nothing, Asian countries should immediately start working on reducing solid pollutants caused by their increased use of fossil fuels. This would not just slow the melting of Himalayan permafrost, but also save them money from more efficient fuel-burning.

Simple lifestyle changes like switching to improved cooking stoves in the mountain areas would also help.

“Promoting clean air initiatives would address glacial melting as well as indoor pollution,” says Raju Laudari of the Alternative Energy Promotion Centre in Kathmandu, which promotes the use of clean cooking stoves that reduce firewood use by a third.

Cleaner brick kiln technologies are available, but their higher cost and lack of government enforcement in Nepal and India have kept old stacks belching away smoke. Greentech in India has tried out improved kilns that ensure more complete burning of coal, saving fuel and cutting soot emission. Similar projects have been tried out in Kathmandu, and the BrickClean Network has been encouraging kilns to clean up their act.

The best alternative may be to do away with kilns altogether and work with Compressed Stabilised Earth Blocks (CSEB), in which clay is mixed with cement in a 96:4 ratio and compressed with a manual compactor. The resulting bricks are even stronger than kiln-baked bricks, and do not cause pollution.

Back at the Pyramid in Lobuje, Laxman Adhikari helps monitor the instruments measuring black carbon. He has noticed the Khumbu Glacier below him recede further and further up the valley.

“If it keeps on melting at this rate,” he says, “I don’t think my children will know what glaciers are.”

(*This story, also published in the Nepali Times, was produced as part of IPS Asia-Pacific’s ‘Climate Change: A Reporting Lens from Asia’ series.)