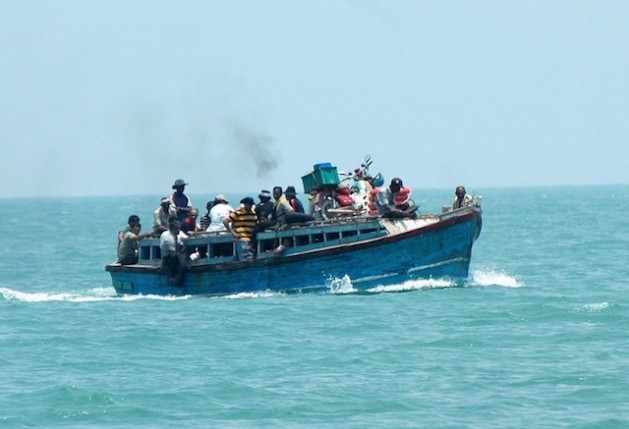 Desperate Sri Lankans and other nationals use trawlers like this to leave for a future abroad. Credit: Amantha Perera/IPS.

COLOMBO, Jul 6 2012 (IPS) - If you hold a Pakistani or Afghan passport, be prepared for an unusually lengthy immigration process on entering neighbouring Sri Lanka. Immigration authorities in the island tell IPS they have set up special procedures to check passengers from these two countries. This is after increasing evidence that this South Asian island country off the southern tip of India is being used as a departure point by illegal foreign asylum seekers taking boats, mostly to Australia. “We have special security measures to question Afghans and Pakistanis,” said Prabath Aluthge, head of counter trafficking at the Department of Immigration.

Addressing a meeting on trafficking and human smuggling at the Sri Lanka Press Institute last week he revealed that 25 Afghan passport holders were deported recently, while in the last five months 250 visa violators have been deported. Foreigners using fake Sri Lankan passports to gain entry and asylum have been rare, but not unheard of. Several among the 970 persons deported to Sri Lanka from Britain since 2009 were found on return to be Indians, and were sent back to India.

But the current trend with hundreds using the island as a staging point is a new development, local law enforcement officials tell IPS. On Jun. 21, a boat carrying around 200 Afghan and Iranian asylum seekers capsized off Christmas Island, about 2,600 km from the Australian mainland. About 90 of the passengers died. The boat is suspected to have originated from Sri Lanka, though direct journeys from the South Asian island to Australia, more than 8,000 km away, have been rare.

In the past many illegal asylum seekers used Thailand and Indonesia as transit points. That seems to have changed. “Sri Lanka has been identified as a transit point (used by human smugglers),” Aluthge said. The increasing incidents of foreigners using Sri Lanka to get on boats comes at a time when national security authorities have reported a spike in the number of locals taking the same risky route.

The police have made a string of detections in the past few months. On May 12, 113 persons were arrested in capital Colombo while being transported to a fisheries harbour to get on a boat. A month later the Navy arrested 53 people on a boat about 60 nautical miles off the coast. Smaller groups have been caught in between. Early last week a group of five was arrested near the southern city Kataragama.

“These days we are recording high instances of human smuggling activity,” police spokesperson Ajith Rohana said. “Ninety percent of the asylum seekers are from the (minority) Tamil and Muslim communities.” So, he said, were the main organsiers of the boats. Australian immigration officials have refused to divulge details of the number of boats that originated from Sri Lanka this year, citing security concerns. But publicly available information suggests that by the end of June this year, 72 boats were detected or reached Australia. There were 5,242 arrivals.

Immigration detention statistics released by the Australian Department of Immigration and Citizenship show that by end May there were 682 persons of Sri Lankan origin at detention facilities, making 14 percent of a total of 4,906. The largest was Afghans who made up 41 percent. Sri Lankans made the second largest group.

The Australian data also reveals an unusual rise of asylum seekers arriving by sea starting from January 2010. The number of persons at immigration detention centres, which was less than 500 in January 2009, rose to over 6,500 by January 2011. Sri Lanka’s long running civil war ended in May 2009.

According to Rohana, the most common modus operandi is for those expecting to take boats to wait in small numbers, around five to six to a group, near the coast. They would then be transferred in batches to a fishing harbour and most likely taken to a fishing trawler anchored out at sea. Rohana says locals who have been arrested for orgainsing such boats appear to be middlemen between those seeking a place on the boats and those controlling the smuggling networks.

“The core suspects have been found to be operating from countries like England, Europe and Australia,” he said. The police officer cited the case of more than 200 Sri Lankans who found themselves stranded in the West African state Togo in October 2011 after being abandoned by smugglers who had promised passage to Canada. “The four main suspects in that case are in France,” Rohana said. The victims had been moved to the African state by air through Mumbai and Addis Ababa in Ethiopia using genuine visit visas.

Details of how people get on to a boat remain sketchy. Most who wait for an opportunity or have failed in their attempts remain silent. Take the case of Akilan (name changed on request), a youth in his twenties from the eastern coast, now languishing in jail after a failed attempt at sailing to Australia. “We did not know anything until he was arrested,” his mother tells IPS. She said her son was planning to sit for his university entrance exam for the third time, but had been working secretly for his clandestine trip.

Boats have been detected originating from the north-western Puttalam coast all the way to eastern fishing ports like Valechchennei. The boats used are mostly wooden hulled fishing trawlers. The asylum seekers have to pay an equivalent of around 9,000 dollars in local currency in two instalments. According to police information, they are asked to pay 2,500 dollars before they get on board. Family members and friends pay the rest when – and if – they are dropped off at the destination.